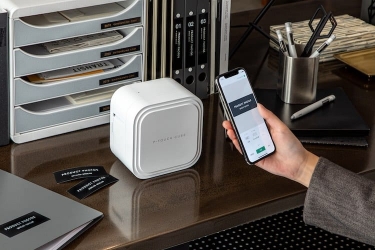 After unpacking the Brother Cube Pro PT-910BT, the new owner needs to install the battery (there's a slight knack to replacing its internal cover, but the advantage of a user-replaceable battery may outweigh that slight inconvenience), connect the printer to a USB charger using the supplied cable, and then drop in the tape cartridge and close the side panel.

The 36mm tapes are available in a variety of types (standard, matt. flexible, and strong adhesive), with colour combinations including black on yellow, and black, red or blue on white.

Brother suggests the wider tapes are useful for creating safety and hygiene labels to promote good practices as staff return to work after COVID-19 closures – presumably the yellow tapes would be particularly attention-grabbing.

A sample cartridge of black on white laminated tape is provided, and this type of tape seems durable, resisting our attacks with a door key. 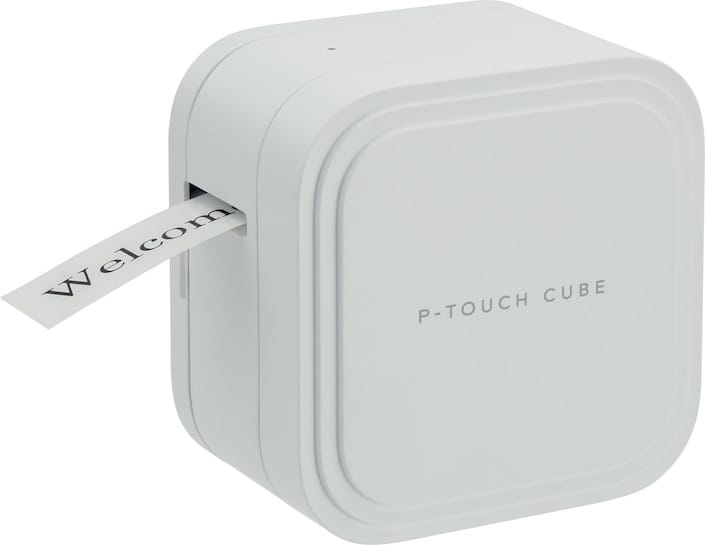 A fully-charged battery is said to be good for up to five tape cartridges, but with just one cartridge we were unable to test that claim. That should be more than enough for most users, as that's roughly equivalent to 600 5cm-long labels. In any case, the battery only requires a charging current of 0.5A, so any decent powerbank should be capable of topping it up if necessary. You could purchase a second battery, but there's no provision for charging it outside of the printer.

The Cube Pro (no, it's not really cube shaped) has a Bluetooth interface for use with mobile devices running iOS or Android, and computers running macOS or Windows can also connect to it via USB.

For some reason, Brother has not updated its existing P-touch Design&Print app to support the Cube Pro, but has instead released a separate app – P-touch Design &Print 2 – which does not seem to be compatible with earlier P-touch models such as the PT-P710BT, or the VC-500 colour label printer.

P-touch Design&Print 2 provides a wide range of templates, largely for business purposes, and custom labels can be created with up to five text boxes, 10 pieces of clipart and two images.

Interestingly, the content of text boxes can be OCRed from images captured by the camera, and there's also provision for using Google's translation system. We tested these features together by taking a photo of the Cube Pro's instruction leaflet, cropping it down to what appeared to be Chinese characters (yes, we're showing our ignorance). The OCR turned the image into the corresponding characters, which translated to "China". We tried reading several other pieces of text this way, and all were successful.

An extensive symbol library includes office items such as a pencil and a filing cabinet, tech items such as a mouse and the Wi-Fi icon, representations of sports such as golf and skiing, and wardrobe items including shirts and shoes.

The iPrint&Label app does work with both the Cube Pro and the PT-P710BT, but it only has templates for 24mm and narrower labels. It automatically scales labels to fit the tape, so a label that's 85mm long on 24mm tape comes out as 147mm long on 36mm tape.

Custom labels can easily be created with even more flexibility than Design&Print allows. There's provision for text, photos (from the album or directly from the camera), details from the device's contacts list, barcodes and QR codes, and symbols (a similar but not identical collection to that in Design&Print 2).

Whichever app you use, designing a label isn't difficult, but it is more tedious than might be expected. Every new item is appended to the right side of the label, with its height or font size set to fit the width of the tape. This means you're likely to be in for a lot of resizing and rearranging, but it's worth putting in the effort as you won't want to waste tape.

Two tips: be sure to check that the tape size is correct before starting on a new design, and be careful to avoid accidentally moving an item you've already moved into position.

Whichever method you use, the results are very pleasing, and you might be surprised how good a job the 360dpi Cube Pro does when it comes to printing photographs, despite the limitations of its monochrome mechanism. They aren't picture perfect, but they are certainly good enough to show that a visitor's badge was issued to the person wearing it, for example.

One irritation is that the printer must be re-selected each time it is turned on. Even when the app remembers the last-used device and there are no other compatible printers in range, they do not automatically reconnect.

You need the P-touch Editor application to use the Cube Pro with a computer. Brother's installer for Windows 10 worked successfully for us and allowed connection via USB or Bluetooth.

We ran into a snag on macOS. The Mac installer adds some software to the system, and prompts you to download P-touch Editor from the Mac App Store. That version is required for the Cube Pro, and you must update any non App Store version that may have been installed for an earlier P-touch printer. Old versions do not appear to check for updates.

Connecting a Mac to the Cube Pro via USB is just a matter of following the instructions, but the process for Bluetooth seems to be undocumented. Brother explained that the trick is use the Bluetooth system preference to connect the computer and the printer in the normal way, but to press Cancel when the "Set up this Printer" sheet appears.

P-touch Editor is broadly similar to iPrint&Label it that it provides a good range of label templates (though none for 36mm tape) and plenty of flexibility for designing your own.

Labels can contain text, frames, images (though there's no integration with macOS's Photos application), symbols (from fonts such as Dingbats and Symbol), clip art (which, somewhat confusingly, is called symbols in the mobile apps), shapes, tables (cells can contain text or graphic elements), barcodes, and even a calendar for the month.

By default, date and time fields print according to the time the label was designed, not when it was printed. We suspect that's the reverse of what most users would want, but the default can't be changed – each date or time field has its own "Auto" attribute that can be ticked to make the label show the time it was printed. 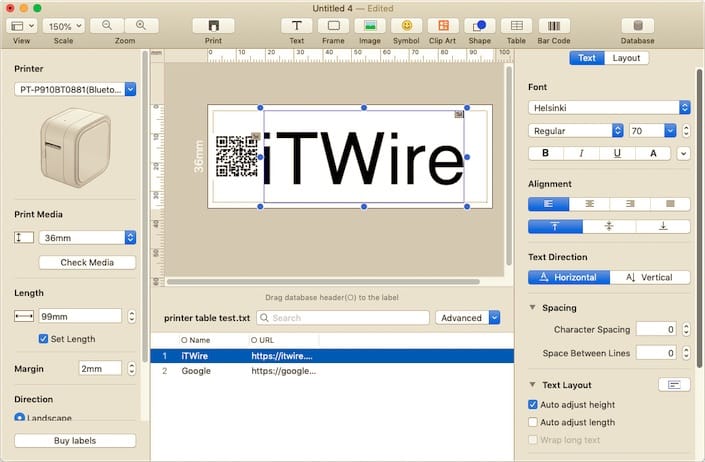 Text fields can be automatically populated using records from the Address Book or from data files. If a field contains data that varies significantly in length (eg, "Cardi B Feat. Megan Thee Stallion" versus "BTS"), you probably want to position it at the right-hand end of the template to avoid some labels printing with a lot of white space. Labels can be fixed length – handy when you want a uniform appearance, eg when labelling spice jars or ring binders – or you can allow the length to adjust automatically according to the contents of the rightmost field.

Once you get past the incomplete documentation, Brother's P-touch printers are very useful for producing a wide range of adhesive labels, and the $549 Cube Pro brings additional flexibility by accommodating 36mm wide tapes.

More in this category: « Review: HP Neverstop MFP 1202nw Review – ASUS ExpertBook B9450 »
Share News tips for the iTWire Journalists? Your tip will be anonymous