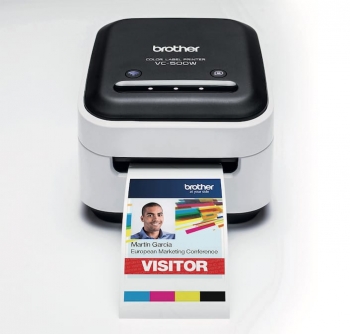 The latest addition to Brother's family of label printers brings colour printing for the first time.

Brother's previous label printers such as the P-touch PT-P300BT and PT-P710BT were limited to printing in one colour. Depending on the tape selected, that could be black on white, black on yellow, black on gold, white on silver, or some other combination.

But the Brother VC-500W uses the Zink thermal photo-printing technology that allows full-colour printing on white tapes. The way it works is that microscopic crystals are embedded in the tape, and heating them to different temperatures reveals different colours.

The initial setup seemed easy, especially as the only physical connection is the brick-style power supply. The mains cable is on the short side at 0.5m, but the figure-of-eight connector means it could easily be replaced with a longer one if necessary. The captive low-voltage cable is just long enough to reach from the floor to the desk top.

There's a choice between connecting the VC-500W to an existing Wi-Fi network, or connecting a device directly to the printer via Wi-Fi. Since we planned to test it with both a phone and a computer, we selected the former option and were soon printing.

All went well, but the printer had lost its network settings when we switched it on the following day, and we had to repeat the process. This time a firmware update was installed during setup, and whether or not our problem really was firmware related, the settings stuck after that.

There's also the option to connect via USB, but these days who has just one device?

As with other Brother label printers, you can reduce the amount of wasted tape by printing multiple labels one after the other without ejecting the tape. If you print and eject one label, approximately 15mm of unprinted tape is consumed by the tabs that are left at each end to make it easy to peel off the backing paper. When printing multiple labels, those tabs are left at the beginning and the end of the job, with just 4mm spacing between successive labels, ensuring one label doesn't bleed into the next, and that each label is printed right up to (slightly beyond, in fact) the cut line.

One application suggested by Brother is to print visitor badges that include a photo of the guest. That would prevent discarded badges being reused by intruders. Other uses include custom labelling for small-batch makers (bakers, craftspeople, etc) and other small businesses such as cafes. And of course there's the everyday labels needed around the home or workplace. 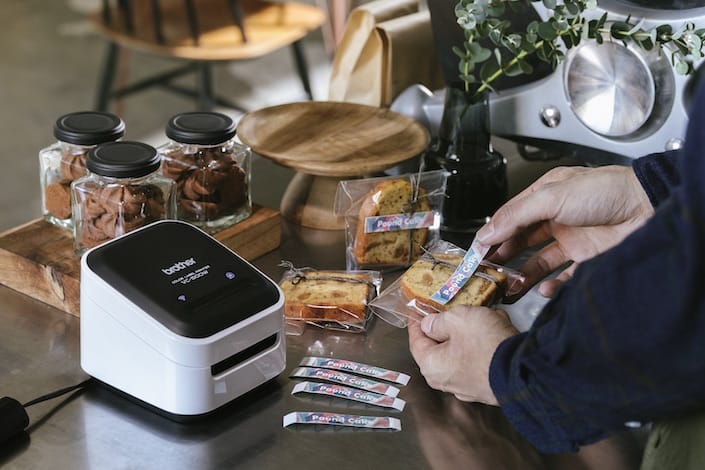 The tape is supplied in 5m rolls and comes in five widths: 9, 12, 19, 25 and 50mm wide, with prices ranging from $24.95 to $49.95. That's might not sound cheap – it means a business-card sized label costs about $1 – but it can be competitive with commercial printing, as a well-known printing company charges much the same in small quantities. It's only when you order at least 100 at a time that the commercial service becomes significantly cheaper. And the Brother device allows you to print on demand, so you need never run out of labels.

A certain "surveillance camera in use" self-adhesive sign costs around $7.50. The cost of printing a similarly sized though probably less rugged label on the VC-500W is approximately $2.50. 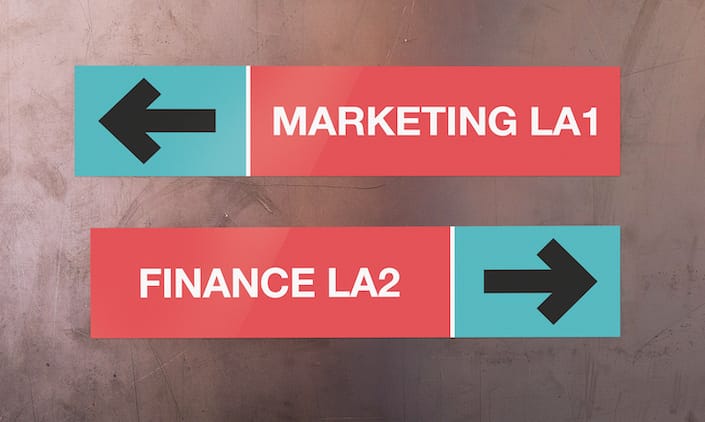 The VC-500W is supplied with one roll of 25mm tape, plus a cleaning cassette. It's possible to remove a part-used roll in order to change sizes, but you must first press the cassette button on the top of the printer and wait for the tape to unload. As far as we could see, no additional tape was wasted when a cassette was removed and replaced.

The tape seems durable. We attacked a label with a key, and while the surface wrinkled slightly it did not tear and there was no effect on the printed image. We attached a label to a brochure, and the next day we were able to peel it off without damage to either.

On the software side, there's the Color Label Editor app for Android and iOS, and the P-touch Editor software for Mac and Windows.

Color Label Editor has an individualistic design user interface. For instance, the Trash button doesn't get rid of the label you're working on; it just deletes the selected element. Unless you're looking through your library of designs, in which case it really does delete the design.

And when adding a photo, we would expect it to be scaled to fit the width of the tape by default. Instead, it seems to be scaled to an arbitrary size that isn't an obvious fraction of the label's dimensions - slightly more than half its width. Since resizing occurs around the centre of the image even if it is positioned in a corner of the label, the user is faced with a tedious cycle of "adjust size, adjust position, repeat" in order to get the desired result.

If you just want a text label, perhaps with a background pattern and/or a frame, that's simple enough. There are collections of clipart that can be used to adorn labels, but most are suited to domestic rather than business applications.

We found P-touch Editor easier to use than Color Label Editor, partly due to the snap-to guides (eg, to the centreline of the label) that appear when adjusting the position of an element, and also because the interface seemed less modal so consequently we spent less time wondering "how do I get from here to where I want to be?"

A useful feature is the ability to load a data file or access the user's contacts list for mail-merge style label printing. Examples include address labels, or name badges that include people's job title or organisation. However, the software would not print a set of labels when we selected multiple records. It only generated a single label corresponding to to the record closest to the top of the list.

According to Brother, this is because the printer uses macOS's AirPrint driver. Apparently consideration is being given to the development of a CUPS driver, which would overcome this shortcoming. The company says printing multiple labels based on records selected from a file does work in the Windows version of P-touch Editor.

The VC-500W's print quality is up to the job, but with the exception of black text the overall result has a slightly soft appearance. All of the labels we designed looked better printed in vivid rather than standard mode. In general, standard mode gave a washed-out appearance, especially in mid-tones. In some cases, the colour printed was significantly different to what was shown on-screen. For example, what appeared bright green text on the phone came out as an olive shade in vivid mode, and what we can best describe as a sandy khaki in standard mode. You could tinker with the colour controls in the app (Settings, Advanced), but that risks wasting a lot of tape in order to achieve the desired result.

if precise colour accuracy is important (eg, your business has trademarked a specific colour along the lines of Cadbury's purple or Kodak's yellow), the VC-500W might not be right for you. Otherwise, Brother's new label printer does the job once you've come to grips with the software, and the only real question is whether you actually need a device like this.

With an RRP of $329, the VC-500W is available now from Officeworks' web site (currently listed at $279) and in Officeworks stores from 15 July. Brother authorised resellers will have the product from 15 September.

More in this category: « Hands on with MSI’s new gaming laptops Review: Ballistix Elite 3600 memory module »
Share News tips for the iTWire Journalists? Your tip will be anonymous