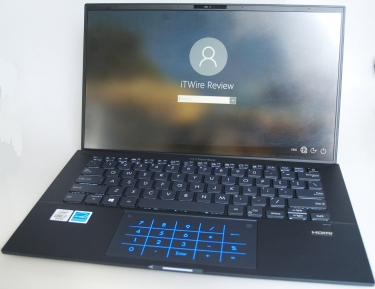 Weighing in at just 995g with the (claimed) 24-hour battery, this is the perfect machine for the on-the-go professional.

Let's start with a few statistics and then dive in. Although offered around the world in both Intel 10th generation Core i5 and i7 versions, ASUS has only made the i7 unit available through Australian retailers. For this, you will get 16GB RAM, a 1920 x 1080 14" lie-flat but non-touch display, 2TB of SSD along with all the expected connectivity options. The review unit had Windows 10 Pro installed.

The ASUS reviewers' guide spoke lovingly of the craftsmanship required to get the weight so low and maintain strength. We won't bore you!

Unpacking the unit, there's not a lot in the box aside from the laptop itself, the charging cable, a faux leather sleeve, a HDMI - RJ45 ethernet adaptor cable and the obligatory warranty and safety booklets (in about a million languages!).

Simple benchmarking told us that the unit performed within the expected range for the equipment it contained and there was no significant performance degradation when switching from mains-power to battery. Despite being described as a 24-hour battery, our own testing suggested that 15 hours was a safer estimate while using typical productivity applications. But that still makes for a very long day of continuous use; recharging was also exceptionally quick. Under heavier loads the system didn't seem to get too hot, and the fan stayed relatively silent.

The laptop included typical authentication features, including a fingerprint sensor and an infra-red camera intended to permit Windows Hello authentication even in the middle of the night. We're sure there's a reason for this.

As usual with these machines, there was a fair amount of 'bloatware,' which buyers may or may not find useful, although in a corporate environment (where this machine will likely find a place) it would be highly doubted that any of this would remain once the IT team was finished with it. We found these packages:

My ASUS – a troubleshooting and system optimisation tool.

ASUS Business Manager (ABM) – According to an ASUS representative, the ABM is "Designed for small businesses which lack adequate IT management, ASUS Business Manager simplifies the processes of management and maintenance while providing an extra layer of security to SMB Business, such as File Shredder enabling to completely delete file with US Army AR380-95, DoD 5220.22-M and DoD 5220.22-M(E) Standard. It is user-friendly, free and pre-installed on all Asus Expertbook B9450 & P2451. Further details for ASUS Business Manager (ABM) are in the attached" (we were supplied with an extensive user document for the software which helped with our understanding).

Audio Wizard – this is intended to "enhance" the audio experience, although with the typical tiny speakers which project sound from underneath the unit, we're not convinced much could be done to improve anything. The sound was probably better than most similar laptops with good high-end, but lacking significant bass. We'll take a headset or external speakers, thanks.

Mcafee LiveSafe – included on the system, but we remain entirely unclear as to why anyone would persist with this.

The screen was of a very high quality with excellent viewing angles. The hinges were constructed to raise the keyboard on a small angle to assist with typing. In addition the trackpad has a built-in illuminated num-pad, allowing ASUS to do away with the annoying angled 'fake' numpad built into the letter keys to the right of the keyboard. Activate the pad with a long press on the icon to the upper right. The calculator app may then be launched by the icon to the upper left which also serves as a brightness control for the pad illumination.

The keyboard feels good to type on, although the key-travel is relatively short with only lightly scalloped key-tops.

Wi-Fi roaming is enabled too. Thus as you move around a location, the laptop will be searching for stronger signals for which it has valid credentials and will connect automatically.

…and now, our dislikes…

The position of the fan beneath the laptop seems to choke air-flow. We would consider it a better option to vent through the sides of the unit.

Despite loving the feature, we sometimes had difficulty activating the illuminated numpad and further, the trackpad itself felt quite mushy with ill-accepted clicks.

Even with its cute little privacy screen, the inbuilt webcam was not particularly good. Most owners will quickly want to purchase an external USB unit.

Finally, who on earth put the power button right where we'd expect the Home key to be (well, it's there on our own machine!). Turning off or sleeping, depending on your power configuration, is not what we'd generally expect! Can someone please move the power button somewhere out of the general keyboard area!

The ExpertBook B9 i7 as reviewed retails for $3449 and is available at these locations (according to the ASUS representative), although we quickly discovered other on-line sellers.

Be aware that most retailers are discounting below recommended retail, but also that typical US pricing converts to less than $2400. It's a pity we can't pick one up on our next trip over!

Broadly, we like the machine, but we'd probably rush out and buy a travelling mouse and a webcam to fix those small problems.