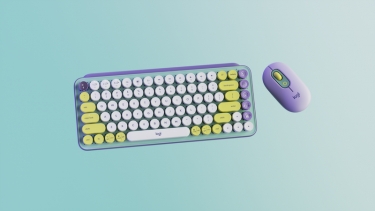 You may have seen Logitech's beautifully colourful Popkeys emoji keyboards in JB Hi-Fi, EB Games, and other stores and wondered what they were like. iTWire can tell you.

Logitech released the keyboard - along with a series of similarly colourful mice and desk mats - in October. These fashionable devices come in three colours for the Logitech POP Keys keyboard and POP Mouse, namely daydream mint, blast yellow, and heartbreaker rose. The Logitech Desk Mat comes in rose, lavender, and grey.

These items have been made to reflect personality and creativity. They’re in contrast to the eminently more conventional Logitech MX keyboard and mouse range (which this writer uses), but that’s ok; the target market is not middle-aged men. Instead, these are for big personalities who love colour and customisation.

iTWire tested the POP Keys keyboard, and it is a straightforward Bluetooth keyboard with long battery life, the ability to pair with multiple devices, and a solid, tactile, mechanical - if typewriter-like - feel. For me, it’s a functional keyboard, but where it stands out is with the Gen-Z person who loves self-expression. My 12-year-old daughter, for example, loves the keyboard and immediately claimed it for herself. She says the keyboard is beautiful and loves using it, looking at it, and certainly the emoji feature which we’ll come to in a moment.

iTWire received the blast yellow keyboard for testing, though intriguingly it’s the keys around the outside left and right sides that are yellow. The regular letter and number and space keys are all white. The ESC key stands out as being a rich, dark, purple - a key so lovely that my daughter said she wants to rip it out of the keyboard and place it on her wall, so entranced was she by its colourfulness.

Actually, there are keys that come off. Down the right-hand side are four special emoji keys with particular symbols (and a fifth key to launch an emoji selection). These are hot-swappable, and you have an extra four with different symbols in the box, so you can chop and change as you wish. You thus have eight different emoji keys to choose from, each with a different emoji. However, you’re not limited to what’s on the button. The keycaps are really only an icon on a key - the magic happens through the free software download Logitech Options; this software allows you to assign an emoji to each key irrespective of the picture on the keycap itself. Thus, you have unlimited capability to express yourself, being able to assign four of your most favourite emojis to specific keys and use the fifth key to bring up an emoji menu to choose any other emoji as the situation demands.

I certainly love mechanical keyboards for their strong feeling as well as, sometimes, the clackity clack noise following my fingers if I am feeling particularly productive. The Logitech POP Keys keyboards have a retro look with rounded keys and evoked strong memories of a typewriter, a device my 12-year-old daughter has probably never seen.

For each POP Keys keyboard, there is a POP Mouse to match; iTWire has not seen the mouse in the flesh, or plastic perhaps, but it is similarly wireless, slim and lightweight, and features high-precision and speed-scroll modes, along with built-in software to copy-and-paste text, images, and files between computers. With the keyboard and mouse both providing multi-device support, this is a pretty great feature for inserting media from your phone, say, into a conversation on your tablet, or laptop, or desktop.

See it in action here:

More in this category: « The PNY XLR8 Gaming 16GB RAM kit kicks the competition - and looks good doing it Turn your laptop or tablet into a battlestation with the Aten USB-C multiport mini dock with power pass through »
Share News tips for the iTWire Journalists? Your tip will be anonymous