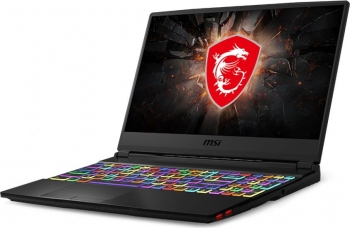 We’ve been impressed by MSI’s all-rounder notebooks for a couple of years now.

These are notebooks which offer the perfect quadrafecta of power, a lightweight chassis, decent battery life and a war chest of connectivity. They’ve traditionally been used by gamers and workers who like gaming but, thanks to a third market - designers - they’ve also now become much quieter and less garish.

The MSI Raider GE65 9SE is a big brother to such devices (and this is the 2019 refreshed model). The increased bulk comes with more space for an edge-to-edge keyboard and a 15.6-inch screen. The narrow bezel and full use of chassis space means that it rivals some 14-inch laptops in terms of square-footage.

We approve of the styling which isn’t quite as ostentatious as some of the older MSI notebooks. The matte-finished lid with red stripes and embossed-dragon shield logo is sharp enough to impress at LANs while not looking out of place in the boardroom. The lid feels solid and has minimal flex too (at least for a screen that’s this thin). 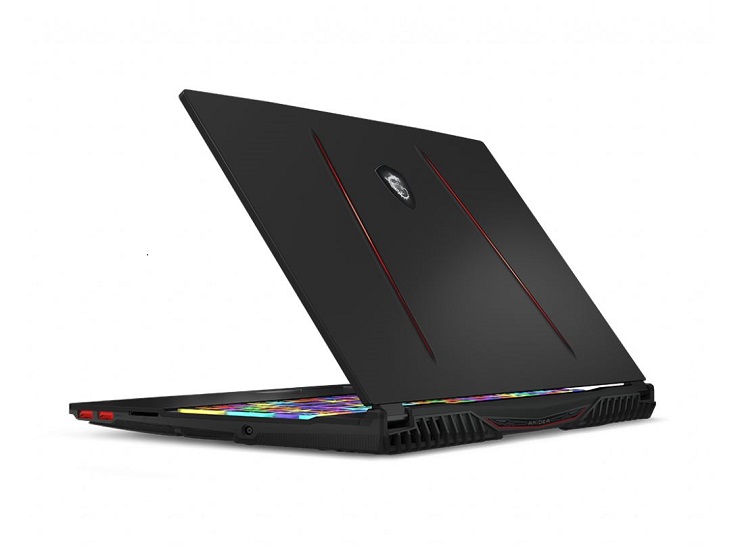 The MSI Raider GE65 9SE is stylish without standing out. Except when the keyboard lights are on.

Turning it on and it’s the SteelSeries keyboard that catches the eye. The well-spaced, Scrabble-tile keys are firm but comfortable to type on – offering a good degree of travel that’s responsive to gamers and wordsmiths alike. Each one is also individually lit with programmable-RGB lighting and the clear edges and translucent letters produce a pleasing visual effect when illuminated. There’s also full-size arrow keys and a (nearly) full-size number pad. Meanwhile, the multi-gesture trackpad is very responsive and so are its buttons.

The screen is available with 144Hz and even 240Hz variants. We’ve found the latter to be expensive overkill for most situations although it can make racing games look a little smoother. We were impressed with its crispness, colour reproduction and ability to get very bright indeed.

Under the hood are the latest Intel 9th-Gen. processors which go all the way up to the octa-core i9. This can be paired with two SDRAM slots, two M.2 PCIe hard drive slots (one of which can be switched out for a SATA pr0nstacker) plus Nvidia graphics that stretch up to RTX 2070. Our test model sported a hexa-core Core i7-9750H (which runs at 2.6GHz stock speed with a 4.5GHz Turbo Boost), 16GB RAM, 1TB NVMe drive, 1TB SATA drive and Nvidia RTX 2060 graphics.

We ran it through PCMark 10 where it scored an impressive 5,677 which, Futuremark assures us, is better than 82% of all results submitted and is significantly higher than a typical 4K gaming PC. Meanwhile, it scored 14,202 in 3DMark FireStrike and 7,457 in FireStrike Extreme. With the screen-resolution limited to Full HD there's not a game it won’t waltz through.

Connectivity is typically excellent too. On the left reside Ethernet, mini DisplayPort, HDMI, USB-C and USB-A ports (version 3.2 Gen 2) plus two audio jacks. On the right are two more USB 3.1 Type-A ports version 3.2 Gen.1) plus a full-size SD card slot. Meanwhile, a Full HD webcam sits in the top of the screen.

The built-in speakers get moderately loud and punchy but there’s not much bass – not that we expected much from a chassis this size.

Meanwhile the intricate ‘Cooler Boost 5’ cooling system, with its twin fans and seven heat pipes, produces a soft, fluctuating whirring noise during general usage (it’s not obtrusive, but it’s not silent enough to be unheard in a quiet office). It can ramp up when all the components are fully fired up. However, MSI’s Dragon Center app lets you tailor fan speed and performance to suit your environment.

The 51Wh 6-Cell battery isn’t the greatest but does play back movies for about four hours. That’s middling for notebooks of this ilk.

At 2.27KG it’s not as light as its smaller brethren but it’s still very powerful for its size. Our SKU cost a reasonable $3,199 and all purchases come with a two-year warranty.

There are not-dissimilar rivals available form Asus and Gigabyte, but while we’ve seen better battery life from those, we prefer the all-round usability (i.e. keyboard layout) and cooling prowess of MSI. As such, if you need a portable, powerful beast, this refreshed Raider makes a great choice.

More in this category: « REVIEW: Make your Google Home speaker portable with a beaut JOT or LOFT battery base from Ninety7 Tranya Rimor True Wireless earbuds »
Share News tips for the iTWire Journalists? Your tip will be anonymous