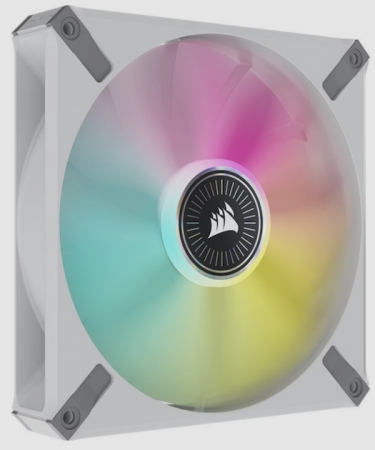 Corsair's range of premium-grade RGB-enabled devices and components has been expanded with its recently released magnetic levitation fans that simultaneously keep your computer operating cool while looking cool.

Yet, not all fans are equal. They all spin, sure, and suck in cool air or suck out hot air, but some do it better and can look better doing it. Enter the Corsair ML140 RGB Elite; this is a 140mm (hence the model number) fan for a tower case that concentrates airflow deeper into the case before being dissipated. A general fan pulls air in where it immediately spreads out into the case and quickly dissipates. Corsair’s AirGuide technology gives you airflow that reaches deeper into your case, but importantly, also allows you to focus airflow where you want it. By applying multiple fans you could focus air on, say, your processor, RAM, and GPU, and use another fan to focus air elsewhere. Corsair’s testing demonstrates improved CPU temperatures as a result, which leads to longer, quieter gaming sessions.

So, while you might think as long as a fan spins it's doing a good job, the reality is you can improve your computer’s longevity by picking the best fan for the job - just like you can improve your disk and RAM speed and capacity through improved parts, your fan is also an upgradeable item. And, in fact, it’s a pretty cost-effective upgrade with the fan available for as low as $53.

The fans are powered by magnetic levitation bearings which means they produce little friction, generate low noise, and have longer-lasting durability than traditional bearing fans. Does your fan buzz and whine and sometimes even rattle? No more, with the magnetic levitation of the Corsair ML140 RGB Elite.

And, of course, the fans are equipped with eight ultra-bright hub-mounted RGB LEDs to show off your PC build and fit into the rest of your iCUE RGB lighting that reacts according to your game, or pulses with life according to your mood.

iTWire installed a pair of ML140 RGB Elite fans on our computer. This machine was starting to make some noise from the fans - both when playing a modern graphically-intense game such as Tiny Tina’s Wonderland where the fans ramp up as the GPU kicks in, and from some general fan rattle and wobble. The fans brought the noise down - so much so that the former roar is a barely-heard whir, and the squeaks and rattles have disappeared. What’s more, the same colour scheme that blinks and flashes with colour on our M65 RGB mouse, K100 RGB keyboard, and Virtuoso RGB wireless XT headset now extends to the fan too, all through iCue - or through gaming titles themselves; Tiny Tina’s Wonderland is one such title that will automatically set a colour scheme of its own if you have iCue running. I didn’t realise this initially until I noticed - on a death screen, of all things - that my computer was proudly displaying the same lights I was seeing on screen.

Installation is a snap; you simply fit the fan into place, affix the screws and plug in the single connector cable. That’s it! Of course, make sure you have the right fan size. While iTWire looked at the ML140 140mm fan, Corsair does have other options and you can buy the fans in multi-packs too.

See your Corsair rig glowing with colour in Tiny Tina's Wonderland. All you need to do is have iCue running while you play the game.

More in this category: « The SanDisk Professional G-DRIVE ArmorATD is the ruggedised USB HDD for the adventurer in us all The Poly Studio P21 makes your online calls a cinch, looking good and sounding good »
Share News tips for the iTWire Journalists? Your tip will be anonymous