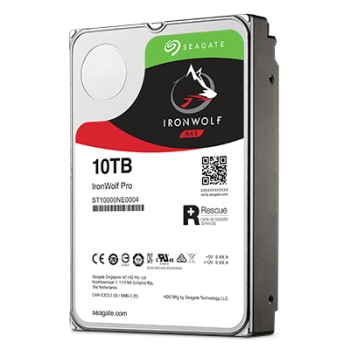 The perfect NAS drive has arrived. Reliability, speed, and capacity are all combined in Seagate's IronWolf Pro.

Despite its fairly regular and unassuming packaging and typical 3.5" form factor, this is no ordinary hard drive. The IronWolf Pro comes in models from 2Tb through 10Tb, delivering massive amounts of space.

Seagate has achieved 10Tb in a typical 3.5" case using Perpendicular Magnetic Recording discs and by using helium, instead of air. As helium is less dense than air, it reduces the drag on spinning discs and permits thinner platter discs.

However, it's not just a freakishly big hard disk, it's also a powerful and serious device. This is where the "Pro" comes in.

The drive is engineered for constant 365x24x7 uptime and performance, leveraging a series of smarts to help achieve optimal reliability, which Seagate has dubbed AgileArray technology.

iTWire took the 10Tb Seagate IronWolf Pro for a spin – quite literally, of course, the unit having a mechanical platter. We found it simple to install, particularly in a NAS with dedicated drive bays. In a PC it is a little more complex due to the variation in how to unscrew the case, the need to remove some dust, and then find a spare cable. Beyond that, it is simply a matter of installing "just" another hard drive.

However, you typically would not use a monster drive like this in your regular PC. You could, most definitely, and it would work well and deliver robust performance as well as mass storage. You would also pay a higher price for features a single-user PC would not typically tax the device on such as concurrent multi-user access, which the Pro is designed to eat up.

Instead, you'll find the drive purrs within a NAS. We obtained write speeds of over 230MB per second and reads over 250MB per second.

Performance aside, the disk provides comfort with its large capacity. Ten terabytes is a tremendous amount of space for a single disk. You can store high-quality video, complete system back-ups, even back-ups of all the email in a 100+ user organisation without much concern for space.

Yet, while the device offers health management and built-in smarts to protect your data from loss, it is also prudent to run your NAS in a multi-disk fault-tolerant RAID environment. The very "R" in RAID stands for "redundant", and the basis of RAID is to span your data across multiple disks with combinations of duplication and checksums depending on your mix of capacity and read and write performance requirements. Thus, simply put, you would not typically buy just one IronWolf Pro drive but multiples.

For those without the budget to fill an eight-bay NAS with eight x 10Tb drives, the IronWolf Pro comes in smaller capacities, as does its little brother, the non-Pro IronWolf. The drives include a 6Gb/s SATA interface and the drives from 6Tb onwards offer 7200 RPM spindle speed.

This really is the ultimate NAS drive. While I can't really say you should buy it for your desktop, it may well be worth considering for situations that demand capacity, performance and reliability.

The RRP is $689 for the 10Tb IronWolf Pro. The price reduces for lower-capacity and non-Pro models. 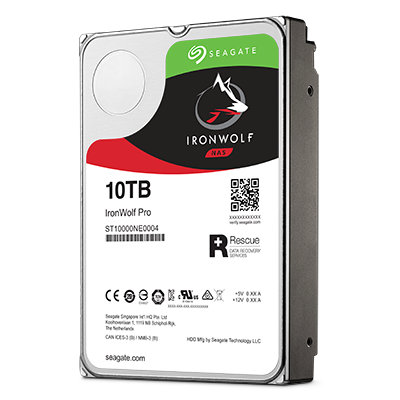 More in this category: « Samsung Galaxy Book 12 – taking Windows on the road (review) AMD Ryzen 7 1700 processor – two happy months in the saddle »
Share News tips for the iTWire Journalists? Your tip will be anonymous