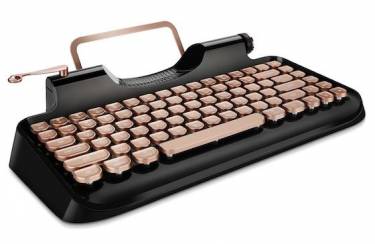 Bring some old-school style to your fingertips with this retro keyboard.

Retro is definitely a thing.

Apart from the ongoing interest in mid-century furniture, it's not hard to find items such as radios and record players styled like their 60s and 70s predecessors, and the styling of the popular KitchenAid stand mixer dates to the 30s.

Now KnewKey is preparing to launch the Rymek keyboard that is styled after 1950s typewriters.

The piano black "frame" (a white version is also available), unusually shaped keys and other design elements convey retro style with contemporary functions. The faux carriage return lever toggles between USB and Bluetooth connectivity (the Rymek can pair with up to three devices, such as a Mac, an iPad and an iPhone), the "platen knob" serves as a volume control (press to mute), and the "paper rest" acts as a support for a smartphone or small tablet.

Unlike real typewriters, the Rymek has backlights under each key, and a row of lights above the keys echoes the appearance of typebars.

The keycaps are moulded from a slightly translucent white plastic with an opaque, bronze coloured skin. Your reviewer is notoriously hard on keycaps, and his keyboards have been known to show signs of wear after as little as a week's use – but that was not the case with the Rymek.

The (pre-production?) sample we received uses the well-regarded Cherry MX Blue key switches that provide a very retro and pleasant typing experience for those who have been using computers since the 70s or 80s. If you don't like an audible click, MX Brown switches are an option.

This version is currently available for US$119 plus shipping (warning: this is a fairly heavy product, so shipping will likely be pricy) via Indiegogo. The full price will be US$229 plus shipping. If you prefer to save a few dollars, a version with Gateron Blue switches is US$99/US$199.

Indiegogo backers also receive a soft nylon cleaning brush to remove dust from the keyboard (the glossy black finish plus backlighting makes any debris quite apparent) and a keycap puller – though it's not difficult to remove the keycaps, as we discovered when we had to swap the + and – keys that had been reversed at the factory. 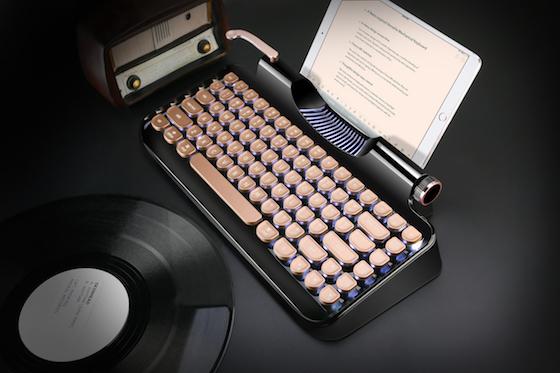 As much as we liked the Rymek, it does have some drawbacks.

That retro styling means the keyboard is much thicker than we've become accustomed to, and depending on exactly where you measure the keys are around 15mm higher than our usual keyboard. That might not sound a lot, but in our case getting comfortable meant raising the chair to a point where our legs only just fit under the desk. KnewKey is considering a slimmer design for a follow-up model.

We often — well, often enough to be annoying — accidentally hit the Caps Lock key when going for Shift or A, possibly because our usual keyboard leaves some extra space around Caps Lock while the Rymek's is spaced the same as all the other keys.

In Bluetooth mode, the keyboard fell asleep too quickly. When that happens, the next few keystrokes were lost while it woke up and reconnected with the computer. The desire to conserve power is understandable, but we found it so annoying that we used USB mode wherever possible. Consequently, all we can say about battery life is that one charge seems to be good for at least two days.

According to KnewKey, production units will wait for 10 minutes before sleeping, which should overcome the worst of the reconnection issue, although we haven't encountered anything similar with other wireless keyboards. The backlights switch off after two minutes idling, which seems a reasonable power saving measure.

The special keys in the spacebar row have Mac-style legends: Ctrl, Alt/Option, Cmd, Space, Cmd, and Fn. Windows users (who are more familiar with something like Ctrl, Start, Alt, Space, Alt, Start, Menu, Crtl) will just have to adapt. We successfully used the keyboard with a MacBook, an iPhone, a Samsung tablet and a Windows system. The pairing process wasn't 100% smooth on every occasion — which isn't particularly unusual — but after pairing, switching from one device to another was quick and trouble free.

In our experience, cheap keyboards are a false economy unless they are only for occasional use. Keyboards with Cherry switches aren't cheap, but the Rymek's regular price converts to around A$310 before shipping, which puts it among the most expensive keyboards on the local market.

Most keyboards at the high end of the price range are aimed at gamers, but this isn't the only typewriter-inspired model: the USB-only Azio MK Retro sells for around A$250 to A$270. The Rymek is more versatile thanks to its Bluetooth interface and phone/tablet rest, and its overall effect is classic rather than steampunk.

Unless you can get in at the early bird price (there were only 18 units with Cherry switches remaining at the time of writing), we feel the Rymek keyboard falls into the self-indulgence category. But if you have the money and it gives you pleasure, what's wrong with that?

More in this category: « Review: 3Sixt Studio True Wireless Earbuds Book review: The Five Anchors of Cyber Resilience by Phillimon Zongo »
Share News tips for the iTWire Journalists? Your tip will be anonymous