This is your Destiny 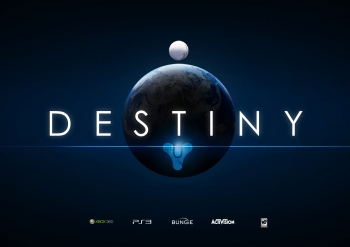 This past weekend we sat in alpha testing for Bungie’s, creators of the Halo franchise, new offering Destiny.  Finally, with some hands on we can get an understanding of exactly what this blockbuster game entails as we explored the Destiny Alpha.

At first glance there is a lot of Halo in Destiny.  Bungie is bringing a design ethos and legacy to Destiny but this is in no way a negative comment.

We downloaded the 6+ GB of the alpha code onto our PS4 and fired up the game – the new power of this next-gen console is certainly being utilised, particularly in the outdoor environments as the detailed landscape disappears towards the horizon and up into a colourful  cloud-filled sky.

The wind blows gently against a discarded piece of fabric, and the bones of long-dead passenger jets lay half submerged in the sands of this forsaken land. 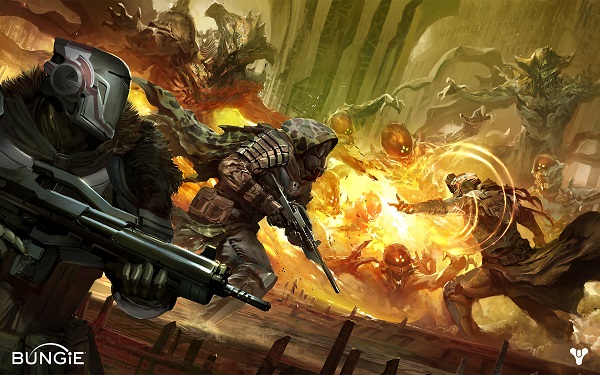 Head inside the gigantic rusted building hulks and we are greeted with diffused lighting, particle effects and on overwhelming feeling of gloom and foreboding.

However we are not alone, Peter Dinklage, Game Of Throne’s Tyrion Lannister voices your companion Ghost, a hovering cube that can open doors and generally give directions and commentary as required.  It is a great mood setter.

Destiny seamlessly mixes play modes enabling you to play the missions on hand solo, join other groups (known as Fireteams) or form your own Fireteam of friends and venture forth – it feels like an MMO raid at this point.

You choose from one of three races, all humanoid in nature and one of three classes, Hunters use long range weaponry, Titans are the tanks and Warlocks wield sci-fi magic.  We chose to be a Warlock, teamed up with a fellow Warlock and a friendly Hunter and ventured forth.

Now we are playing Halo, well, that is a bit unfair, but there is a lot of Halo DNA in Destiny, the guns feel very similar, both in the firing of, and the impact and look of incoming fire.  The weaponry however has some new twists, including most obviously elemental damage.

The enemy AI also – for the most part – is very Halo like with armed foes leaping sideways into cover and occasionally attempting flanking manoeuvres.  Then there is the Hive (ie, the Flood from Halo) that are mindless creatures that barrel terrifyingly headlong into your guns as well as some very MMOesque style boss creatures that take some serious teamwork (reviving the fallen, providing cover fire or distraction) to bring down.

My Warlock can hold her own in a firefight, her combo of firepower and arcane wardings and manoeuvrability.  She can also summon (!) a hoverbike to speed over the landscape, however unlike the Banshees and other similar vehicles from Halo, this one doesn’t pack any punch.

Alongside the Strike raid missions, Destiny players can enter the Crucible for a bit of Player Versus Player action, with a control-the-hardpoints mode.  Unfortunately, being in Australia and playing a so-called Alpha version of the code meant that finding opponents in the Crucible arena was nigh impossible.

Loot management is straight forward; your character can carry a great deal, and instantly compare and break down unwanted items of armour or weaponry into Glimmer, the in-game currency. 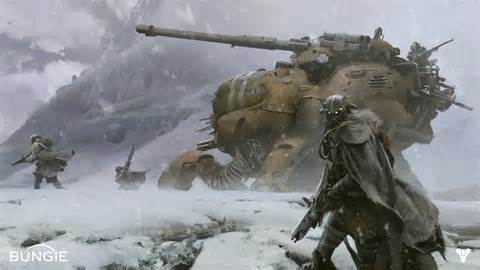 Finally, we head to the Tower, a social hub that is reminiscent of the Mass Effect floating city The Citadel.    The Tower houses locations to get bounties (special challenges to be aimed for in both Crucible and Strike mission events), other notable mission givers as well as merchants trading loot or other services.

This was supposedly an Alpha code weekend, designed to test the game prior to its release later this year.  But who is Bungie trying to kid, this version of Destiny, whilst obviously missing a lot of content, felt like a finished product.  There were a couple of glitches that we noticed such as insta-warping enemies and some slightly dodgy AI, but overall this feels polished and ready for market.

It will be interesting to see how the game performs on the previous generation of consoles.  But if you own a PS4, Xbox One or spanking specced PC, Destiny looks like it might be a must-have, hopefully that is not an early call.

More in this category: « Hands on first impressions: inFamous: Second Son Interview: The Sims 4 – an ideal world that we should all be aspiring to »
Share News tips for the iTWire Journalists? Your tip will be anonymous