The first voyages on the Sea of Thieves 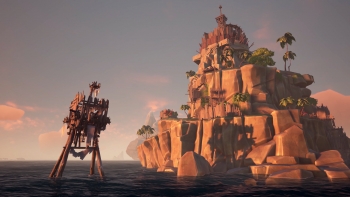 Here be the journals of a fledgling pirate finding a way through dangerous foe-ridden waters to seek glory and wealth for the crew.

Ah! Rare, what glorious environments you build.  Banjo-Kazooie, Perfect Dark, Golden Eye, Grabbed By The Ghoulies, Viva Piñata and many more delights they have given the gaming world, and now Sea of Thieves.

It is ambitious, it has had its shaky launch moments along with it’s ambition, but even these glitches are fun if you can bring along a few crew members for the voyage.

That is the key with Sea of Thieves on the Microsoft gaming platforms (PC and Xbox can play together) –  bring some mates. A bit like launching a raid in World of Warcraft or dropping in with a group in Destiny, Sea of Thieves is best played whilst enjoying your time with friends.

It took us some time to get First Mate Marty, Seaman Simon, Cabin-boy Chris and the ships cat, myself on board a Galleon, but once we are at sea there is fun to be had.

Sea of Thieves wants to make a massive multiplayer game as accessible as possible.  As Joe Neate, executive producer on the game from Rare Studios, describes; “It seems only yesterday we began work on “Sea of Thieves” (or Athena as it was known back then). We set out with a vision to make a multiplayer game that broke down barriers between players, that encouraged players to be co-operative, to bond together, and to embrace the positivity of social interaction.

“We felt there was space for a shared world game that lowered the barrier to entry, that celebrated players’ creativity and that made people smile and laugh whenever they played it. A game where the focus was on having a fun time, above all else. Where the emergent design led to every adventure being different, and the stories players would have become so memorable they’d want to share them, whether that’s chatting about it with friends, posting on forums, writing articles, or sharing screenshots and videos.”

And the game has potential.

Largely the game loop is pretty simple, and progression beyond pretty things (clothes, weapons, boats and so on) to buy, is non-existent, unless you count the Voyages and exploration.

Voyages are jobs or quests you get from the denizens of various outpost islands on the map. There are three forms; Treasure seeking (looking for chests), Soul gathering (combat with prominent undead former pirate captains) and Merchant services (Capturing chickens or getting other items for sale within a set time limit).

Once your crew has a quest it is time to get to sea.

The game gives you some fun tools, Boats are easy to sail:  Pull up the anchor, set the sail length and position relative to the wind, and steer. It is possible to sail by yourself, but being part of a crew (4 on a Galleon, 2 on a fast and nimble Sloop) is a big part of the games joy.

For example, our crew voted on a Voyage to take, checked the map table and worked out where we needed to head. I did the Map and spyglass duties, First Mate Marty raised the anchor and trimmed the sales, Seaman Simon too to the helm leaving Cabin Boy Chris to load the cannons, and then play the hand accordion while the crew danced.

Visually Rare manage to capture their exaggerated cartoon style upon some of the best high-sea water effects seen in a game.  It is a fun environment to be part of.

On our test Xbox One (original, not X model) there is some significant pop-in of graphics when trying to observe an island through a spy-glass, often the chickens you are looking to spy are the last thing for the game to pop onscreen, which is disappointing to those crews on a hunt.

Then there are other players. Largely, crewing up with “randoms” works fine, and there are plenty of in game emotes that can be used if you don’t want to use in-game chat to get messages across.

Then there are marauding crews of braggarts and buggas that just want to steal your loot after sinking your ship.  Normally that would be annoying, but in Sea of Thieves, it not only is in the game’s title, but also part of the oeuvre.

First impressions of Sea Of Thieves are good, There is not a great deal of depth apparent on first glance, however there are also plenty of depths to explore, and assumingly content to be unlocked as reputation and time builds.

See you on the ocean.

Having failed to grow up Bantick continues to pursue his childish passions for creative writing, interactive entertainment and showing-off through adulthood. In 1994 Bantick began doing radio at Melbourne’s 102.7 3RRRFM, in 1997 transferring to become a core member of the technology show Byte Into It. In 2003 he wrote briefly for The Age newspaper’s Green Guide, providing video game reviews. In 2004 Bantick wrote the news section of PC GameZone magazine. Since 2006 Bantick has provided gaming and tech lifestyle stories for iTWire.com, including interviews and opinion in the RadioactivIT section.

More in this category: « Australian games industry desperate for funding air How to survive the Zombie Apocalypse? Hang out in Melbourne. »
Share News tips for the iTWire Journalists? Your tip will be anonymous