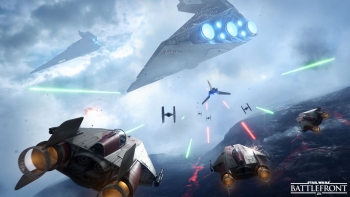 At PaxAus 2015 we had a chance to begin a Tie Fighter versus X-Wing dog fight in a game of ten versus ten Star Wars: Battlefront fun with Fighter Squadron.

The Frostbite engine looks a treat, but having played through the Star Wars: Battlefront beta test last month, apart from the “Hoth” level, it feels a bit weird battling away as a Stormtrooper or for that matter as a rebel capturing and holding escape pods falling from the sky.

But in the Fighter Squadron gameplay of pew-pew laser bolts zipping through the air against a backdrop of a gigantic horizon filling Star Destroyer, things feel a lot more authentic.

In a special press event offsite from Pax the Star Wars Battlefront bus lobbed us into a PS4 enabled LAN where ten goodly folk took control of Rebel X-Wing ships whilst a more sinister looking group crammed their frames into the circular compartment of a Tie Fighter.

The default third-person view was not to my liking although (as in racing games) it does provide the most peripheral vision and least nausea inducement.  Despite this, moving to cockpit view felt, as one would expect, more immersive.

Staring out of the port hole of my Tie Fighter, there is a pang of disappointment that there are no nobs to twist.  Instead controls are typical (albeit Physics Teacher-enraging) flight stick flying.

After the opening cinematic, it is off to the fray just above the lava-blasted surface of some important space rock.

Battlefront throws in some AI craft on both sides to add to the chaos of a dog fight, so even though it is very plainly evident the differences between human and CPU pilots, just having extra population in the cloudy skies was welcome.

Both fighters are well matched at the basic level, soft lock on an enemy works the same way, enabling the pilot to launch a missile once full lock is gained.

Both fighters have evasive manoeuvres that can be pulled quickly, usually a barrel roll to drop a missile lock.

Where they differ is in the special ability available at the starting level.  The X-Wing comes equipped with a temporary shield, whilst the Tie Fighter gets the much more useful velocity boost, although, that shield does come in handy during the all too often mid-air collisions.

The map we were playing featured periodic launches of either the imperial shuttle or a rebel supply ship.  At these times team points were garnered by either protecting or destroying the targets.

The action is fast and vicious, with a good streak of kills feeling satisfying given the frenetic and over-stimulating game-play.

We managed to level up a number of times, but never got the chance to experience the Millennium Falcon nor Slave One upgrades that other players had a chance to try.   It is however surprisingly satisfying pouring laser bolt death into the Falcon as a combined squadron.

Fighter Squadron will be something every Star Wars:Battlefront player tries out, there was not a great deal of evolution in the hour and a half we had with the mode, but for that time frame it was certainly good StarWarsy fun.