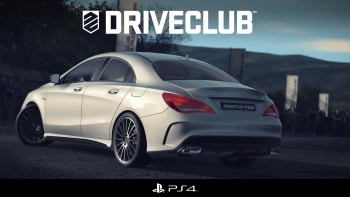 The PS4 exclusive Driveclub looks an absolute treat, sunlight plays off the dashboard and car body as well as the track surrounds in a thoroughly authentic way.  Some of the early single player events take place at dusk, with motes of light mixing with blossom kicked up off the road and smoke haze diffusing the setting sun.

As the sun retreats below the horizon, flares and road lamps illuminate the mountain rush track as cars vie for position with the finish line looming.

Driveclub has come a long way from what was to be a PlayStation 4 launch title in November last year to the game it is today.  We have had some time with the game, and have also spoken to Simon Barlow the games lead developer from Evolution Studios.

Evolution is responsible for the PlayStation exclusive Motorstorm series of crazy racing games.  Driveclub however proved to be difficult to get out the door.

“We had a game at launch, we could have shipped, it would have probably sold quite well, and reviewed quite well,” Barlow explains “but are vision was pretty ambitious, and it felt to us it wasn’t doing that justice.”

Essentially the team was happy with the core racing game play of Driveclub but no so with the surrounding social framework.  And it is this “club” aspect of the title that gives Driveclub its identity.

However let’s cover off the “Drive” aspects first:

“These are probably the most detailed cars in the industry right now” says Barlow as each takes seven months to create.  Each vehicle is built based on manufacturers CAD data, as well as real road tests.

“We have built this engine for the life-span of the PS4, so not just DriveClub but for games to follow”

{loadposition mike08 “It’s one thing to capture the physics of a car,” says Barlow “if you have the CAD data then you can do that.  However, we wanted to take that further and do what not many games do and capture the feel and the personality of these cars.  We are car enthusiasts, we have been doing this a long time, we love cars and racing and we wanted to recreate that emotional connection with these vehicles.”

“We’ve pitched it somewhere between arcade and sim,” explains Barlow “it is dangerous to do that because sometimes you try to hit both targets and miss all.  It has to be accessible, it has to be pick-up-and-play, but it also has to have depth because if you are trying to build a community and it has a shallow handling model then nobody will stick around.”

Driving through the hot-hatch tour events it is evident this game is certainly edging more on the arcade side.  There are no difficulty settings, no driving assists, but in the racing events you can – if you want – bump and crash your way to victory.  You will however pay for that in lost Fame - the in-game experience currency used for unlocking new cars and paint jobs amongst other things.

“You can’t simulate everything in a game, even if you get the mathematics correct for a one to one physics model, you cannot simulate peripheral vision, nor G-forces, nor that feeling through the bum that the car is on the edge of cohesion.” says Barlow.

As such the game consist of excellent visuals, including individually modelled cockpits, great audio and ultimately fun racing in a package that delivers in a package that is different to most on the market today.

Most games are shooting for even more “realism”, and it takes some time to get used to the lack of driving assist options, tuning customisation and a damage model that goes beyond the procedurally generated cosmetic-only effects.

“This engine has a full material database,” says Barlow “when we look at a material we know its density, how it reflects light, all the material data is there”

Damage will happen in layers.  Materials will damage as they would in real life, metal bends, carbon fibre fractures and glass smashes at the point of impact.

“There is no mechanical damage, like you can’t pop a tire or lose a gear, and there is no hinged damage like a flappy door or similar” says Barlow.

The Artificial Intelligence opponents are reasonably challenging.  Evolution has tried to avoid the AI being a procession by staying on the driving line.  There has been an induction of personality as much as possible meaning each AI driver may draft, cut in across the driving line and make mistakes, this adds greatly to the games immersion.

Thankfully, as is the case in many games, there is no rubber-banding (where the AI speeds up or slows down depending on where the human player is) here.

The game features atmospheric conditions based on actual altitude and longitude latitude, day of the year designations.  Barlow laughs; “Even down to the star-field that would be accurate for that location.  Yep, we are completely insane”

The game also features a lighting model that features a light quality effect based on the geo-location atmospheric engine.  Given the right location (ie. Norway) and conditions it is even possible to witness an Aurora Borealis


With an extra year to develop the game the studio has been able to advance features on the development road map.  Before the end of the year expect weather to be a free download.

“We had a whole art team that has had a whole extra year to work, which is why we started to look at weather” says Barlow

{loadposition mike08Rain for instance will be volumetrically modelled as Barlow explains: “Water levels will rise if you watch it for long enough, park next to a river and that river will rise”

“In Scotland it will rain, but take that to Norway and turn on the precipitation modelling on and it will snow, snow will build up, fall down the mountains correctly”

Now the “club” part of the game as we said earlier certainly sets this title apart.  Everyone will want to form or be part of a club.

“They are deliberately small, this is not like a guild or a clan,” says Barlow “it’s six people, last year it was twelve, originally we designed clubs more like guilds, thirty or forty players.  We have refined it, six feels about right, the idea is that it is you and five of your close friends.  This way everybody feels part of the club, rather than a cog in the machine.”

The idea is to be as inclusive as possible.  You might be more interested in Drifting events rather than Racing, you can favour these events, earn Fame and contribute to the club in that way.

Specific cars will only be unlocked within a club.

Each club will be identified by club badge, club paint job, and earned club accolades that can go on the side of your car like WW II plane kill markings.

Online game-play breaks down broadly into asynchronous and synchronous styles.

Synchronous is what you expect, twelve cars on a track and away you go.  “we have made changes to matchmaking however “ Barlow explains “It’s not like a first person shooter where you can jump into a playlist at any point, even if there are only a couple of minutes left you can jump in and make a few kills, take an objective, feel part of the game.”

Racing has a start and a finish “You have to be there at the start, and what we found was in our own titles, everybody waits around, waits for the start, then a few people drop out, and you end up with three or four people that finish the race.  Then you wait for three or four minutes to start something else.”

When you go online you can see a series of upcoming events which you can sign up to.  You can see what the event is, who has signed up already including friends.  The game helps here, matching up friends, clubs and registered events.

Barlow is proud of this dynamic system, it was after all the code that caused the major delay in shipping the game; “The match slots themselves will dynamically change depending on what is popular, and who has signed up for which events.”  The server will adjust the period between popular events, and combine groups as needed to give players a “fuller” experience.

Barlow explains the Challenge system, the heart of Driveclub asynchronous game-play.  “I pick this track, this car, this time of day, weather conditions (once we release the weather update) and this is the time and the score that I set.  This I send to everybody on my friends list and beyond, with say, three days to beat it.”

In practice it works fluidly.  Players can attempt to beat the challenge for the timeframe allowed, once expired the Fame points are distributed according to the challenge leaderboard.  The more people that take part, the more Fame is awarded.  There are individual Challenges and Club Challenges.

Driveclub is exclusively available on the PlayStation 4 game system.

More in this category: « Hands on: Borderlands: The Pre-sequel PAXAUS 2014: Never Alone – fusing ancient and modern culture »
Share News tips for the iTWire Journalists? Your tip will be anonymous