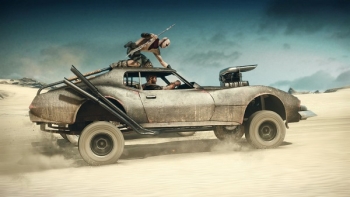 If you grew up through the 70’s and 80’s in Australia the Mad Max franchise of movies became Iconic, now with a new movie in the making and new game technology on the horizon Avalanche Studios are bringing an open-world style video-game to the market where you can play as Max Rockatansky himself, roaming the Wasteland in the endless violent conflict of survival.

We sat down with Emil Kraftling Senior Game Designer to talk through and have a peek at the game as it heads towards its 2014 release date.

Mad Max the video game is not tied to any time-line point in the franchise, nor is it associated with the new film production also targeted for 2014.  Instead the team is giving Max a whole new storyline of adventures and relationships in the Wasteland.

First the bad news, early in the game the beloved XB Falcon Interceptor is lost.  However, Max teams up with a mechanic savant (a Blackfinger) known as Chumbucket.  Chumbucket works with Max to gather enough salvage to build the Magnum Opus, a vehicle that will remain with Max for the rest of his campaign.

And vehicles are the main focus in the games narrative: “The way you move forward in the narrative you need to complete missions, to move through this world you need your car,” says Kraftling

“So it all revolves around building the car, that could be very concrete things like you need this upgrade on this car in order to get into this new area or it could be you need this weapon on this car to handle this segment of this mission.  So it will certainly be throughout the narrative, if you only play the main missions you will still have an upgraded car, but obviously if you explore the world, do all the side missions and random encounters you will be able to get a beefer car sooner.”

The Magnum Opus can have a great deal of customisation bestowed upon it at a friendly stronghold garage.  Depending on what Max and Chumbucket have scavenged from the Wasteland, players will be able to add armour, rams, weaponry, paint jobs (because how one looks out there in the radioactive waste is still important), engines, suspension, tyres (including bladed rubber) and more to their chosen metal mount.

We saw a broad expanse of wasteland during the presentation, but disappointingly the desert lacked that Australian red hue.  Later we were told that this was a dried sea-bed region, and so we forgave the developer.

This did prompt the question about geography, Avalanche are cagy on stating that the game is set in Australia.  Nor are they forthcoming with details about how different areas of this open-world game will be locked off during the early game.

“Normally we stay clear of doing too much of that, gaming the player, like certain games do [often], where they open the world up sequentially, you get to see more and more of it” explains Kraftling  “We are very fond of letting the player loose with as much as possible, as soon as possible.  But there is one major ‘gate’ in the game that opens up a new area, but it is very contextualised, it is a very large, but natural barrier and it is also fairly early in the game, as soon as we can we open as much as possible.”

Let’s face it, much of the attraction of a Mad Max game will be the theme itself.  The movies are iconic in Aussie lore, how does a development team based in Sweden tap into this canon?

“Obviously we have watched [the movies] lot,” confesses Kraftling “Most of us watched them a lot before started making the game.  We love the franchise, and what we are trying to do is capture ‘what is this world?’  This version of the Wasteland, how can we make that feel authentic?  Have people feel like they are autonomous in this world and can explore it.  Obviously there is a lot of inspiration from the movies and from what George Miller has set-up for the Wasteland.  While we are not specifically tied to any one of the movies, they are the groundwork for a lot in the game.”

The Wasteland would not be much fun without things to do.  Will we get to craft our own razer-sharp boomerang? Or perhaps venture out in an autogyro looking for snake-bombs?  Mission design will be paramount to the enjoyment of the game, there are only so many ‘fetch items’ and escort missions one can endure in an open-world style game.

“We want to make your every action in the world be rewarded, game-play rewarded, so we give you stuff for whatever you do.  But also we wanted to contextualise this, to tie it to the lore, so it is just not ‘gather ten pelts’ but instead you are doing things that seem real to the people of this world.”

Back to vehicles in the game, the demo Avalanche Studios had for us showed a wide variety of hastily constructed post-apocalyptic cars.  Most are sedans with armour plating , but a few sport some fancy weapons including a harpoon that can be creatively used and a flame-thrower for spectacular stopping power.

“Going into the game we decided very early on,” says Kraftling “Cars, and car combat as well as vehicle scenarios are a big part of it, so let’s do it entirely physics based , it should feel real, it should look real, like what you would expect to see, obviously real in the sense of Hollywood physics rather than real physics.  So we set up a system that is entirely physics based which comes across in everything.”

How will vehicles differ from each other, will we see for example front wheel drive and rear wheel drive vehicles?  “Yeah, those kinds of differences we have” confirms Kraftling  “cars consume fuel, and they consume different amounts of fuel depending on how much the car weighs, or how you handle the throttle, its really what you would expect.  And that has affected how we approached the game, in other games, driving different cars is mostly about, well they look different and they have a different speed, but there is so much more game-play tied to vehicles in our game where you have the ramming, the harpooning you have the boarders, you have all of that where it is really important that you tell the difference from one car to another and that is not just how it looks or how fast it goes.”

“It’s all physics, all those dimensions come into play when hyou drive, how the cars handle? How they crumple?  It’s a huge step up from Just Cause 2 [Avalanche Studios previously well received release].  We did have driving in Just Cause 2, which was also physics based, but we have done some really extensive work going into this game bringing it to the next level, we have added some new talent to the team.”

We saw some good examples of how this will work in game, relying on a V12 to power out of an overwhelming situation, or weight, armour and gun-power to go on the offensive to take out stronghold bandits.  The damage modelling was on show, which Kraftling confirmed:  “There will be, depending on the car construction, where the bumpers are and so on, there will be more or less damage.  The angle of attack say where one car rams another will determine the damage.”

Apparently both the outside of the car and the occupants will have damage inflicted.  This led us to ask about other weaponry that could be mounted on our cars, but at this point Avalanche is being coy:  “There will be opportunities to add further weapons to cars” was the only response we got.

More in this category: « The Grand Autos of Grand Theft Auto V VI Reasons you have been playing GTA V too much »
Share News tips for the iTWire Journalists? Your tip will be anonymous