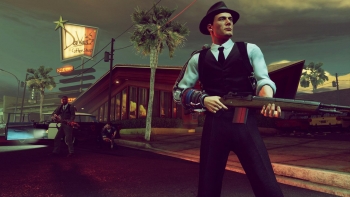 [UPDATE] Added the latest mysterious trailer for XCOM: The Bureau.  We get to understand more about the mysterious Bureau, the forerunner to XCOM, that infamous organisation that protects us from Alien threats.

We first got some hands on time with XCOM: The Bureau back in May, this gave us an inkling of how the game was coming together from its troubled inception.

This week we had a chance to play through the first few hours of the game due for release on August 23rd.

A quick overview, unlike XCOM: Enemy Unknown, the highly acclaimed turn based strategy game from last year, The Bureau has a more action orientation.  Third person action that is, however, as we found out through extended game-play, strategy is still very important.

Strategists, raised on the traditional XCOM branded game-play will be happy to know it is indeed possible to play through many of the alien battles without firing a shot!

How so?  We the key is with the order system.  You play as Agent Carter, a G-Man of the highest integrity (with only a hint of regret for his devotion to his job at the expensive of family).  Charged with bringing a mysterious suitcase to his superiors, he is surprisingly open with his orders when called upon, and accosted before he can even leave his apartment.

Awaking to find the gunshot wound he received in the fracas fully healed, Agent Carter head back to base to try and unravel what just happened, and, of course, to fulfil his duty.  In the process Agent Carter will recruit some squaddies who can be given directions whilst time is slowed down during fire fights.

Each squaddie has their own ‘wheel’ of applicable orders depending on their expertise as an engineer or soldier and so forth.  Orders can be stacked, endlessly.  So an engineer for example can be told to move to a flank, deploy a turret, move back into cover and highlight a target alien.

The idea is great; the execution takes a little getting used to in the heat of battle.  Even in slow-mo there is pressure to target attacks, and this can be a little clunky to achieve initially.

The look and feel of the game remains very themed.  The game looks like a 60’s television show, except in colour.  This can initially come across as bland, with textures, whilst not ‘flat’ are certainly devoid of details.

The character models are also built to enhance the art direction; this is more like thumbing through a comic book than observing a movie.  The game now features dialogue trees, Agent Carter brings his Clint Eastwood/Dirty Harry voice to the story, and occasionally squaddies will throw in quips between the action.

“This is just like something out of a Captain Thunderclap serial” says on, whilst another states “It’s going to take more than a hole in the ground to beat those things” as the helicopter lands at The Bureau’s underground bunker entrance.

In our play through there were some rough edges and inconstancies.  But for any XCOM fan looking for something slightly different to the usual isometric turn-based game-play these slight flaws may be overlooked and lost amongst the joy of the actual play.

More in this category: « What is Facebook for? Game Preview: Automation »
Share News tips for the iTWire Journalists? Your tip will be anonymous