PlayStation Vita developer: like a PS3 in your pocket

RadioactiveIT sat down with John McLaughlin producer at sony's XDev studios on his Australian whistle stop tour recently to discuss his work on the upcoming PlayStation Vita.  McLaughlin talked up the power and features of the device, but like all good all developers he wants even more grunt.

John McLaughlin is a producer at Sony XDev studios in Liverpool in the UK, the studios have been a central hub of activity working on titles such as Little Big Planet, The Buzz quiz series, KillZone, MotorStorm to name a few Sony exclusives. 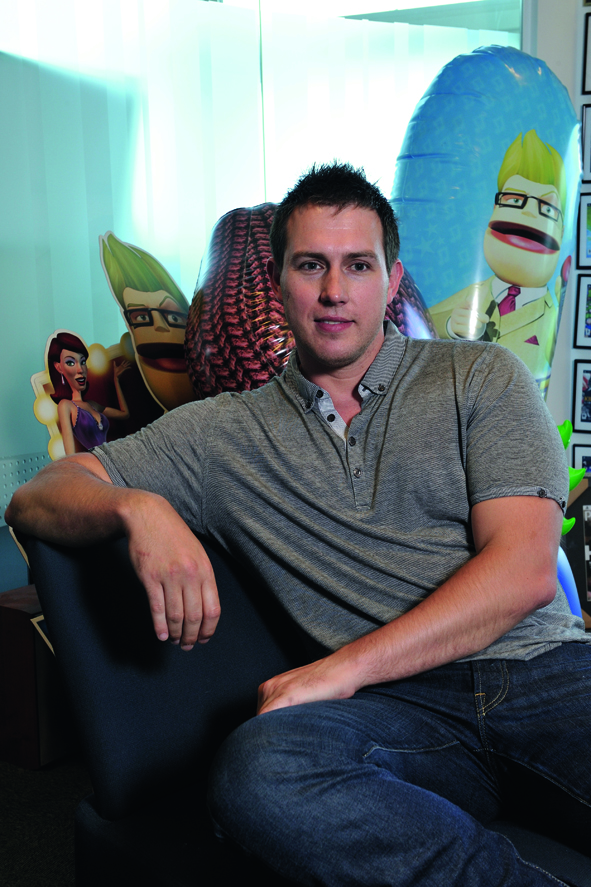 But for Mclaughlin the focus is now on the handheld PlayStation Vita with two games highlighted, a new Little Big Planet and Reality Fighters a new augmented reality game.  McLaughlin's team is also bringing fresh versions of PSN (PlayStation Network) titles such as Super Stardust and Hustle Kings to the new portable platform.

'[We are] giving them a fresh look and taking advantage of the new Vita features, whether it is the online functionality, the rear or front touch interface as well' says McLaughlin.  The Vita itself will release in Japan this year, and hits the rest of the world early in 2012, so McLaughlin has a bit of time up his sleeve.

How would a new LBP take advantage of the new hardware?  'When we first heard about the hardware, ' says McLaughlin ' we talked about how easy it would be to bring LBP across to the same quality as a PS3.  But once we got the dev kits and we started playing around, we realised we could change the game-play quite a lot, yet it would still feel like LBP.'

'The great thing about it is that on PS3 we have five million user created levels, and they have created some weird and whacky stuff that we never imagined you would be able to do, but now with the touch interface it is easier to create a level than ever before.  So we expect people to knock levels together quickly, knock levels together that are much more innovative, whether it is a front touch game, a rear touch game, games using the camera or games using a combination of features.'

Will there be any cross over from LBP on the PS3 to the new Vita version?  'All the levels in LBP will be fresh for Vita, however if you purchased the Captain Jack Sparrow costume in LBP on the PS3, all your costumes will be available in LBP on the Vita.  Other titles that utilise the PlayStation cross platform compatibility are Hustle Kings and WipeOut you can actually have cross play with the PS3, you can play directly against your PS3 counterpart, whether you are racing or playing Pool, different games will take advantage of that in different ways,' says MclLughlin.

McLaughlin is keen to talk up how other feature of the Vita will be applied to new games.  'With Reality Fighters ' explains McLaughlin ' rather than you playing as a typical beat-em-up character, we can now scan your face and put you in the game, making you the character.  You can be you, or you can be anybody you want to be.  You can take photos of the real world or in game and the download to a social network site to share with family and friends. So we are really big on that right now, ' McLaughlin also outlined ways games could use geolocation as part of the play, letting players leave gifts for other people in their local and more, though nothing here is beyond what we have seen with smaller iOS based  augmented reality games.

The PSP has sold over 70 million units world-wide and  Sony hope to continue this success; 'we have learned a lot from the PSP ' explains McLaughlin ' and the Vita is a natural evolution of this, whether it is the twin [analogue] sticks for First Person Shooters or third person RPGs, or the multitouch screen to create games people have been used to on the smartphones, and now we have added this rear touch multitouch pad and that adds a new dimension.  SuperStardust has a new mode where you get to crush asteroids by pinching on the rear and front touch so you can use them in conjunction with each other.'

McLaughlin is quick to point out the freedom for developers that he sees with the new hand-held:  'I think all these features together just make Vita a highly desirable piece of kit.  As a developer we are really excited because it can do almost anything, you have graphical power that is fantastic for a portable device, you've got the user interface inputs that give a lot of scope to do different things and then you've got the online side of things so we can be brilliantly innovative with the different types of game-play whether it is online or location based game-play.'

The Vita screen is not being done justice through online videos says McLaughlin 'It's 5', it'sOLED, it's multi-touch, it looks stunning, I mentioned Hustle Kings before, that game is 1080p 60 frames a second on the PlayStation and it is replicated perfectly, it looks absolutely stunning on the OLED screen.  Games such as Little Big Planet, Uncharted, WipeOut look beautiful, you really do need to see it in action.'

Battery life expectations has not been announced for the Vita, neither has pricing in many regions of the world, though the US$250 mark that has been announced is looking great value for the hardware involved.

Currently there are no games ready for the Vita launch that might exploit co-op PS3 and Vita game-play in a similar vein to how Nintendo will push the future Wii U and its new hand-held controller.  But, there is no reason why this could not be the case.

Finally iTWire asked McLaughlin how he enjoyed the under-the-hood power of the new device?  'Yeah, it is pretty easy to get things up and running, but as developers we are always greedy, we always want more, it doesn't matter what we get, we always want more.  We are finding the Vita easy to work with, there is plenty of grunt there, if you have seen Uncharted it is almost on par with the PS3 version, it is essentially like a PS3 in your pocket.  I don't think anybody is going to be disappointed by the graphically capabilities of this machine.'