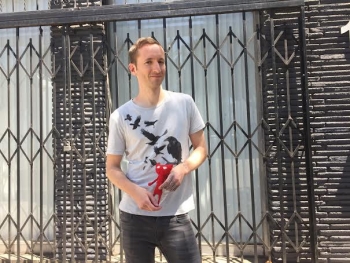 The yet to be released Unravel from independent game studio Coldwood from the north of Sweden is one of those intriguing artistic games that seem to successfully combine the craft of video game construction with the emotional heart of characterisation.  Seemingly so does Coldwood’s Creative Director Martin Sahlin.

Unraval will be published by EA (currently slated for a Q1 release in 2016) and tells of the trials and adventures of Yarnie, a cross between Sackboy from Little Big Planet and Kirby from Kirby’s Epic Yarn.

Except the vibe is very different, there is a different emotional level attached to guiding a character through a familiar, yet, for him, dangerous world as the yarn that makes up his body strings out behind him.  As time goes on Yarnie becomes further emancipated as a player struggles with the puzzles of an Unravel level.

Surprisingly Sahlin has not come across the game Max: The Curse of Brotherhood from last year.  Here there is a similar emotional attachment to the protagonist lost in a 2D physics based platform nightmare. 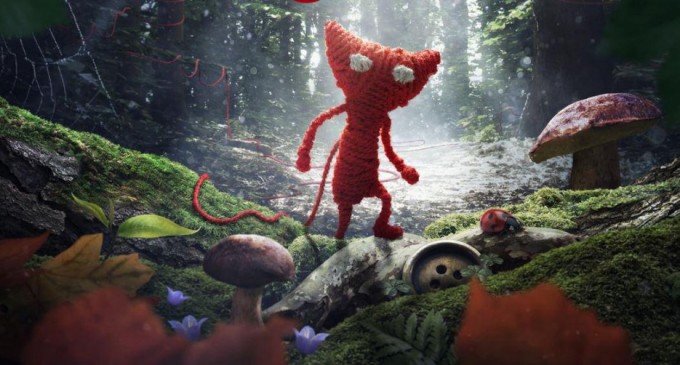 It is a different angle here, and certainly the physicality of the environments is high on the agenda being one of the favourite elements brought by the team at Coldwood to their games.

“The physics parts are a given, I was quoting Gabe Newell [Valve Software] before where he said his theory of fun was that the more ways a game can respond to your interaction, the more fun it is and I totally second that.  I think that’s basically what games should be all about, have them to be these real living things that react to your input,” says Sahlin.

“The more ways we can make them react the better it is.”

Does Sahlin believe if interactions are more akin to the real world physics this opens up the accessibility of the game?

“Yeah, I guess, but also I don’t want the sense that I am playing a movie.  When I am playing a game and something really cool happens, you know, it was meant to happen, and it is going to happen exactly the same way all the time.”

“It’s still a cool moment but, the best moments are the ones you didn’t plan for, when things just happen.”

“We have a lot of the scripted moments as well, but personally I am just a huge fan of a bit of randomness, and a bit of life in games.”

Much of the commentary on Unravel has been around the emotional connection Yarnie exudes to the players, Sahlin is obviously passionate himself about attaching the onscreen action to a number of human levels beyond the physical.

“I have been doing this [making video games] most of my adult life, and there have been frustrations along the way.” Says Sahlin “It is art we are doing after all, so whenever something doesn’t turn out the way you want it to be, it kind of breaks your heart a bit.”

“This time we said, we are going to do it right, from the start, from the heart, because that’s what I feel we have been lacking, we have been making these games that are fun, but they are not about anything, or mean anything.”

“I hate the term ‘time waster’, because a lot of games are time wasters, I hate that it has become a positive term because time is precious, it should be treated as precious and it should not be wasted on something that doesn’t mean anything.”

There is no on screen HUD in this game, nothing that indicates the usual tropes of health or map and so forth, in fact you could be viewing a static painting, something hanging on the wall in a gallery.  Is this kind of video game a step up from the craft of making games to be actual art?

“It sounds a bit arrogant to say a step up,” Sahlin rightly points out “it is more like these two separate tracks, they both need to be good, sometimes people focus on the craft and they forget about the art, I want to do both things.  I don’t necessarily believe that art is better than craft, I think when we have both of them it is kind of nice.”

Coldwoods studio is located in northern Sweden in the city of Umeå.  The development team decided to use locations near Umeå to make up the environments of Unravel.

There is a decidedly northern Sweden feel to the places Yarnie must travel, diverse they are, but there is a linkage theme to them still the same.

We had to ask; what about mosquitoes, are they as annoying in this game as they seem to be for the inhabitants of this region?

“That was the single biggest feedback from the testers during QA for the game, “ jokes Sahlin “’The mosquitoes are really annoying’ they said, yes they are, that’s the point.”


Last year iTWire looked at a game called Never Alone, made in conjunction with the input of the indigenous community in Alaska, that title, like Unraval set out to combine platforming fun with a bit of thought provocation.

Sahlin nods along as we mention Never Alone; “We are not trying to change the world or anything, we are not aiming that high, we just want to make something that is honest and true, from the heart, and trying to reach other people’s hearts as well.”

But does that provide challenges given, at the end of the day there is a product to deliver to the market?

“The game is not in the way of the emotional response, the game is there to enforce the emotional side, every puzzle you overcome is a symbol for the struggles in life,”

“The game is about reaching out, about mending a broken bond and connect with someone, basically when you make your way past something complicated it’s just because it is complicated to reach someone sometimes.”

“If you are into that, if not then it is just a fun game, you don’t have to think about it.  The cool thing is that if you do think about it, it’s actually kind of beautiful, which I really enjoy.”