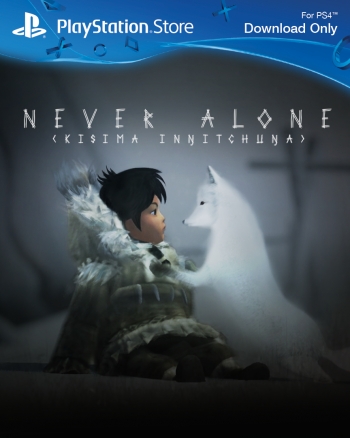 The cultural spread of the indigenous people of the arctic region, specifically in the US state known as Alaska are as many and varied as those found in Australia.  And the issues of modernisation, youth migration attracted to cities and the loss of ancient cultural links are also very similar.

Never Alone (Kisima Innitchuna) has a genesis slightly different from most commercial video game ventures.  It is two major aims, yes one is to indeed generate revenue, the other however is to be the catalyst to increase cultural interest and maintain a link to the past.

For over thirty years the Cook Inlet Tribal Council (CITC) has been providing support for Iñupiaq  youth moving from the rural areas into the more urban and western influenced larger towns.

This has resulted in some issues not to dissimilar from those faced by indigenous populations here in Australia.  Apart from some social peg shape issues, one of the problems is a dilution of indigenous cultural stories and heritage.


At PAXAus 2014 we had a chance to check out Never Alone, a new initiate from the CITC to not only provide a revenue stream beyond government supplements, but also form a new way of relating stories between generations.

“About ten years ago our board of directors said, we are asking our people to be self-sufficient, we also need to be self-sufficient as an organisation.” Says Amy Fredeen CFO of the CITC and also Lead Cultural Advisor on the Never Alone project “We had relied almost solely on government funding which kind of ebbs and flows.”

The CITC organisation attempted to find income from a number of diverse initiatives, “but we found we were not connecting with our youth at all with any of our social enterprises.” Explains Fredeen.

“In the next 10 to 15 years we are going to be seeing a lot more 18 to 21 year olds coming through, so we wanted to find a way to spark their inspiration about themselves and about their way to connect to culture.  But we also wanted to have a good income stream.  We were literally sitting around the table one day, and my boss, Gloria O’Neil (President and CEO of the CITC) said well, why not video games?”

“We have been using stories to transfer knowledge from one generation to the next for eons, and so for us it was really the next logical step” says Fredeen.

“But we didn’t know how to make video games obviously, so [we] were charged with finding the best in the industry, finding a company that had shared values and vision with us, and so we stumbled upon E-line [out of Seattle Washington] and we figured if they are willing to come up to Alaska in the middle of winter, it was probably a conversation we at least start to have with E-Line [laughs]” 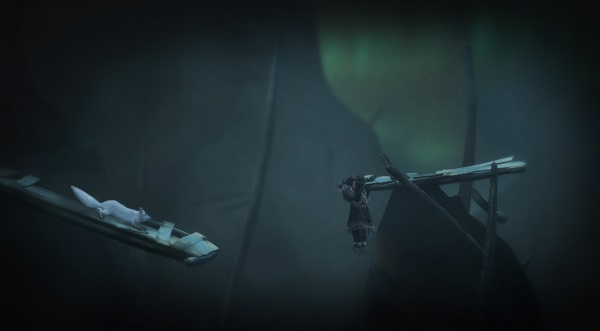 “We wanted this game to be a spark not only for our own youth, but also for the whole world, and we knew we couldn’t do that without it being fun” says Fredeen.

Alan Gershenfeld is the co-founder and President of E-Line games, with a background that includes a long line of classic AAA titles mainly during his six years at Activision.

“When we got the call from the Cook Inlet Tribal Council, and we got to know them, we realised there was a real opportunity here.  Initially we tried to talk them out of starting a video game company, I’ve been around in this industry for a long time, we have seen hundreds, thousands of companies come and go.  But before just jumping into making a game we really studied the space, we looked at how indigenous cultures were represented in other media, in movies, in comics, in music, things like Whale Rider as a movie, world music, every medium seemed to have great examples but video games.”

“Clearly this was something had not been effectively explored”

Never Alone (Kisima Innitchuna) tells the story of a young Iñupiaq girl, Nuna, trudging off into the harsh unknown searching for the source of a fierce blizzard devastating her villiage.

The tale is drawn from actual Iñupiaq myths and is presented in a hauntingly beautiful fashion.  Initially animation setting up the story takes the form of scrimshaw carvings and uses authentic language throughout.

Once players are in the game-world proper, inspiration from games such as Limbo and Journey are evident, and the development team acknowledge these sources.

Using a palette of mostly greys, the game is essentially a side scrolling platform puzzle game, set at a unhurried pace.  This is a gentle game (despite a huge polar bear lumbering after you early on) and in particular the atmosphere is one that will draw you in. 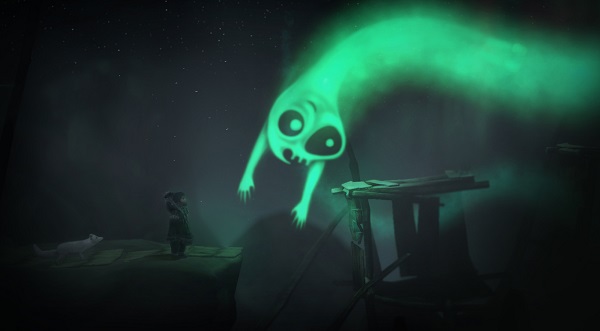 It can be played solo, switching between Nuna and a mysterious white fox that turns up early in the game, in a button switch.  Or preferably co-op with each player controlling a character that must coordinate their efforts in a delightfully engaging way.  This is no chaotic Super Mario Bros, think more like games such as Brothers.

The white fox is more agile and can jump or climb up high ice walls, Nuna has hands (an opposable thumbs) which come in useful at other times.

The pair must traverse the beautiful and hostile terrain, discover the mysterious spirits and most importantly, connect with the players to tell this wonderful tale.

Never Alone features a unique set of unlocks.  Instead of the usual digital rewards of new weapons or garb, players will unlock a series of vignettes that capture the essence of the indigenous people of the Cook Inlet region.  Presented in traditional language by a series of local elders and others, these short documentaries are well worth brainpower expended to solve Nuna’s icy in-game puzzles.

Available on Xbox One, PS4 and Steam from November 18th Never Alone (Kisima Innitchuna) should be one to keep an eye on.

More in this category: « Review & Interview: Driveclub Hands On / Interview – Dragon Age Inquisition »
Share News tips for the iTWire Journalists? Your tip will be anonymous