Keith Guerrette  - Lead Visual Effects Artist at Naughty Dog sat down with us to discuss the upcoming Uncharted 3: Drakes Deception, Guerrette explains a number of challenges the team faced during development, and how Uncharted has helped define a whole new gaming genre  of cinematic adventure.

Naughty dog has been showing off Uncharted 3: Drakes Deception for a short period now, and we started by asking how this new chapter in the continuing story of Nathan Drake is being received?

'It's been interesting ,' says Guerrette 'because it's been a lot of the same things we developed and pushed from Uncharted 2, people are really, really enjoying the fact that we have a strong cinematic presentation running through it, the way we tie the story into the game play back and forth.'

'We don't really remove the player from the action sequences,' says Guerrette 'most games struggle with the challenge of 'we have this really awesome thing we want to show, but we don't know how to do it with game-play', and that has been our biggest focus through the franchise, but with this game in particular we absolutely wanted to make sure the player was in control at all points.   When you are playing I think you will find that the only time you see a cinematic is for dialogue, because the dialogue during game-play is not that exciting, so when we want to show emotion and actually present story then we cut to cinematic, but anytime there is action, we make sure you stay in the game and stay in control.' 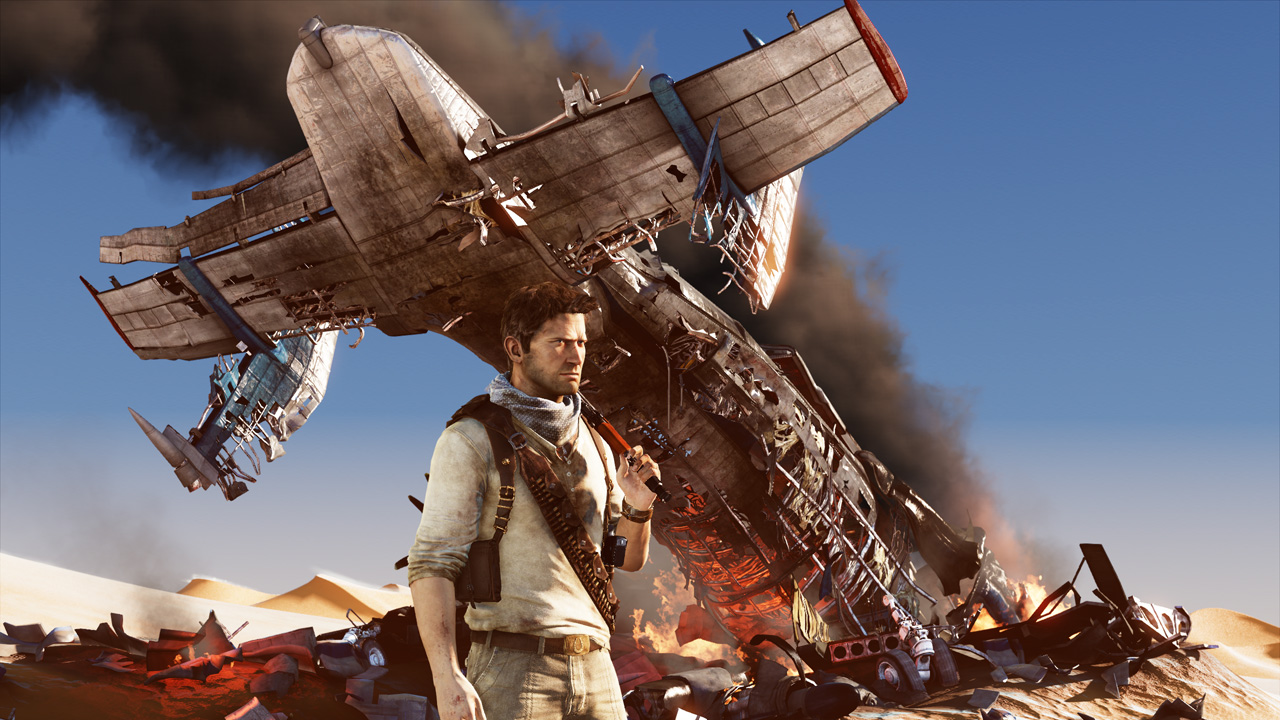 One way other developers have decided to treat those in-game cinematic moments is to use a technique called Quick Time Events.  The player is presented with a sequence of buttons to press in quick succession or within a short time frame as the on screen action plays out.

'Quick time events is something we have really tried hard to stay away from,' explains Guerrette 'in the first game we had a couple, and it was usually because we ran out of time to develop the [scenes] to not have quick time events, but still wanted you to have some sort of interaction.  But really if the player is about to have a rock drop on them, why not have the player actually roll away?  During the production of Uncharted 2 we spent a tremendous amount of energy on the engine side, hiring our programming staff to make sure we had the ability to build the train sequences, and we took almost the entire two years to get those two sequences to work, at the end of production we sat down and realised we had barely scratched the surface of what the technology could do.'

The Uncharted 3 team wanted to go-to- town on contextual animation, so they staffed up and, as Guerrette  points out; 'We rebuilt our entire animation streaming system, so that at any given point when we are trying to present action that would require anything unique we would have the ability to do it and support it.'

One example during play testing that Guerrette cites is the air-strip chase where Drake jumps onto the bonnet of the car tries to jump onto the landing gear, a lot of people during testing actually put down the controller, which was kind of funny as the team had to say to them 'No, no, you are still playing.'

So does the challenge then become not so much the technology, but the script writing for a project such as Uncharted 3?

Guerrette  tends to agree: 'I don't think the technology is our biggest challenge anymore, there is obviously still room for improvement on the technology, we obviously still work within the confines of the PS3, but really it is so wide now, that it is up to us to find the most creative solutions to present story and game play and tie them together, so one of things we have found is that we need to iterate very, very quickly on these tasks because we have no idea whether the will be fun or not.'

'So when we sit down and come up with the concepts for a level , or even a small thing, we have to throw it into the game and see if it works, it inevitable doesn't do what we want, but it allows us to go from there and pick the next move to continue to make it better and better.'

What about any aspects of the game that has not been received so well?  Has the feedback so far been all rosy?

Guerrette  explains how some reviewers have expectations when freshly migrating from another game: 'As we have been working on this genre we have been expanding the genre of cinematic game play, one of the things we always fight is; how do we actually present a very emotional and rich story line, but not make the player feel like they are not in control?  It is a huge challenge for the type of game we decided to make.  We try to solve that by giving a lot of different options for game-play directly with the scenarios we put you in, but every now and then we do run into a reviewer that, you know, they come off a game like Skyrim, the exact polar opposite [development challenge], some reviewers would like us to find solutions to adapt a narrative running through game-play without quite the same linear feel. '

'That's something we are very aware of at Naughty Dog,' Guerrette explains 'and it is a challenge that's been presented to us the entire time,  I think it has actually gotten a lot better over the course of the franchise, but it is one bit of feedback that we always receive and we appreciate it, because we actually agree.'

Gun-play versus exploration has also been an issue raised with past Uncharted  games, is getting the mix right is part of the challenge?

'Absolutely, I think people notice quite a bit the jump between Uncharted 1 and 2, Uncharted 1 was very segmented, there were points where you are climbing here and you are shooting here, and they didn't blend, the pacing was very segregated.  It was one of our focuses in Uncharted 2 to smooth that out.  There is a very big learning curve for us to design levels where the player has the option to traverse during gun-play and the option to shoot during traversal, merging the way we present both scenarios to the player.  With this game, again it has been one huge focal points of making sure the transition between climbing/traversal, stealth, melee and shooting and the action actually has been smooth.  We want to make sure that we are giving the player as many options to pick which route she would prefer to take the entire time, and that is the strength we have to combat the fact that we are presenting a linear progression, to give you the best narrative experience possible.' 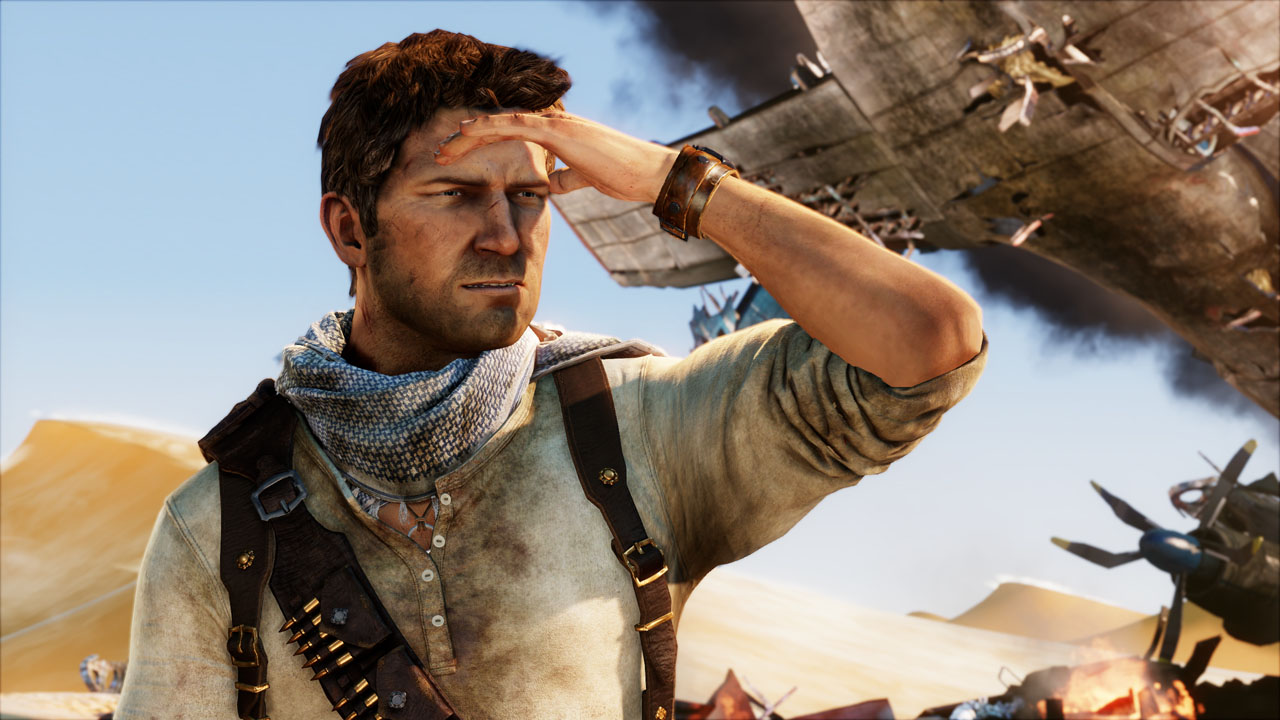 'We had to be very careful about how we train the player to play our game, because we are presenting different things in somewhat unique ways, like the thought of climbing upon these surfaces is unique to our game for players that have come from, uh, a lot of people have played Batman right now, and I am watching a couple of reviewers that have come from Batman, and they go into our game and they struggle.  It is because they are still use to the training received to play the Batman game, and it is kind of cool to see them, when they pick up the game, through them into the middle of some of the review levels and it's interesting to see what they struggle with.  When I sit down and explain to them to look for the light areas,  or even colour composition or geometric shapes, little things that subtly catch a person's eye as they run through levels, watching how people interact with the game is always fascinating, there are a lot of things we can learn from it.'

More in this category: « Hands On: Need For Speed: The Run DICE Creative Director: Battlefield 3 will push boundaries of aging consoles »
Share News tips for the iTWire Journalists? Your tip will be anonymous