Interview: A Reckoning between fantasy RPG and action fighting

Kingdoms of Amalur: Reckoning is a new IP from 38 Studios boldly entering the market strewn with fantasy based RPG's.  But as Lead Designer Ian Frazier and Producer Sean Bean pointed out to RadioactiveIT, there is plenty to distinguish this game from rest, in particular the rich lore and the Tekken style combat.

With games such as The Elder Scrolls V: Skyrim dominating the single player RPG landscape, and not to mention the attraction of other similar AAA RPG titles both single player, multi and massively multiplayer also around, it is a bold path to tread to develop a new IP in this market

'We are pretty bold people,' says Ian Frazier, Lead designer at 38 Studios ' it's something we have wanted to do for a long time, Curt Schilling is the founder of the company [38 Studios] is a long time fantasy RPG fan, and so, from the very beginning, at the funding stage we knew this is what we want to do, no questions.  A huge proportion of the team are rabid fantasy RPG fans.  So it is something that is across the board, from the money level down to individual artists and designers, this absolutely something we wanted to do regardless of what anybody else was doing. '

'Then we are obviously trying many things to differentiate ourselves from all the other games that are in this space, and the big thing is our combat.  Obviously we are bias, but we believe we have not just the best combat in fantasy, but in the RPG genre as a whole.'

Kingdoms of Amalur: Reckoning seems to be taking its cues from everything from Dungeon Siege to the more pure fighting style games such as Street Fighter

Frazier agrees: 'Yep, in terms of the combat experience it does pull a lot from the action game genre, you are right, our combat team lead is in fact a tournament level Tekken player, and a lot of that kinda shows up throughout the design of the combat.  We have juggling of enemies, the concept of framed advantages in there,  you can cancel out of a middle of an attack with a roll or a block, you can be in the middle of an attack and transition to another, you can combo together different weapons seamlessly .  It's all very smooth and very reactive and we spent a tremendous amount of time and effort on our animation, it gives us a sense of weight and heft and power to the moment-to-moment combat than what you would normally see in a RPG.' 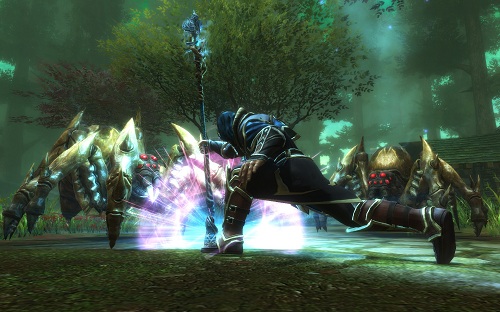 'On the other hand you mentioned Dungeon Siege, it's the loot right?  You take these enemies down you want to get something awesome for it beyond just some XP.  Hardcore RPG's such as Bethesda [Skyrim, Fallout 3] and Bioware [Knights of the Old Republic, Mass Effect] games, they have a lot of strengths, but the things they don't tend to do as well is loot, and we wanted to take a hardcore RPG and inject into it, sort of, loot awesomeness that you get out of more hack-and-slash style of game, like Diablo or Dungeon Siege.'

This is an RPG game, and people will want to know about the games inventory system, and more specifically what kind of sweet loot can be picked up.

'We have a robust loot system that can generate over 2.3 million unique items out of a matrixing system,' says Frazier 'so you can get your Flaming Helm of the Wombat, so all of those things can happen as well as socketing, where you can socket gem stones, make your own gems using one of our crafting systems, and then beyond that there are hundreds of hand crafted unique items, weapons and armour pieces, many which become collectable sets but have their own arc, lore, history and of course stats'

Picking up on lore, what is the background of Reckoning, what  kind of world will people  be exploring?

Shaun Bean, producer at 38 Studios picks up the tale: 'The world of Amalur is actually the brainchild of R.A. Salvatore who has written books in the Forgotten Realms series, and you may be familiar with his Dark Elf work, so when Curt Schilling started 38 Studios, they wanted to create this giant work, and from this world there would be this tome, this history that we could pull from to create multiple products.  So R.A. sat down and wrote 10,000 years of history, all of the races, the culture, natural disasters, the coups the wars, the recoveries over this period.  The MMO that 38 Studios in Rhode Island is making takes place near the end of that 10,000 years, and when Big Huge Games was purchased by 38 Studios they knew that they wanted us to make a single player RPG in that world, so it was really great, they laid down this gigantic fantasy world for us and we were able to pick two or three places that we thought wow! That would make a really great game. '

'Where we landed was in a place in the timeline called the Age of Arcana,' continues Bean 'and it is a time in the world where magic had been stable for a while is now just exploded, doing weird things, throwing the world into disarray.  In this disarray, the player, through different means and through a device called the Well of Souls, becomes the first individual to come back from the dead. '

'This is meaningful in this world because up until this point everyone in the world of Amalur has a Fate, very predetermined, and people who were skilled at reading Fate, we call them Fateweavers in our game, could actually tell everything about a person's life, the kind of occupation they would have, who they would marry, when and where they would die, so it actually made for very depressing fortune telling.  And then the player comes back from the dead and in so doing is torn from Fate.  So this person that was never supposed to be there, supposed to talk to anyone, never supposed to even breathe the air essentially becomes 'the butterfly' in the butterfly effect that is now happening in the world of Amalur.' 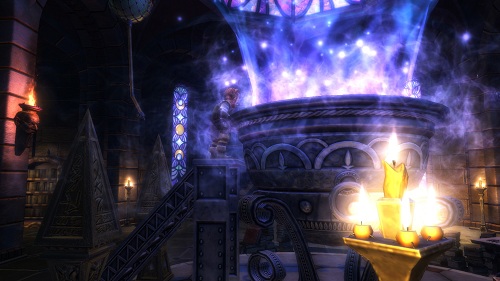 'That is one of the exciting things about being this player; you are truly the only agent of change in this world.' Concludes Bean

What about the all-important Questing system, how will that pan out in Amalur?

Frazier puts his hand up to answer: 'First and foremost, as Sean said, your character began dead and the game starts with a cinematic that talks about this huge war that is happening in the world, and in the midst of that you died and came back from the dead as the first person to ever to have done that. And so the main quest, the main story of the game all revolves around that.  Figuring out who you where before you died, how you got resurrected, what does it mean for you to be without a Fate?  That whole line of thought is the main quest.  But you can take it or leave it, players that aren't interested in the main quest or want to get to it later, can wander off the beaten path, do whatever they want.  We have six different factions in the game you can join; the Travellers, a thieves guild through to the Warsworn, a kind of holy order that used to fight in ancient times and all these different groups have their own stories and quests.  Finally there are hundreds of side quests that are unrelated to the factions or the main quest scattered throughout the world, all of these things you can do at anytime in any order.'

'A lot of these quests have multiple endings or different ways you can go about them, like you can spring a character from jail, you can either go pick the lock in the cell if you are good at lockpicking or you can go find the guy who has the key, pickpocket it from him and then go open the door or fight and kill him and then get the key to open the door.'

'Many quests unlock other quests, have an impact on other quests or in some cases change how characters react to you, like, you kill the high lord of a given town and people are not going to like you too much there .' 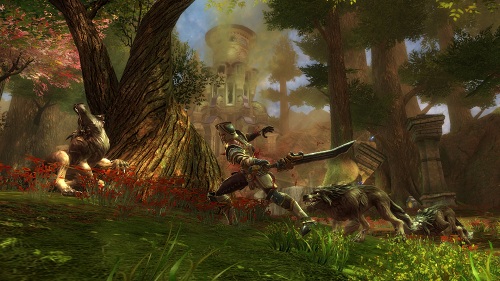 Back onto the equally important combat system, Reckoning seems to be introducing quite a flexible and tactical system reminiscent of titles in the pure fighting game genre.

'Absolutely,' says Frazier ' the combat system and how it integrates with the RPG system is one of the things we are most proud of in Reckoning.  You have over sixty abilities you can invest in across two different 'trees', and then we have massive amounts of loot in the game that is either dropped or hand crafted by the player using our crafting systems, and the combination of those and the Destinies - our class system that you can changeup throughout the game - which specific ability and how you choose to employ them at any given fight and what specific Twist of Fate (rewards earned for completing quests) you use, all those different elements play together in countless different patterns,  allowing the player to approach a single fight in so many different ways.  Obviously some are going to work better than others; there are tons of useful strategies you can apply at any time.'

Kingdoms of Amalur: Reckoning is scheduled for a February 9th 2012 release on Xbox 360, Playstation 3 and Windows PC

More in this category: « Both Xbox 360 and PS3 claim number 1 in Australia The Skyrim trap »
Share News tips for the iTWire Journalists? Your tip will be anonymous