Publisher THQ has given iTWire some early hands on action time with the latest Relic Entertainment title to bring the war-torn universe of Games Workshop's Warhammer 40K to digital life.  Space Marine is a third person action game that puts you in the gigantic magnetised boots of humanities greatest warriors, pitted against humanities most fearsome enemies.

James McDermott is from marketing at the (normally) strategic heavy high quality Relic Entertainment development studio.  McDermott is almost frothing at the mouth, eager to show off Space Marine, which is such a departure from Relic, normally associated with games such as Company of Heroes, Dawn of War and in the past Homeworld and other great strategy titles.

Space Marine is a definite side-step from Relic's past endeavours, instead of click based high level strategy, Space Marine asks players to step into a colourful set of power-armour and charge headlong into one-on-many battle. 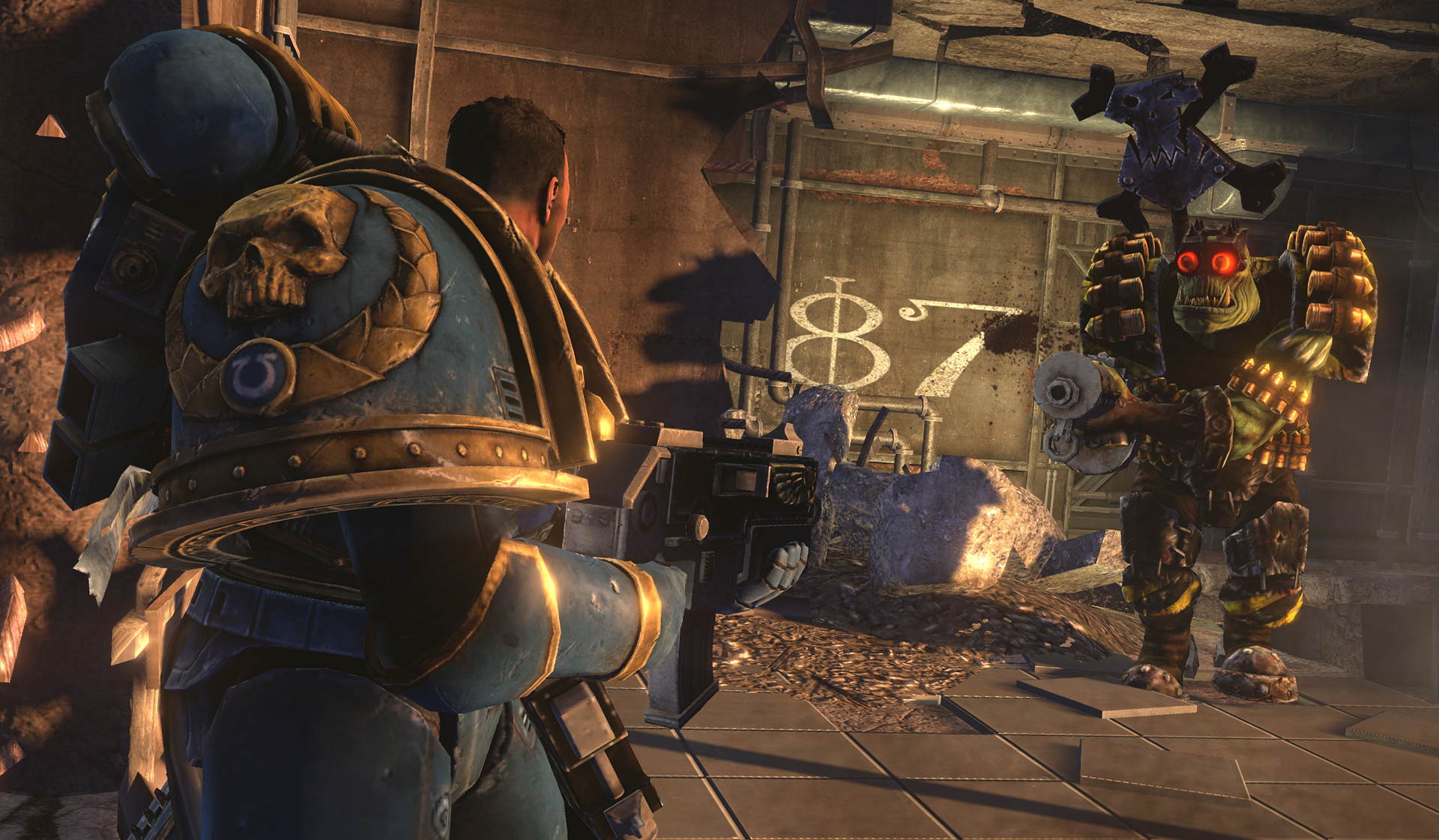 Certainly the screen fills with the blood of Orks (of various WH40K clans) and Gretchin as our hero, Space Marine Captain Titus wades into the fray.  Ork limbs are severed by the sweep of a chainsword, or blasted away from afar by the explosive rounds of Captain Titus's Boltgun.

McDermott shows off one of the games main design features, the seamless transition from ranged to bloody close combat.  One minute Captain Titus is safely pounding the Ork positions from afar, but as the enemy numbers overwhelm his ability to keep them at bay, it is time to bring out the chainsword and go to work. 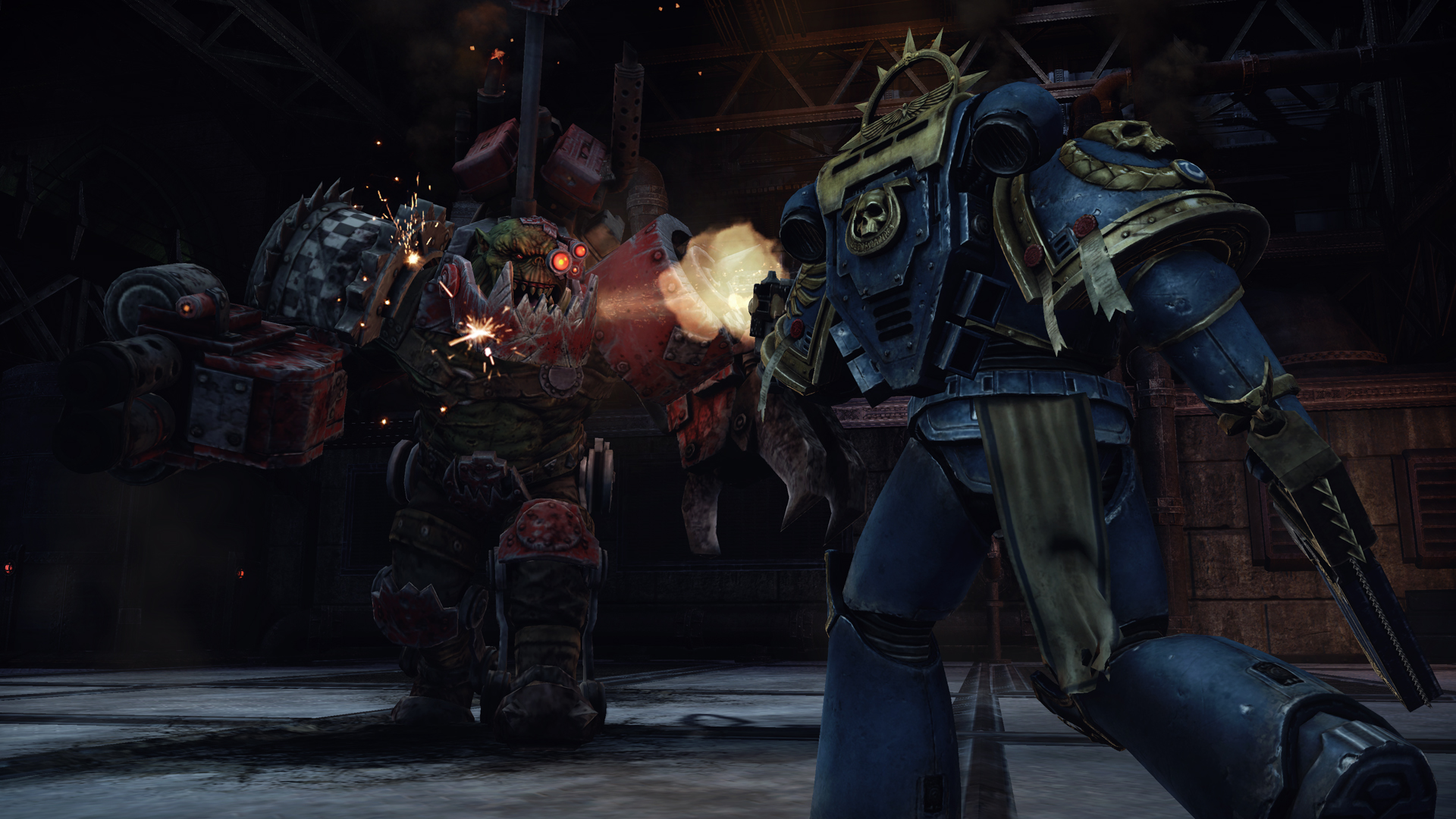 There is no 'gears of war' style cover system in this game, so despite the similar look and feel of a third-person sci-fi armoured bro-tastic game featuring chainsaws attached to weapons (Warhammer 40K had all of this first some fifteen years before Epic's game), the experience is entirely different.  No hunkering down behind walls for these non-camouflaged marines, instead Relic are encouraging us to get nice and soaked in alien blood during battle.

The Fury system further encourages violence.  Fury builds up with each kill, and goes nuts when a cinematic 'Sync Kill' is achieved.  Fury can be unleashed with an extra powerful melee or ranged attack, this is necessary from time to time as Titus will face some powerful Ork foes amongst the hordes of lesser greenskins.

For veteran Warhammer 40K fans the action takes place on an industrial forge world, and whilst we did not get the name of the planet, the story looks as if it will be close to that of the second war for Armageddon (though Armageddon was a Hive World).    In particular Titus and his squad will battle alongside Imperial Guard, around (and on Titans) against a coalition of Ork Tribes and then later against forces of Chaos (directing the Orks?).

Picking up the controller for myself it is clear that the team at Relic wanted the combination of powerful guns and equally powerful melee weaponry to give a sense of visceral awesomeness when playing as an eight foot tall genetically grown super-human soldier.  Fair enough.

The game uses a basic armour system, core armour surrounded by a regenerating power shield (ward), and features much of the iconic WH40K equipment fans will recognise.  Bolters, Plasma Pistols, Grenade Launchers and Chainswords were on show along with the sniper Stalker Bolter and McDermott promises you will see crowd favourites such as the Thunder Hammer, Power Axe and Laz Cannon in the game as well.

The story plays out in-game rather than with cut-scenes over the course of about eight hours in a single player campaign.  Disappointingly the game will take place primarily on the aforementioned Forge World, limiting the scope of environments. 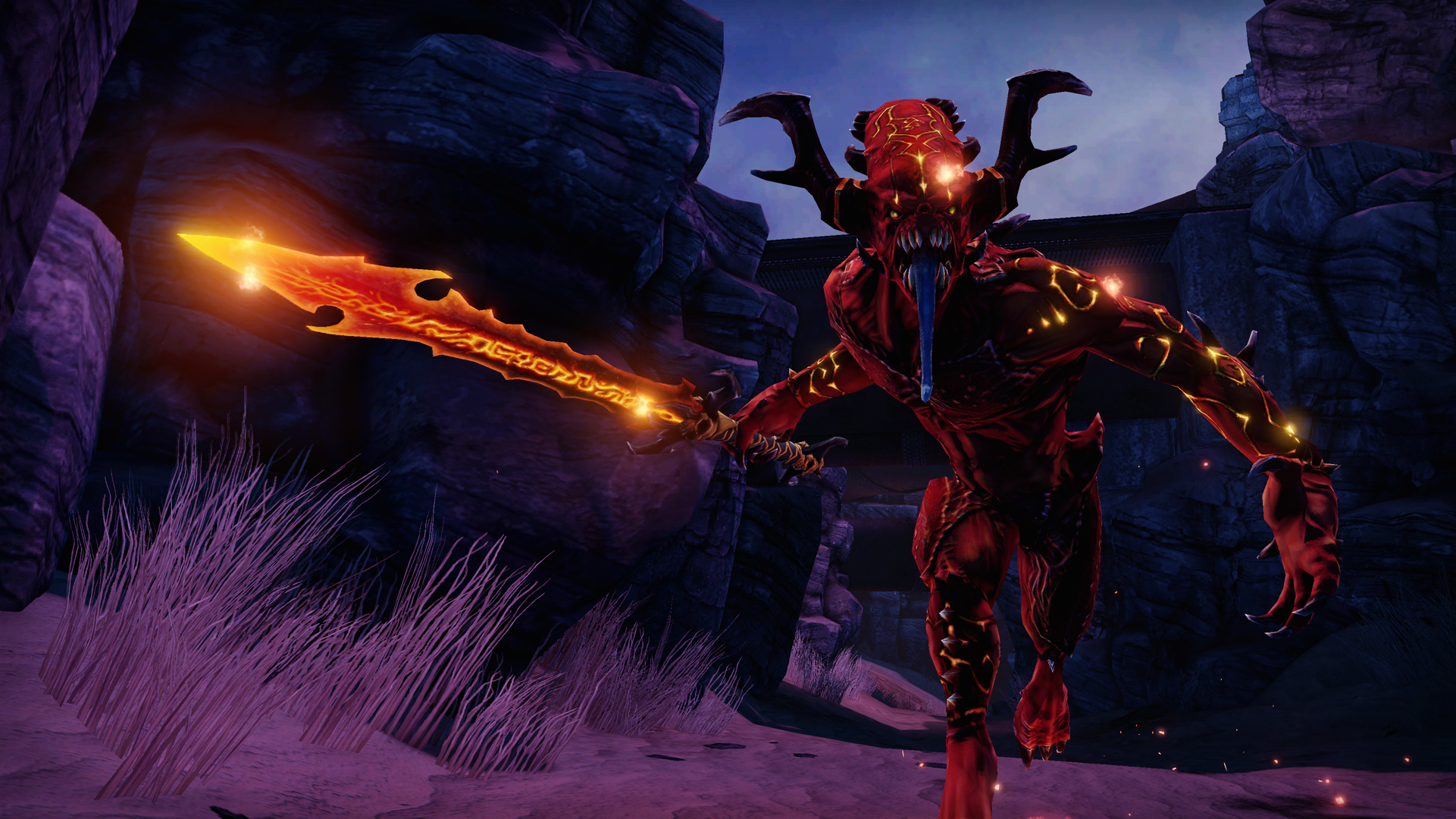 Enemies shown during the hands-on included Orks, Gretchin, Tainted Imperial Guard, and a Chaos Psyker/Marine, strangely this Chaos enemy looked to be a follower of the god Tzeentch, yet was summoning Khorne Bloodletters into the fray, perhaps the Games Workshop lore around the cooperation amongst Chaos has altered since last I dabbled in the universe.

Perhaps I was excited for this release, expectations high; it was disappointing that despite playing as a Captain in a Space Marine Chapter, there is no squad control built into the game.  McDermott tells us that the team at Relic considered this at one point, along with the inclusion of an RPG system.  In the end however the game reverted to its focus on bloody combat, with Titus's battle brothers and Imperial Guard AI providing support. 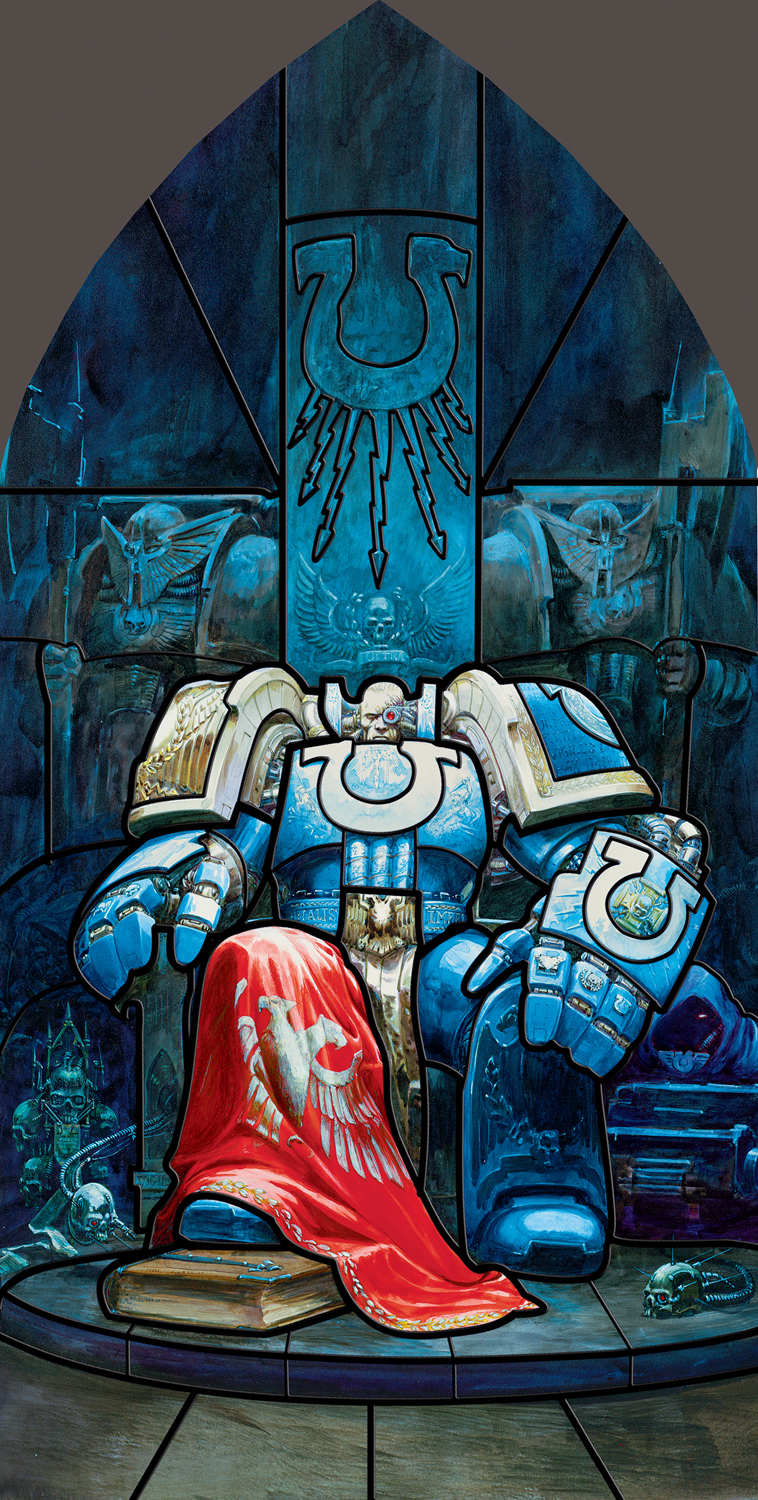 The game runs on a heavily modified Darksiders engine, and looks great, particularly the gritty lighting and character animation.  Whilst Titus is a member of the Ultramarines Space Marine Chapter, I am not sure the blue used on his armour is quite right, but certainly as the action explodes around him, purity seals flap in response to enemy fire and the semi deformable landscapes begin to be destroyed all is good.

There are no vehicles in the game, unless you count a Thunderhawk sequence, or a battle upon a Titan. 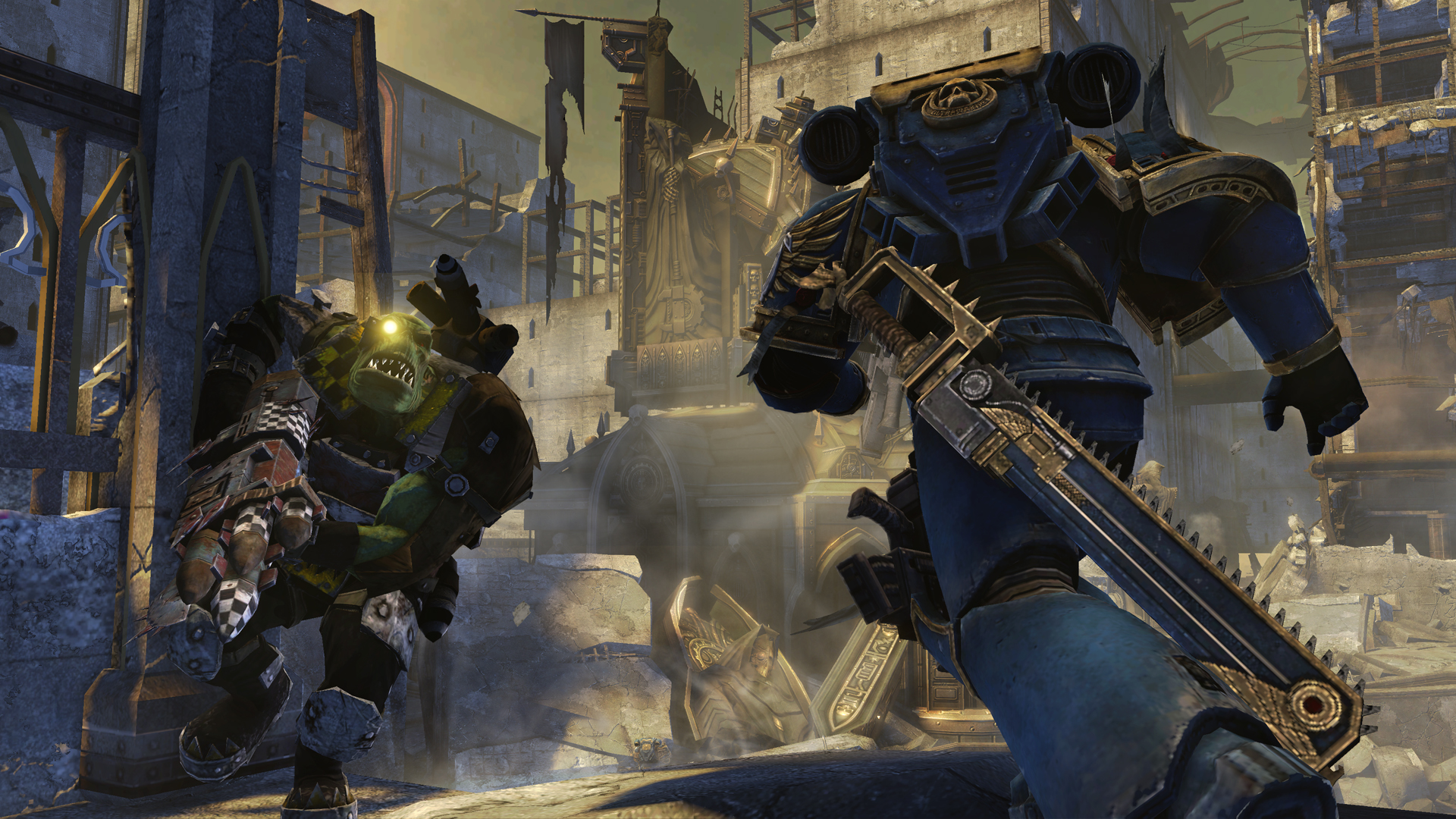 THQ and Relic are aiming for an August release of Space Marine, on Xbox 360 and PS3.
Read 4925 times

More in this category: « Do you really want a Wii HD? Christian Lobby confuses multiple arguments for R18+ game classification »
Share News tips for the iTWire Journalists? Your tip will be anonymous