Hands On: God Of War: Ascension

News flash! Kratos is still angry.  Even in this God of War prequel, Kratos is none too sociable in his dealings with evil minions of all sizes.

It took a couple of goes to get the debug code fired up, Kratos can be a bit of a pain in the neck when he wants to be, but once started God of War: Ascension sees our favourite painted Spartan back to his old bloodthirsty tricks once again.

Except this time around, they are not old tricks.  Ascension takes place prior to the original GOW game, just six months after Kratos is fooled into killing his family, but a full decade before the setting in the original game. 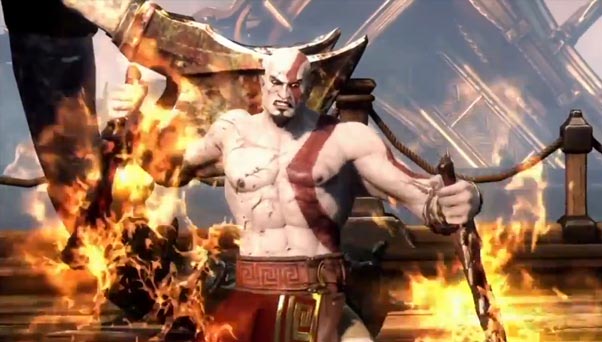 Understandably this is a time when Kratos is pretty pissed off with those that have both tricked him and are attempting to bind him.  Having killed all the gods in the first three games (plus PSP titles) it is only natural that Sony Santa Monica turn to a prequel for the setting.  The game expands on the story of the Furies, creatures created out of the turmoil of warring gods and driven to be the guardians of honour and by dint the bane of traitors.

For some reason that I am yet to fathom, Kratos gets labelled as a traitor, thus the opening scene of our hands on time is a chained, and yes, furious Kratos being tormented by the Fury Megaera.  Naturally – or it would not be much of a game – Kratos breaks his bonds and pursues the hag-fury for the rest of our hands-on game play (approximately the next half hour).

The beginning of Ascension is epic, it cannot quite match the epicness of GOW III with the unbeatable cinematic of battling over the shoulders of titans as they ascend Mount Olympus, but then, what could?

Instead we battled across the Grecian buildings taking on armoured foes that spawned from the surroundings before being met by annoying winged bug creatures that attacked as a swarm, or parasitically merged with humans to form more formidable enemy.

Kratos is up to the challenge however, grunting, swinging his chained blades, grunting, jumping, grunting and beating the living chitin off the bug creatures.

In fact the gameplay is quite forgiving.  At one point Kratos is battling a spawned creature, formed from the body of the giant, but largely inactive, Aegaeon, the Hecatonchires.  This creature is huge itself, and the cinematic camera pulls back to give a sense of scale.  However, this actual boss challenge is somewhat unsatisfying.  Flailing away results in a glowing white icon, which once snared onto turns into a joyously gory cinematic quite time sequence, and death to the big ugly?

I was surprised how easy the game was, failing to hit the requisite QTE buttons (which change each attempt) gets Kratos flung back to the surface to flail away and repeat.  I don’t believe I am that great at this style of game (think previous GOW’s, Devil May Cry, Bayonetta etcetera, etcetera), but I did not die once through this entire play through.

It may be that the game was set on easy difficulty, or I am underestimating my ability, but the first thirty minutes includes some nasty creatures that if I even knew were lurking in a dark alley four blocks away, would make me turn and run.  Yet as Kratos, were snuffed out without a bead of sweat breaking through my painted skin.

God Of War:  Ascension is due out on PlayStation 3 (I was rightly laughed at when I asked if there will be a PS4 version) from March 14th and will please fans of the series with more beautiful epic brutality.

More in this category: « BioShock Infinite: Interview - Dystopias are very appealing to us Hands On Preview: The Last Of Us – Modern survival horror »
Share News tips for the iTWire Journalists? Your tip will be anonymous