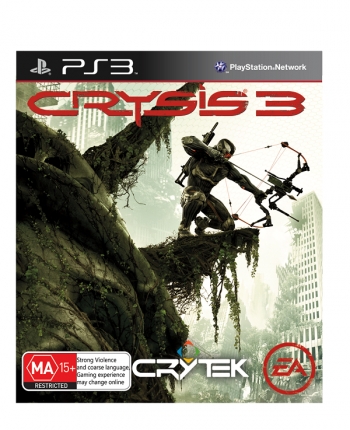 At the recent Electronic Arts APac Showcase we got some time with Crysis 3, including the new multiplayer mode, Hunter and a chat with Crytek producer Mike Read.

Despite how lucrative video gaming can be, it is still somewhat hard for even high profile development teams to find a niche that will capture a market.  With games such as the Call Of Duty franchise and Halo amongst others how does a game such as Crysis 3 make a splash?

Set twenty years after the battle in New York City to save humanity from the Ceph in Crysis 2, New York is again the centre of activity.  In Crisis 3 however it is a different kind of environment, encased in a Cell Corporation built Nanodome the city is under the impression this is a protective shield when in fact it hides new insidious research by Cell.

The Crysis 3 development team have created seven distinct locales, known as the Seven Wonders, under the domed, overgrown and somewhat alien world of Manhatten of surrounding areas.

“There’s a ton [of effort] that has gone into the environments,” says Michael Read, producer at Crytek “[in] Crysis 1, people had always said, ‘oh! It’s a very open world experience’, but no it really is not, it’s very focussed.  You have these visual references when you came up on a vista.  You would see the beaches and the trees, and the water and villages and you would go ‘wow! I can go anywhere!’  But you couldn’t go anywhere; you could walk around to some of these things.”

“And then [in Crysis 2] we came to New York City with its urban grid, big buildings,” continues Read “and if you have ever been to a big city, it is kind of confining, but we had a lot of vertical game play in there, so we wanted to roll back and combine both of those elements.  How do we make a city in a jungle and combine those two?”

“It’s amazing how even a simple thing like vegetation, when you add that to a scene it can make it feel more open than what it actually is.” Says Read.

In our single player time we explored an overgrown, abandoned and decaying railway yard.  The rusting effect combined with brilliant greens of foliage, smashed glass, occasional fire and filtered sun was magnificent.    The room is alive with flickering light and detritus of all manner,  and then the shooting starts.

Cell operatives swarm in from everywhere, rappelling down from the glass roof, vaulting through train cars and peppering the room I have taken cover in with gunfire.  They also send constant radio chatter through my ears, informing team mates of my position.

I return fire, and then jump out onto the balcony, but despite powering up the Nanosuit’s extra armour ability the fusillade of bullet fire is too much, forcing me back into the railway office building.  There however, hiding in the corner, possibly not discussing the Nanodome’s weather cycle, are two Cell operatives.  I dispatch these to somewhat hapless foes and head to the stairs.

Battling down the stairs, leaping high into the air using another Nanosuit ability, I am confronted by overwhelming numbers when I land, and am gunned down.  Whist that was disappointing, it was fantastic to note upon restart that the AI of the Cell operatives played out entirely differently.  Something that is refreshing to see outside of the Halo arena of shooters. 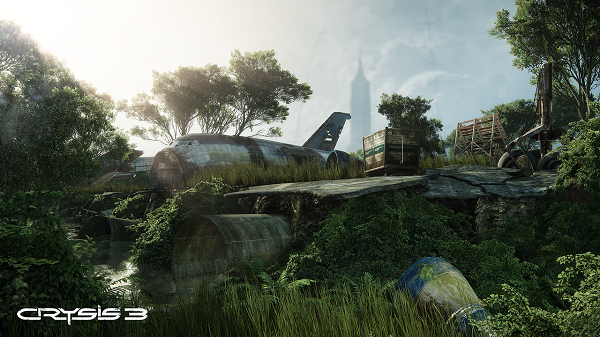 “The one thing we have done with our AI systems is something that came in Cry Engine that was a focus piece on tech that came in last year,” says Read “our AI Multilayer Navigation Mesh.  Basically allows designers to create the levels that they have, with water, rocks, trees and all these things and at the press of a button they can have the computer [calculate] ‘ok, I can walk here’  and these are cover pieces to hide in, there’s a little bit of tweaking that needs to happen,  but if you look at five years ago at what you would have to do to have AI – ok you have this little area here, you can hide here, you can go up, down and that’s that.”

“But what you will find in Crysis that’s really cool, and starting to come together now, I am starting to see it, is just how far the AI will go in walking around some of these areas ”. continues Read “You cannot turn a corner and go ‘oh yeah there are two guys over here’, you’ll turn the corner and go ‘oh wait, where did they go?’  They walked in some other direction.”

“Your play through could be vastly different to what mine is.” Says Read.

For the taste of Crisis 3 Multiplayer it was time to move from the PC to some networked Xboxes to take on a pod of fellow journalists at Hunter, the new multiplayer mode.  Here two players take the form of permanently cloaked aliens armed with bows.  The rest of the players play as Cell troopers awaiting rescue in two minutes time.

Each round (there are five all up) the bow-armed hunters must try and take out all the Cell troopers, turning them into cloaked hunters as they do.  The tension rises as one by one the troopers are turned to the Hunter side, waiting for the countdown timer to get to zero can be nerve wracking.

Unfortunately, the other journos were not quite up to the challenge, not to boast, but finding a hidey hole in a sewerage pipe, covering the one and only entrance, with ripples in the water (plus the handy motion tracking audio feedback) made surviving as a Cell trooper easy, and then as a hunter, the hapless milling journo-Cell operatives made easy picking.

Perhaps with a better group of friends (12 on console 16 on PC) this mode could indeed live up to the tension it is designed to produce. 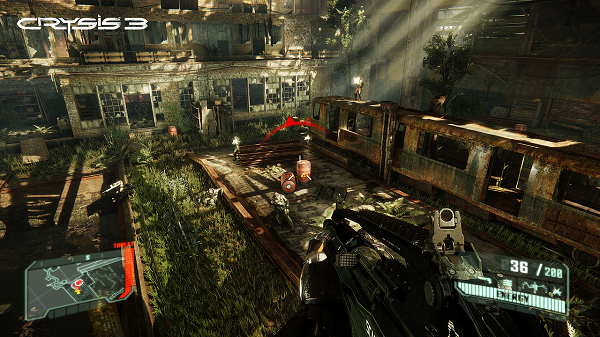 Was there anything that missed the design cut for Crysis 3?  “The big one that I have talked to the guys about, and one I think would work really well  is Co-Op,” says Read “I think Co-Op in Nanosuits and that kind of thing would have been great.”

“Co-Op is such a tough thing to get right, particularly with drop in- drop out features.” Concludes Read, hinting that given the size of the development team and budget that quite simply the resources were not available to ensure Co-Op was one of the bullet points on the Crysis 3 box.

Read explains it as: “normally people say you guys are just pushing graphics, and I say ‘no, no,no’”  in Crysis 3 it is time to give a shit about the characters.

More in this category: « Hands On: SimCity – now with multicity influences Hands On: Fuse – Is it going to blow? »
Share News tips for the iTWire Journalists? Your tip will be anonymous