Hands on: Borderlands: The Pre-sequel 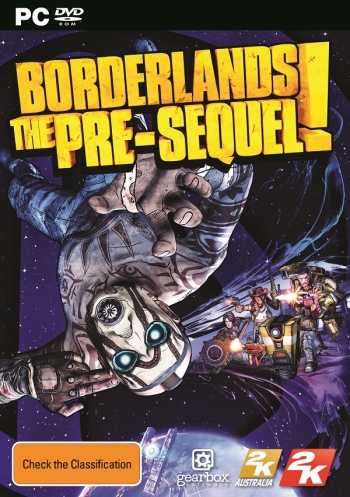 There is one problem with getting a hands-on session with a game like Borderlands: The Pre-sequel, after the session is over you are hit by random urges to jump back into the fray, and it then hits you that the game is not actually out yet damnit!

People are – for some strange reason –  thinking of comparing Borderlands: The Pre-Sequel with Activision’s behemoth Destiny.  Perhaps it’s the broad brush strokes of being a shooter with loot.

The reality however is Borderlands is – in my opinion – a far superior outing.  There was more coherent (probably not the right word given the mayhem involved) story in the ninety minutes we had with the Pre-sequel than for everything leading up to Level 20 of being a Guardian.

Borderlands: The Pre-sequel is so-called as it takes place between the events of Borderlands and Borderlands 2.   You play one of four (sorta)new vault-hunters helping Handsome Jack (the evil big-boss in Borderlands 2) saving the world from the also-evil Lost Legion.

The gameplay takes place on Elpis, a moon of Pandora and 2K Australia has taken the opportunity to add an amazing layer of extra shooter-strategy elements because of the new environment – iTWire.com spoke to 2K Australia Level builder Dean Walshe and Creative Director Jonathon (Jono) Pelling whilst we bounced around Elpis.

The first few things that struck us was that running on Elpis felt “weird”, almost slow, but at the same time, as you would imagine running would feel in a low gravity moon.

We were dropped in with Level 15 characters, and as such were able to bound high in the air, this adds a significant amount of verticality (fun word to say) to the game-play

“It’s really fun, because you are working on small arenas, each area is its own crucible [to actually steal something from Destiny] of combat” says Walshe about the level design in a low-grav environment.

Along with low gravity The Pre-Sequel adds Quake 3 style jump-boost-pads and the requirement to manage oxygen.  Oxygen can also be used to double jump to even greater heights and distances on each map.  For Walshe this adds more variety;  “multiple points of entry, with the ability to jump and soar over the battlefield.  Borderlands 2 had different elevations, with elevated sniper spots and secondary cover points, but it is something with the verticality, you can jump so much, you can soar, there are so many more options”

Butt slams (an elementally boosted ground-pound) is also new to Borderlands.  It is a satisfying move to cause area-effect damage from on high.

The team at 2K Australia risked taking the franchise to outrageous Saints Row style extremes.  In particular, even as a Borderlands fan and veteran, the new game-play elements can feel overwhelming to begin with.  Much of this however, was due to being dropped in at around level 15 and playing with Athena the gladiator, using a unfamiliar skillset.

It doesn’t take long to get in the swing of things, soon we are trying out some Butt-slams, the new weapon grinder (three go in, and hopefully a better one comes out) as well as the new weapon effects:  The freezing cryo element, and laser weapons, including laser shotguns.

“The Cryo [freeze] damage that we have put into the Pre-sequel was something Gearbox said they didn’t want to do.” Says Pelling “But we are coming in fresh not burdened with those former conversations and gnashing of teeth.”

We went about our business, conjuring up new hover vehicles (also with a butt-slam-like ability) as well as a nifty moon-buggy that we proceeded to drive off cliffs in amusing ways.

Eventually we learned how to master oxygen as a resource, finding pockets of O2 or canisters left behind by defeated enemies.  Oxygen depletes at a constant rate, faster if you bunny hop like an idiot.

There is a genuine Aussie flavour to this release, even down to the Oxygen Kits being known as OZ Kits:  “they are supposed to be O2 kits,” explains Pelling “but someone used a really bad font and so we started calling them Oz Kits”

“When we decided to make the moon a little slice of the Outback, it was very important to me – someone that loathes fake Australian accents in films and games and stuff – it was very important to me that we do all the voices in Australia with Australians.  The voice recording was split, between here, we had two UK based voice actors and the returning cast, done in the US by the original actors” says Pelling.

Wait a minute, Borderlands The Pre-Sequel takes place between BL 1 and BL2, how come there are no cryogenic or laser guns in Borderlands 2?

“That is all explained in the narrative very, very clearly”  explains Walshe.

“We are not dusty deserts anymore, we are shiny space – if you are going into space then you need lasers” says Pelling.

“It is the logical step from what is already established on Pandora,” says Walshe in support “you have got your scavangers, who you are primarily fighting.  They have all their moon equipment, spacesuits and mad scientific scrawls on the walls”

Is it Mad Max in space?

“It has all those qualities, but yes, in space”

Playing in the heat of a close-in battle on the lunar landscape, where both friend and foe is humanoid and wearing a space-helmet, things can become very confusing indeed, and hilarious.

I did not get to play as Claptrap, the high-five loving cyclopean uni-cycle robot who now steps up as a playable character, but by all accounts from others on the day it is both a funny, yet challenging character role to take.

“Randy Pitchford [head of Gearbox Software] really wanted to do it, and it seemed to be the right time” explains Pelling  “Claptrap is this Charlie Brown type character where everything goes wrong, but at the same time he needed to be able to kick arse, because that’s what Vault Hunters do.”
“It was a interesting challenge and conflict to fit that into one character”
“Vaulthunter.exe [Claptraps’s special ability program] is random, but powerful, so you will need to react quickly”

It will be interesting to talk to the development team say in four months time to see what the telemetric data is saying about who and how Claptrap is used.

The Pre-sequel’s skill trees have a greater emphasis on team supportive elements, meaning with the added layers of strategy, and extra threats around the moon lunarscape, people will benefit from working together.

“Claptrap in particular is the ultimate manifestation of that,” says Pelling “Claptrap as a character is defined by other people’s reactions and thoughts about him.  So as a playable character he needed to be that, he needed to be the one everyone notices and are aware of, frustrated with, but also loves.  His action skill more than any other effects all the other players, whatever happens to Claptrap happens to the others in some way.”
“If you have a Claptrap on your team, then you can’t miss it.  He is a mascot for the game, we spent a lot of time on him.”

BorderLands The Pre-sequel arrives on Xbox 360, PS3 and PC on October 14th – no word at this time about any version for the newer generation of consoles.

More in this category: « Interview: The Sims 4 – an ideal world that we should all be aspiring to Review & Interview: Driveclub »
Share News tips for the iTWire Journalists? Your tip will be anonymous