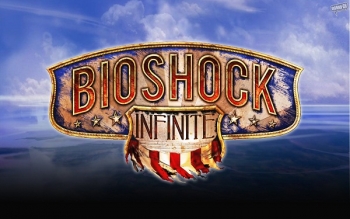 For four hours we have spent time in the mysterious and dangerous floating city of Columbia.  Riding sky rails, playing with magical Vigors and trying to get our head around the ideology, iconography and, well, weaponry of BioShock Infinite.

Down we went, past signs restricting unauthorised personnel beyond this point, through a number of corridors and gates to the Vault.  Here our 2K Game’s PR folks force open a heavy foot thick door and offer us to enter.  Down further stairs to a room decked with Alienware PC’s and screens providing a room illuminated by the BioShock Infinite menu.

Even for a journalist who has played many games over the years, the prospect of playing the third major release in the BioShock series from Irrational games, is to be honest, exciting enough to bypass any trepidation induced by the location.

It is 1912 Booker DeWitt is a former Pinkerton National Detective Agency agent finds himself on a rowboat in a mild rainstorm with two mysterious, and talkative folks who hand him a box with a simple instruction, rescue a girl to “wipe the debt clean”.  Ok, no problem, let’s do it.

Via a classic “BioShock” opening scene DeWitt lands on Columbia, the city in the sky, launched in 1901 but seceded from the USA following an international incident; the heavily armed floating city having fired upon Chinese civilians during the Boxer Revolution in China.  For the past decade Columbia has vanished from the minds and vision of those below.

DeWitt finds all this out via Kinetoscopes scattered within the city, but this is after the opening scenes set up the details of the personality cult developed by Zachary Hale Comstock, Columbia’s founder and to the faithful, known as the Prophet.  Also revered by this demi-religious sect, are Benjamin Franklin, George Washington and Thomas Jefferson.  And later, a statue of John Wilkes Booth, Abe Lincoln's assassin looms large in hero form.

It is like stepping into Disneyland, the Worlds Fare feel of a Columbia in peace and sunshine is a pleasant, joyous environment on the surface.  You can play the arcade games (not Frogger, or Space Invaders), listen to the conversations of well-dressed gentlefolk and soak up the carnival atmosphere.

But DeWitt soon finds out this utopia hides a racist and fascist core.  Winning a raffle, DeWitt (or at least me) must decide to pitch a baseball at either the slimy spruiker, or the interracial couple dragged onto stage, the obviously intended target for the raffle winner.

Either way, from this point on, no more Disneyland.  Noticing the ‘AD’ tattooed on your right hand – apparently the sign of the ‘False Prophet’ – the guards and general populace of Columbia become hostile, time to try out the weaponry of BioShock.

During our hands on, guns wise we managed to try out five, the quite effective pistol, SMG, very damaging carbine, a sniper rifle and RPG – all are very forgiving, causing critical hits a bit too easily.  Damage numbers from foes flow from their bodies reminiscent of Borderlands (an option I am told is able to be turned off).

Killing a pyromaniac gives us our first taste of Vigors (the forerunner to Bioshock’s Plasmids).  Most Vigors in the game have alternate ‘trap’ power-up options, so we were able to fling fireballs at the hapless constabulary, or set a firey booby trap for later on.

Apart from fireballs, the aptly named Murder of Crows is a great way to distract and harm groups of enemies, Bucking Bronco can cause enemies to rise into the air, helpless, but the most fun was to be had with Possession.  As seen in games such as Dishonored, a powered up Possession will get enemies to fight for you and turrets to attack foes.  Mayhem ensues.

There is nothing more stomach churning sometimes than a first person perspective shooter in fully flight, well multiply that up with the fact your locale is a floating steampunk city in the sky where one of the main transportation mechanisms is a rollercoaster skyrail system.

DeWitt can easily move around, and jump off (including a dismount attack) seemingly anywhere in Columbia, it feels like real freedom.  At one point I alighted on a balcony, broke through into the building beyond to surprise the occupants.  I noticed this particular abode was darkened, and adorned with paintings of Abraham Lincoln, an interesting choice given the more 19th century Southern attitudes to slavery and race evident elsewhere in Columbia.

Sneaking through the house I come across a couple of Negro youths cowering in a bedroom.  It is obvious there are factions developing, and some different outlooks on life other than Comstocks.


Eventually we find Elizabeth (supposedly the Prophet’s daughter, the ‘Lamb’ who was born after a gestation period of a week) high atop her tower prison.  This is another new Bioshock innovation, an AI companion who provides help during battle and the ability to create tears in time and space.

These Tears are only minimally used during the first part of the game, but open up unique opportunities for tactical combat, allowing access to different parts of the battlefield or bringing in new items to be used against foes.

Elizabeth’s ability to rip open the fabric of time and space also plays into the BioShock Infinite storyline, twisting aspects of reality (or, at least the reality where in 1912 a monstrous city can exist in the stratosphere).  Subtle example of this can be seen, or at least heard, when the duo find themselves at an artificial beach; Elizabeth is revelling in being freed from her prison and  dances and frolics while a barbershop quartet version of the Beach Boys God Only Knows (from 1966) plays, and then later Cyndi Lauper’s  1983 hit Girls Just Want To Have Fun play in the background.

Yep, Bioshock fans, get ready for some more of the immersive game-play you loved in the originals, but this time in a more populated environment with even more layers of mystique and intrigue and, probably twists and turns.  It could easily implode on itself due to the story layers, but my time with Bioshock Infinite has got me working on my employer to kindly give me time off from March 26th this year.

More in this category: « Dead Space 3 hands on and interview – Genres be damned! BioShock Infinite: Interview - Dystopias are very appealing to us »
Share News tips for the iTWire Journalists? Your tip will be anonymous