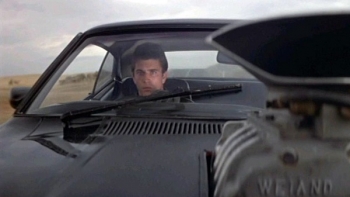 Between the original 1979 movie and the iconic Mad Max 2 (The Road Warrior in the US) two years later there is a large leap of story line, but there are constants between the surreal setting of Max’s revenge tale and the post-apocalyptic world of the spectacular sequel.  Mainly it was that black ’73 Falcon XB GT in the role of Pursuit Special V8 Interceptor.

Reinforced in the third Beyond Thunderdome instalment, it became clear that the environment of Mad Max was a primal wasteland of violence, harsh survival and Tina Turner chainmail.  It is this land that players will be stepping (and driving) into when Mad Max the video game hits PlayStation 3, Xbox 360, PC, PlayStation 4 and Xbox One in 2014.

Though he game has no link to the past films nor the upcoming production story wise, players will be taking the role as Max Rockatansky himself.  This is a single player game with intense vehicular combat as the focus of the action.

Developer Avalanche Studios is promising a huge open wasteland to explore both by foot and by (up to 50) vehicles.  Gangs, bandits and other challenges will make survival difficult for Max, and players will need wits as well as driving skill to survive.

Fans may be upset to learn that the V8 Interceptor will get trashed very early in the game, however this will free up players to team up with a wasteland mechanic – by the name of Chumbucket – to start rebuilding Max’s next ride.  Choose from different car bodies and a slew of upgrades including mounted weapons, armour and engines to survive another day.

“Mad Max places gamers directly into the driver’s seat of their ultimate customised vehicle to battle it out in the action-packed, open world of The Wasteland,” said Samantha Ryan, Senior Vice President, Production & Development, Warner Bros. Interactive Entertainment. “We are very pleased to work with Avalanche Studios to provide a next generation gaming experience with robust fighting paired with dynamic vehicular combat."

“Over a decade of creating open world experiences has led us to this point,” said Christofer Sundberg, Avalanche Studios Co-founder and Chief Creative Officer. “The Wasteland lends itself incredibly well to the high level of player freedom with which Avalanche Studios has become synonymous. This unforgiving environment inspired us to create a gritty and diverse experience where driving, fighting and scavenging are essential for survival.”

More in this category: « PS4 wins E3 and beyond Game Preview – DriveClub on PlayStation 4 »
Share News tips for the iTWire Journalists? Your tip will be anonymous