At the Electronic Entertainment Expo show in Los Angeles, Nintendo has revealed the snazziest piece of new gaming hardware the show has to offer.  Powering up the Wii to high definition levels and introducing a game changing controller that provides an alternate view for each gaming experience.  The Wii U and new touch-screen based controller may silence the Nintendo nay-says.

If there is one thing consistent about Nintendo, it is their ability to continually wow a crowd with innovation.  There have been some misses in the past (when will that vitality sensor see the light of day?), but generally Nintendo's engineers thinking outside of a paradigm approach to hardware design captures the imagination.

Despite the leaking of most of the relevant details, Nintendo's E3 showing of the Wii U (the legendary Wii HD we have been waiting for) received a fantastic reception from the amassed gaming press.

But again, it is not so much the hardware specifications (see below), more so it is the potential and the concepts brought to the milieu that Nintendo has achieved with the Wii U. 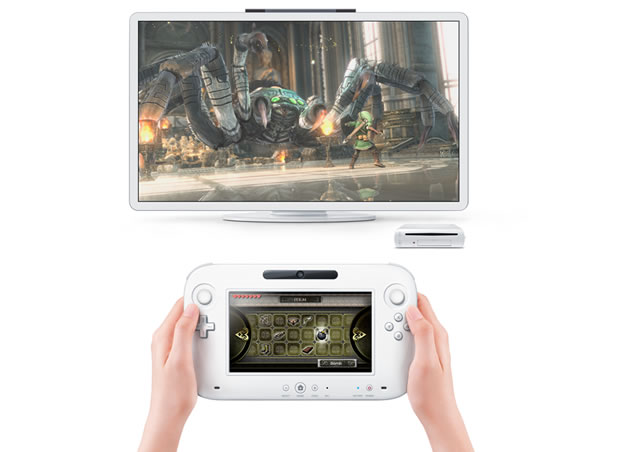 Much of the excitement centres on the new controller.  Nintendo has taken much that it has learned in developing hand-held gaming devices and brought it into the living room.  The New Controller (as it is known right now) looks like a blown up 3DS (sans 3D capable screen), with trigger and shoulder buttons accessible underneath the unit.

It sports twin circle pads along with the obligatory A,B,X & Y buttons and D-Pad.  It contains cameras, gyroscope, accelerometer, microphone and most noticeably a 6.2 inch wide format touch screen.

Nintendo presented a tech demo of the Wii U's processing power, showing off a small bird traversing a blossoming orchard above a tranquil pool.  The demonstration now has Nintendo joining HD gaming along with Microsoft and Sony.

This transformation means that game developers are no longer shackled by hardware limitations when considering a Wii port of their games.  As such, plenty of publishers jumped at the chance to announce Wii U versions of upcoming titles.  Batman: Arkham City, Assassin's Creed, Ninja Gaiden, Darksiders 2, EA Sports titles and Aliens: Colonial Marines are all heading to the Wii U, blasting away the only-for-children tag that the Wii brand has endured.

But it would not be Nintendo to just join the crowd.  The New Controller (NC) changes things.   We saw demonstrations of games such as where one player uses the NC to traverse a map, looking only at the NC screen, whilst four other seekers use the traditional Wii motion controllers (The Wii U is backwards compatible with all Nintendo peripherals and controllers) to hunt her down using the TV.

Another demo had the player using the NC to block incoming shots launched from an on TV pirate ship, and beyond, using the gyroscope, the NC wielding player can switch from side to side to ships not displayed on the centred TV screen.  It is a form of augmented reality, without the reality.

The Legend of Zelda: Skyward Sword makes extensive use of the NC, providing information on the touch screen for mapping and other commands, whilst the beautiful HD graphics play out on the big TV.

Speaking of the big living room TV, the NC provides a chance to disconnect from needing to hog the family entertainment unit.   The Nintendo demonstration showed a player using the NC to guide our little red clothed plumber through a game of Super Mario Bros.Wii.  But when his non-game loving house mate wanted to watch a baseball game on the TV, our Nintendo player was able to switch the video stream from TV to NC screen and continue to play the game like a hand-held, freeing up the living room for others. 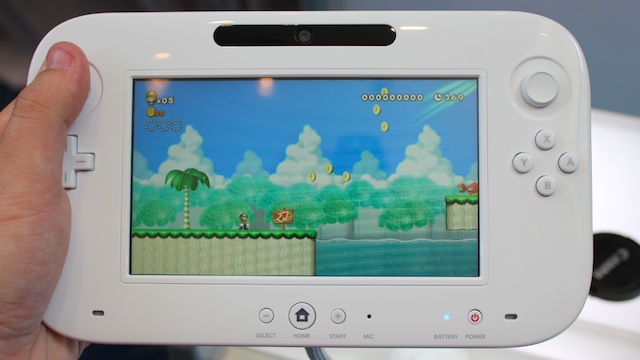 It is all good fun, nothing Sony could not do with their own combination of home console (PS3) and hand-held device (Vita), in fact, with the Vita's Wi-Fi connectivity, and Sony's already extensive experience with connecting the PSP to the PS3, in theory there should be more options, but Nintendo will bring it to the household quicker and simpler than Sony can, that will be the difference.

Here are the Wii U specifications as we currently understand them.  I am a little disappointed it was not named the WiiWii.