It certainly lived up to the mystery the PR team were hoping to deliver.  Last night Alienware gathered together a varied bunch of journalists, gamers and sundry others to launch an enigma at Area 52.  There was certainly some confusion as to what was about to be experienced.

I knew I was in the right place when I parked the car next to a gaggle of bewildered looking beared gentlemen.  Yep, at this time of night, in a lonely dead-end road in South Melbourne, a group like that was either a bunch of lost footy-trip players on a night out, or a group of tech-journos looking for a launch venue.

It is not yet the end of the footy season, so option two it was.  Eventually, using our navigation skills (and a handy and friendly security guard) we found Area 52, and hopped up and down in the cold awaiting the dealing out of our pass lanyards.

Inside the venue, Alienware laid out for our use the four recent configurations of gaming netbooks, from the M11X up to the M18X including the M17x running Nvidia's 3D Active Shutter system and a copy of Crysis 2. 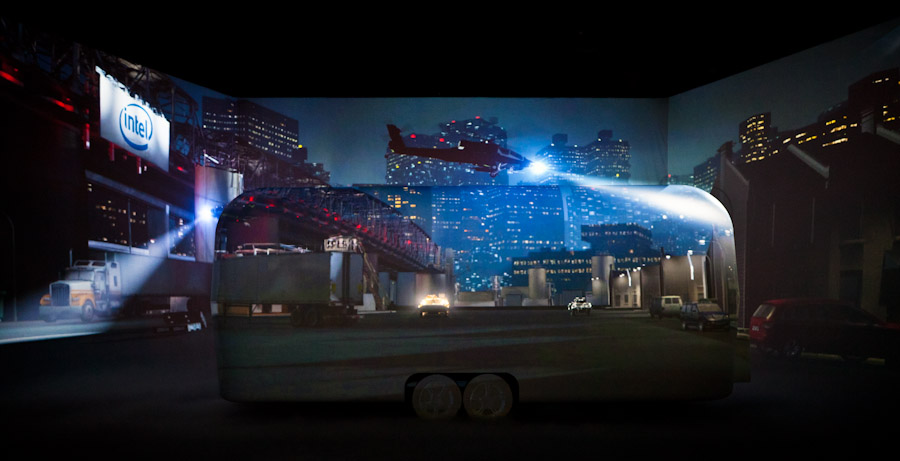 The garishly lit (customisable thankfully) machines also showcased beautiful and smoothly running versions of Portal 2, Dead Space 2, Medal of Honor and Bulletstorm.  These netbooks are pretty impressive to look at, chunky by comparison to other brands, but given the power harboured inside, it is a need package for mobile gaming.

Less impressive was the desktop configuration running Shift 2: Unleashed compete with fully fledged sound and wheel controller layout, which was struggling to maintain a reasonable frame-rate to the sizable display.

Still, none of that mattered; today this group were ushered in to be filmed experiencing the Alienware Live Dimension Reality show.  Whatever that was.  Before us was a room of white with a large round edged squat rectangle of white, with two small circles of white at its base taking prime position in the centre of the room.  The rectangle was approximately eight feet high and 15 feet wide.

The lights dimmed and the audience were treated to - initially - a pretty impressive projection show, utilising both the background and rectangular foreground which was transformed into a space ship, complete with jet boosters and a trip through space, including a meteor storm, with the background giving the impression of movement culminating in the craft landing in a city on Earth.

At this point actors entered the room, dressed as Special Forces personal.  At one point a soldier approaches and touches the alien craft triggering a fire-fight involving much shooting, loud explosive noises and in-room pyrotechnics.  Smoke, stunts and ultimately the unveiling of the Alienware Airstream. 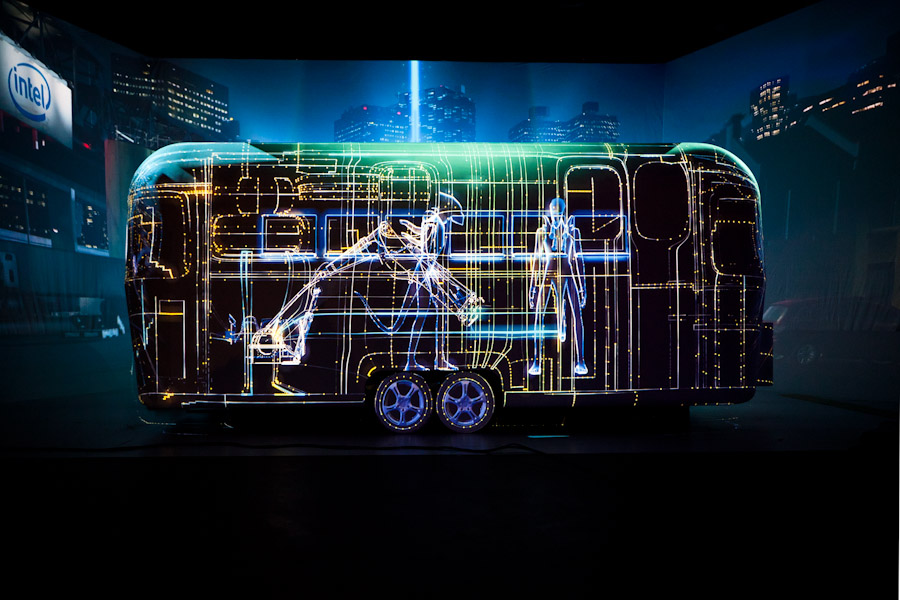 Yup, all of this (very impressive) hoopla was to announce that Alienware will be on the road throughout Australia in a souped up Airstream retro-metallic bus.  The Airstream will be equipped with latest line-up of Alienware machines, and for the next three months will settle in various locations in Sydney.

According to Cath Hodgson-Croker, Marketing Director for Dell in Australia; 'Tonight was [about] showing off the Alienware portfolio for gaming solutions and importantly, using that technology to bring a different story to life which was around the live dimension reality that we created'

Alienware partnered with some of the world's leading special effects designers from Boffswana to develop the world-first live three-dimensional reality experience. Boffswana, a creative technology company made up of award-winning designers, animators, developers and coders, pushes the boundaries of interactive communications. 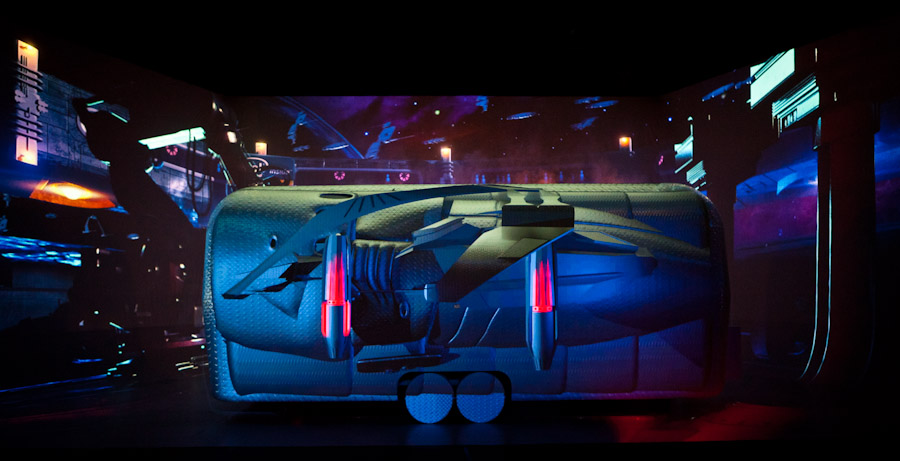 Rob Stock, Executive Producer from Boffswana explained how the company put at least three months of design and implementation work into the approximately eight minute show:  Alienware was the driving force behind the production of Area 52, and Alienware computers were used exclusively for the high resolution rendering of the 3D projection mapping and film. Two Alienware machines rendered 2400 high-definition (HD) frames per day with a total of over 50,000 unique frames rendered across four weeks. The audience experienced a total of 104,070 frames output through ten HD projectors.

Hodgson-Croker said that whilst the dual projection process had been done before, never had it been combined with pyrotechnics and stuntmen breaking down the barriers between audience and show.

After its three months in Sydney the Airstream will probably jet up to Brisbane 'before it gets too hot,' and then may return back to Melbourne prior to Christmas.

iTWire.com asked Miami based Jorge Perez  Global Marketing Director for Alienware  why Melbourne was chosen for the launch? 'It was the association with Boffswana headquartered here in Melbourne, we wanted to show this off as a worlds-first technology about innovation, not just on the product side but also on the marketing side, so this seemed the natural place to do it' 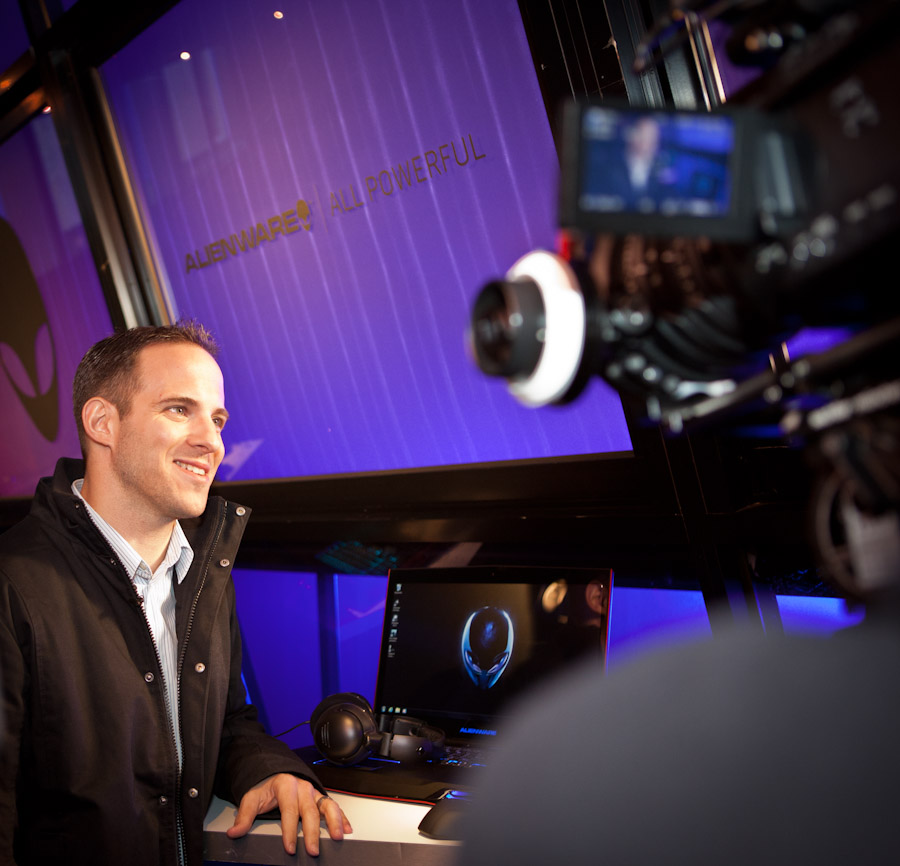 'It's a very creative community here in Melbourne as well' added Ms Hodgson-Croker.

We were intrigued how Alienware viewed the perceived shift towards console gaming;  'The way we view the market is that most gamers play games, and the device is secondary.' Says Perez 'What we have seen is that about 80 to 90 per cent of our customers play games both on their console and PC.  The reality of those numbers is that no single console device is bigger than the PC gaming market, their roughly the same size, consoles, when you combine all the different kinds of consoles out there is just a little bit bigger.  The reality is that some games are better for console and some are better for PC, we have seen a shift towards PC gaming, there has been a huge growth outside of the hard-core, towards casual and mid-tier gaming on the PC.  To us gaming is not device-centric, for us we focus on PC gaming, the hard-core gamer, but really the persona of the gamer is everybody now days.' 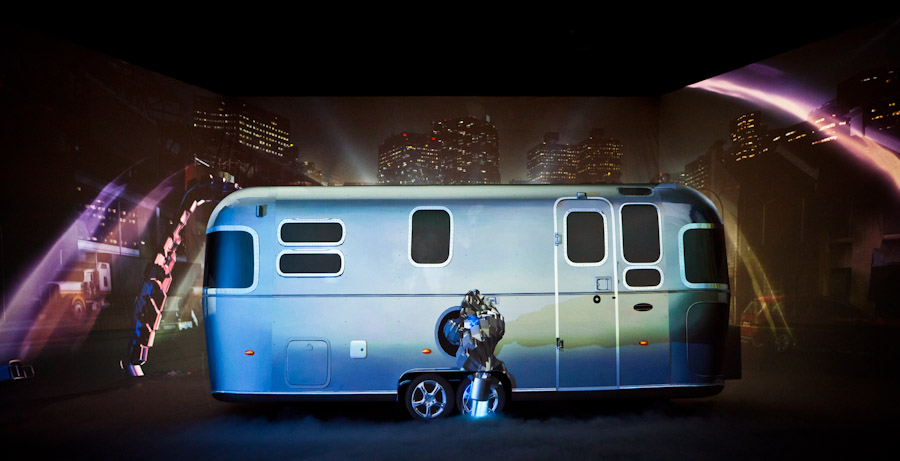 'The desktops are still a priority for us, but we see a lot of room for innovation on our side in the netbook area.  We are now able to extend gaming down to form factors that a little more reasonable to the mainstream gamer.  And by mainstream I don't mean what kind of games they play , it's more of a standpoint  of the mobility they want, the colour they want, allow them to experience the form factor that is more suited to their lifestyle'

Where does Alienware perceive its competitive differences are?  'Everything,' says Perez 'We really don't build products unless their innovative.  We have passed on form-factors that we thought 'yeah Alienware could do something there', but it's not different from what we could do with the Dell brand, so why would we do it?  We have tried to stay true to who we are and what we focus on.  We try to innovate, when we launched the M11x, it was big innovation in bringing gaming down to a small form-factor.   We redefined what mobility means for gaming.'

What about 3D?  '3D is an emerging technology, 3D is not for everybody, but what we are seeing is that it is growing, game content is being developed in 3D because you are experiencing 3D worlds, so the jump from gaming to gaming in 3D is quite small, but it is limited by the technology, so right now we do run M17x with Nvidia's Active Shutter 3D gaming technology, and we just launched the Nvidia 580M card.'

Certainly for us, 3D gaming on a netbook seems more sensible that at home on the living room big-screen, and iTWire certainly had fun getting blasted to 3D smithereens during our limited Crysis 2 play-time on the 3D M17x.  You too can try it out when the Airstream breezes by your town. 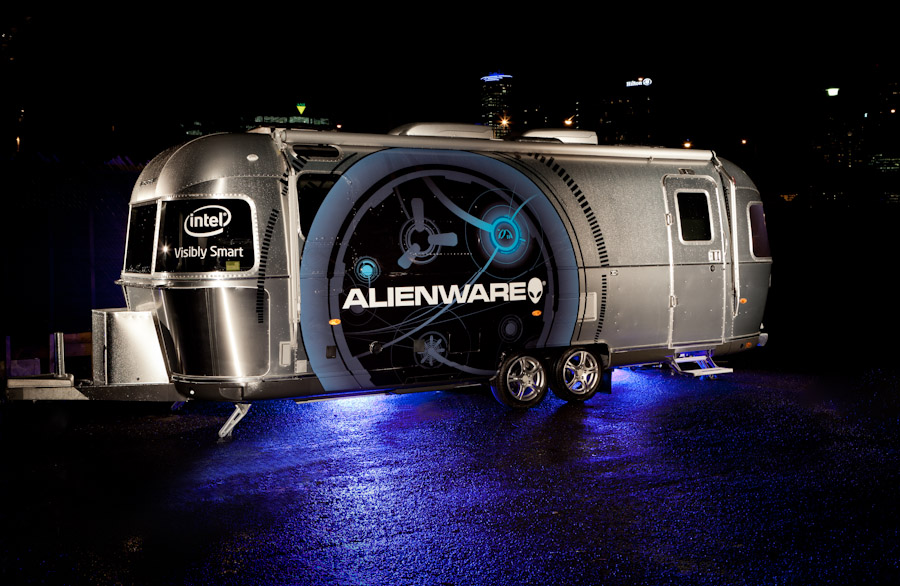 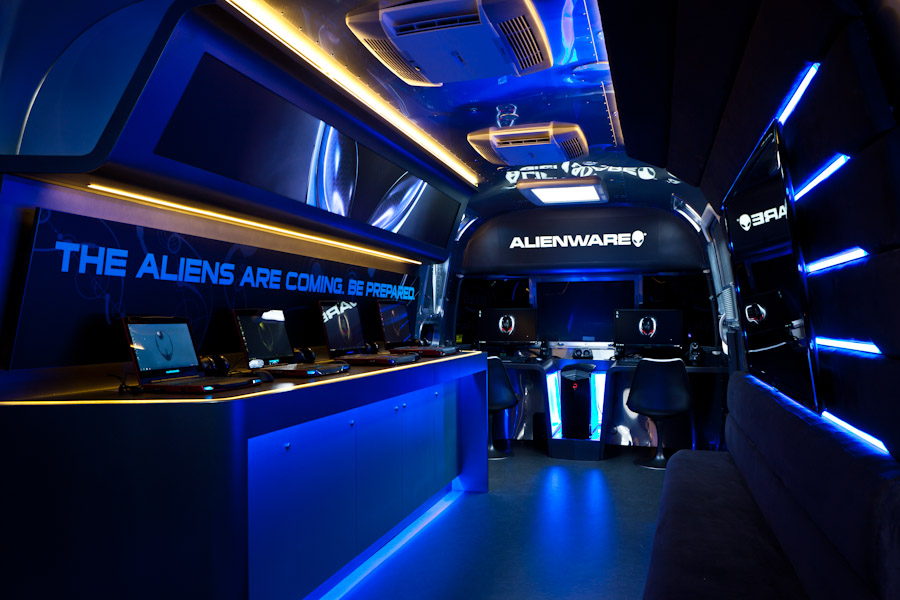 More in this category: « Australia gets in-principle R18+ Classification for video games Sony and Microsoft should combine for next gen console »
Share News tips for the iTWire Journalists? Your tip will be anonymous