The bloke in charge of .au 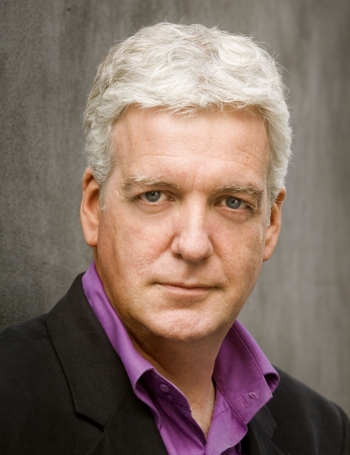 Chris Disspain is the bloke in charge of the .au domain. It’s his job to make sure that when you search flowers.com.au you’re likely to find a business based in Australia that has something to do with flowers. Not all countries manage that, but in Australia it pretty much; “does what it says on the tin,” says Disspain.

He’d originally planned to spend 12 months in the role as CEO of .auDA. Instead he’s been there for 12 years, a period which has brought enormous change to telecommunications and technology – not least with the unfolding of the national broadband network plan. So from his vantage point is the NBN a good idea?

“From a technical point of view, anyone who tells you that wireless can be as good as fibre is incorrect. One person on fibre and one person on wireless can achieve impressive speeds. The problem with wireless is it degrades.”

But as a lawyer Disspain acknowledges he could argue for or against the need for fibre.  “I cannot see any business that would benefit today from having an NBN – that’s true, but once it’s there then all sorts of things are possible.”

The art of the possible has long exercised Disspain, from his earliest years when he wanted to become a magician – but the communications roots can be traced further back.

Disspain’s father, who was 50 when his son was born, had been a telephone engineer before the war, while his mother left the WRNS to become a telephonist. After the war his father started his own business and focussed on directing the education of Disspain and his younger sister.

“I wanted to be a magician – still do,” he says, but “my father was obsessed with me having an education, I went to private school and was an anarchist – Mill Hill. It was the ‘70s, I was a day boy and hated it for about three years. Then I kind of decided I could manipulate it to work in my favour. I did music and played at being a DJ and collected magic tricks and my dad kept the pressure up.

“During the ‘O’ level year (age 16) we did a careers test – and about three weeks later a letter came addressed to my parents … mine said ‘advertising, teaching and public relations’. My dad’s response was ‘advertising’s for poofs, teaching’s for girls and what the hell is public relations?’

“He said you can be an architect, accountant, banker, doctor or a lawyer. Given that I can’t draw, can’t count and faint at the sight of blood off I went and became a lawyer.”

With the magician’s cloak packed away Disspain studied law at London University, took articles and began working at the law firm his father used, becoming a partner in his mid-20s.

Focussed on commercial law and mergers and acquisitions, Disspain started working for a number of mining companies based in Western Australia. After a trip to Perth to finalise a deal for a client he eventually emigrated.

In 1995, after operating his own Australian law form for a while he came to the realisation that it wasn’t ever his goal to be a lawyer – it instead had been his father’s goal. He realised that the only reason he hadn’t stopped being a lawyer was he worried it was a waste of the suits in his wardrobe.

Setting his suit angst aside Disspain left the law, but continued with a number of board positions before getting involved with a project to develop a goal setting programme, that was eventually published in book form and became a best-seller.

In the late 90s he and his partner developed an internet based version of the programme. “Two years later I woke up and realised what we had – I’d thought we were running a new-age business, but we had a database which was very deep. We ended up selling that to a shopping site in America in the boom days, which promptly went broke. We got paid almost all the money.”

He made the move to become the chief executive officer of .auDA in 200 after responding to an advertisement in a newspaper.  At the time he’d said he’d give the role 12 months –he’s now been there more than 12 years.

So what is .auDA’s role? Disspain sets the scene with a primer on the world wide web. “You type in  www.abc.com.au into the browser – the central database run by ICANN holds a list of the servers for every top level domain, .au is the top level for Australia, .com is the generic top level domain .

“The browser is programmed to look at that and immediately go to the closest root server – there are only 13 of those. Say send me to .au, the root server has authoritative list of the 246 countries and currently 22 GTLDs (generic top level domains) and says that is run on. auDA by .auDA, here’s an .auDa named server, and says to your computer ‘go there’.

“Then it goes to .auDA’s server and says you want net.au – we have authoritative list of every second level. The computer sends you to the ABC’s server, which says you want the web page. That’s how it works – and we run the .au servers and the second levels too but choose to get  AusRegistry (now trading as ARI Registry Services) to do that on our behalf.

“Our job is first to run it, make sure it works, is secure and safe and 100 per cent available – and the second job to set the policy by which domain names are registered in Australia. In some countries there are no policies. (Our approach) means Australians know if they go to flowers.com.au –it will be a business, Australian and something do with flowers.”

The organisation is currently mulling a proposed overhaul of the security framework governing domain name registrars, although a decision is not likely to be taken on the proposals before February 2013.

In the meantime .auDA is in the final stages of planning the first Australian Internet Governance Forum which is scheduled to run for two days in Canberra in October and is intended to provide stakeholders with a forum to discuss the future of the internet, the world wide web and its governance, use and security.

Says Disspain; “Running this stuff is not just about making sure you have protections in place – but being able to move really quickly and nimbly and not necessarily check permissions with people every step of the way. The way to do it is to have a co-operative model where we deal with arms of government on a regular basis – with government departments you don’t often hear about, that don’t carry their own business cards.

“We work with CERT, we have protocols with most of the state and federal police, with the ACCC with ACMA and so on. We are involved with discussions all the time on security threats – that’s the way to deal with it.”

The legacy of the current .auDA framework according to Disspain will be internet access which is safe, secure and stable.

“I think what we have is an environment in the .au space that is safe secure and stable and does what it says on the tin. And that in the face of an industry when we took over that was absolutely determined to have no rules no policy and a free for all where registrars could sell as many names to anyone as they wanted.

“The middle ground where there is some stability, rules and policy is good for everyone.”
Read 37689 times

More in this category: « Deloitte peers at the edge Dad, his lad, and the contact cloud »
Share News tips for the iTWire Journalists? Your tip will be anonymous