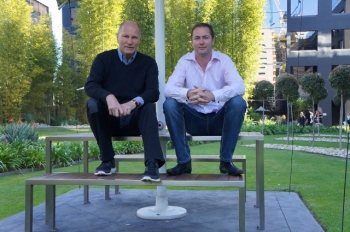 Kevin Panozza and his son Aaron Panozza work together, drive fast boats together, and spend a lot of family time together – but they didn’t grow up together.

Kevin was, for much of his son’s youth, a “school holiday dad” – flying in to spend time with his son (or flying his son interstate to see him) when he could wrest himself away from selling encyclopaedias door-to-door or waterfront property to cashed up miners in WA.

Today they are respectively the chief executive officer and managing director of Engage, a Melbourne based business established by Aaron to deliver contact centre as a service based on Genesys systems, which is now being marketed by Telstra, and to deploy Liveperson solutions for clients. With a headcount of 30 people and a turnover around $10 million Engage has already racked up clients including the four big banks, Officeworks, Webjet and Optus.

Aaron set Engage up in 2009, within days of leaving Salmat – the company which had bought his father’s call centre business, SalesForce, in 2005.

Call centres and selling are in both Panozzas’ blood. Kevin set up SalesForce originally to service the call centre needs of Ansett. Aaron – now 42 - joined his father in the business in his early 20s, initially working in Ansett’s call centre, and later becoming SalesForce’s IT director responsible for developing call centres for a long list of blue chip clients.

It’s unusual to find a father-son combination working together quite so closely – but then it’s a father and son who didn’t spend much time together until Aaron was in his 20s.

Kevin’s father emigrated to Australia with his two brothers during the Depression, and made a living cane cutting and pouring concrete graves. With two much older siblings, Kevin grew up as a quasi-only child in Geelong.

After briefly entertaining the notion of becoming a lawyer, Kevin instead - “Because of a very strong streak of irresponsibility” - started selling encyclopaedias. “I learned to sell in the most difficult environment on the planet which was knocking on peoples’ doors at nine o’ clock at night and trying to sell them encyclopaedias,” he says.

A born salesman by all accounts he later sold property to cashed up miners in WA, before starting to work in sales for Ansett, and later to set up call centre operations for the airline which was the genesis of SalesForce.

Kevin, who turns 64 in October, acknowledges that it’s been luck rather than planning that has fuelled his career. “I never had a plan. I just got up and make the most of every day and became an opportunist. It doesn’t matter how clever you are and what you know, without opportunity we are nothing. I became very adept about being opportunistic.”

Aaron’s childhood was something of a casualty to Kevin’s opportunity, and he was raised by his mother, often in a different state to where his father might be working at the time.  “I was one of those school holiday fathers and I have great regrets about not spending more time with him as he was growing up,” says Kevin.

According to Aaron; “I just remember him every now and again turning up. I lived with my mum and I really missed him. He was really nice to me when he turned up.” He remains particularly grateful for the gift of a Commodore 64, which unleashed his interest in technology.

After a far from spectacular schooling experience in Altona North Aaron was plunged into the workforce when his mother suddenly lost her job. He spent five years working in a plumbing supplies business, often forced to do the toughest jobs – unloading truck-loads of concrete slabs, or opening shop for hard drinking, tough talking tradies – daunting tasks for a skinny 17-year old.

“In 1994 my dad had started this small business in an Ansett air freight terminal and there was an evaporative cooler on a stand – I thought this was just the most luxurious work environment. I was rolling over at 7 in the morning to roll up the doors for plumbers who’d already had half a dozen beers …to an opportunity of an office with an evaporative cooler.”

After a couple of years manning the call centre phones Aaron staged what his father refers to as a “palace coup” and took over the role of IT manager of SalesForce. The business secured blue chip clients including Ticketek, Panasonic, Ansett, Sony, Medibank Private.

By the early 2000s however for various personal reasons and because DDB was eager to sell, Kevin was looking for opportunities to offload SalesForce. Enter Salmat, then best known as a junk mail business.

“Salmat looked like a great company to sell to. They were entrepreneurial I thought and well led, but sadly after two years of trying to work with a public company and the management style they had it occurred to me that their greatest interest in life was maximising the profits by reducing costs – which was the reverse strategy to the one we had - we always overinvested and chased growth from the sheer talent perspective,” says Kevin.

He left, and was followed later by Aaron. Within days of leaving Salmat Aaron set up the Engage business – which was to focus on developing contact centres for clients, but also delivering cloud based services. After six months’ research and planning Aaron was ready to kick start Engage and a chance meeting with Peter Clemenger, who had once sold encyclopaedias alongside Kevin Panozza – “my Dad’s like the internet – his network’s unbelievable” - led to advertising agency Clemenger talking a 40 per cent stake in the Engage business and effectively bankrolling it through the start-up phase.

As far as Kevin can see the main customer issue for any business today is that; “A 22 year old girl with an iPhone can price any product, read any review…the customer today has access to incredible knowledge and choice.

“What companies need to do is find a way to instantly engage them and satisfy the customer’s expectation – which today are off the planet – that’s why so many companies are struggling and taken to task over their poor call centre performance - because they are not able to engage customers with the speed and intelligence that the customer is demanding.”

Aaron says that by offering a cloud based solution it’s possible for clients to react much more quickly to changing market conditions. “If you approach this in the traditional way – you’ve got to spend immense amount of money on the infrastructure, then another immense amount of money configuring it. By the time you’ve finished that the world has changed so much you have a solution that’s two years behind the times.

“We’ve got a team of creative and experience engineers who sit on the multi-tenant platform all the time – one cloud based solution with our engineers wrapped around it – all we need to do is configure it.”

Today the Panozzas, Kevin and his two daughters from a second marriage, Aaron, his partner and son and daughter, spend time together outside of the business often taking their high speed boats out for a spin around the Bay – and it’s a relationship that no longer pivots around just the school holidays.

So, is the work relationship as positive today as when Aaron worked in Kevin’s business?

“It’s much better – because I’m the boss,” quips Aaron. “My mentor is my dad who was with me from the start – without that it would have been very difficult.”
Read 53391 times

More in this category: « The bloke in charge of .au You talkin' to me? »
Share News tips for the iTWire Journalists? Your tip will be anonymous