A simple twist of fate 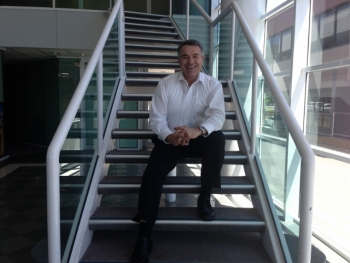 Had it not been for a nasty parasite which Ian Lindgren ingested when deployed with the Australian Army in the Middle East, contractor management company PayMe Australia might never have come into being.

Lindgren had joined the army as a young man, and risen through its ranks, ultimately taking on a role as chief information officer of a peacekeeping voice until he became unwell. After receiving a medical discharge, Lindgren worked as a contractor, and finding himself very dissatisfied with the services that contractor management companies were offering at the time, decided he could do it better, and PayMe Australia was founded.

In the current ICT skills market contractors are very much in the ascendancy over permanent hires – which is driving demand for specialist contractor management. It’s fuelled significant growth for PayMe.

Established in 2006, PayMe has grown by 120 per cent a year on average – and in some years by over 400 per cent according to Lindgren who is the company’s chief executive officer. In the first year it had salaries of $600,000 running through its books – a year later that had grown to over $9 million.

Lindgren says that it now has over 1200 contractors on the books with a combined payroll of $133 million.

Over the last two years he has deliberately put the brakes on growth in order to have time to work on rather than in the business. Based in Canberra with an office in Perth, he has ambitions to open in South Australia and Victoria next year, and open the PayMe Group which will offer a broader range of services, from March next year.

Lindgren claims that what sets the company apart from rivals is the quality of the services it offers. “We utilise qualified industry experts in terms of tax lawyers that are external, and employment barristers external to PayMe and our senior staff are educated on current laws and changes to laws. That way we can provide people with the best-practice advice in each of the States.”

PayMe is also choosy about the companies it will work with and Lindgren says he turns away anyone who he does not consider ethical.

PayMe takes over the payment of the contractor and can look after superannuation, salary sacrificing and car leasing – and also provide insight and support with claiming back work related expenses and completing tax returns.

Says Lindgren; “We have a single fee of 3 per cent for payroll services– you might have one or two car leases and you don’t pay any more. Taxation services are paid on a flat scale starting at $280 for a tax return and more if a contractor has a Pty company.”

Had you asked Lindgren as a young boy what he wanted to be when he grew up – he wouldn’t have known contract management companies existed. Born in Wagga Wagga in NSW Lindgren from the age of 11 wanted to join the army.

Born into a farming family, the eldest of three children, Lindgren went to boarding school – Yanco Agricultural High School – at the age of 11 where he first got his taste of army cadets.

“I could never ever picture myself in another career from 11, 12 onwards,” he says, a vision which led him to the Officer Cadet School at Portsea, Victoria in 1981.

Lindgren says that like most people he didn’t understand the army until he was in it – or the various specialties that existed. Early on he identified that the engineering side of the army was where his interest lay.

“I became interested in the engineering component: laying minefields, building bridges, clearing minefields, assault demolitions and so on. “ Lindgren became an engineering officer which required lots of initiative and practicality.

So did computing – which was being introduced into the military in the early 1990s.

Lindgren had an aptitude for computing – but realised that the systems being deployed were inadequate – it could take four to six times as long to do something using a computer as it would to perform the same task manually.

Recognising his technological ability the army sent Lindgren back to Wagga Wagga – to Charles Sturt University - to study IT for a year, before joining the Signals Corp.

“I then utilised that skill in the army to ensure that business – army and defence - knew they owned information technology and didn’t operate independently. It is a business enabler and on the battlefield it’s a warfare enabler – but at the time that was not a view that was understood.”

After a stint working in Canberra Lindgren was sent off for a year to study for a Masters in Defence Studies at the Army Staff College at Queenscliff, Victoria, before being sent to Sydney to command a Signals Squadron.

“As in everything in the military it’s a family and I loved the leadership and having people work with me, not for me, but with me.”

By this time Lindgren has married and fathered two sons, but was sent to participate in a peacekeeping mission in the Middle East.

Based in Rome, but with fortnightly trips to the Middle East, Lindgren was the chief information officer for a multinational peacekeeping operation in the Sinai with troops stationed in Israel and Egypt.

His role was to bring the organisation into the 21st century – and change a regime where it was taking five carbon copies of documents to underpin every transaction, and could take months for logistics requests to be fulfilled.

Lindgren established network and implemented an SAP enterprise resources planning system that could be used by the 28 nationalities in three countries making up the peacekeeping force.

“It was pivotal to know that if an item had been ordered – for example tomato sauce for 1,800 people for two months. When I arrived orders like that could take 6-8 months to be filled so the stock levels people had were huge.”

The system was also used for less prosaic purposes.  “In the Sinai desert there are a significant number of mines and when you travel from point A to point B if you didn’t get there in a certain time people needed to be worried so we used the SAP system to identify when a vehicle left a particular location – and then you knew that it needed to get to the next checkpoint in 20 minutes and if it wasn’t there in 25 minutes to start being concerned.”

Lindgren said the information system and networks; “Really raised the capability of the whole force not just financially but logistically and operationally.”

In one year of operation Lindgren’s system was able to save $5 million a year from a $120 million operating budget.

Then it all went bung.

Somehow, during a routine trip to the Middle East, Lindgren ingested a parasite which led him to develop the chronic and highly debilitating condition Fibromyalgia which causes constant, chronic pain. Lindgren says that today – more than a decade after discharge - he routinely faces pain levels that hover around three or four out of a possible ten.

At that level he can function – but when the pain develops a tighter grip Lindgren has to take time out to rest.

He was understandably devastated. “For the first year I came back to Australia and I was promoted to Lieutenant Colonel and I tried to work. But I couldn’t work – and had to take eight months off work – I could barely wear a dressing gown because the touch of the cloth on my skin was so painful.  I sometimes couldn’t talk.

“It was a challenge to my personality – to walk out the door and stay positive.” He acknowledges that it has changed his life, his family life, and that he has had to structure PayMe so that his team can step into the breach whenever he needs to take time out.

While the condition is clearly debilitating Lindgren, who turns 50 this year, bears no sign of bitterness.

“I could sit back and contemplate my navel and say how bad life is but I choose to take a positive approach and work with it.”

He’s also determined that the PayMe brand will not suffer. By 2020 he wants the business to be a nationally recognised and respected brand, and has set a; “Big hairy audacious goal of achieving a net profit of $20 million by 2020. It’s a stretch target that we believe we will achieve.”

More in this category: « The once and future hack Sketching a blueprint for enterprise architects »
Share News tips for the iTWire Journalists? Your tip will be anonymous