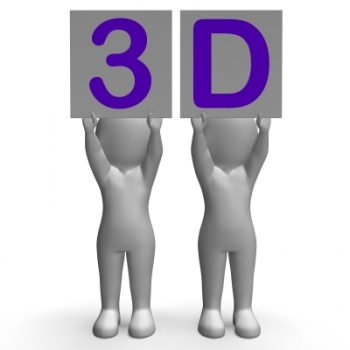 Worldwide use of 3D printers is exploding with shipments expected to more than double every year from 108,000 this year to 2.3 million shipments in 2018.

The two-million plus market forecast for 2018 is still only a fraction of the likely size of the consumer, business and government market for the printers.

The growth in 3D printer shipments is forecast by research group Gartner which says shipments next year alone will hit the 217,350 units mark.

According to Gartner, seven technologies constitute the 3D printer market, with material extrusion leading the market's growth through 2018 due to significant worldwide consumer adoption of 3D printers costing less than $1,000.

"As we noted last year, the 3D printer market is at an inflection point," said Pete Basiliere, research vice president at Gartner.

"Unit shipment growth rates for 3D printers, which languished in the low single and double digits per year throughout the 30 years since the first 3D printers were invented, are poised to increase dramatically beginning in 2015.

“As radical as the forecast numbers may seem, bear in mind that even the 2.3 million shipments that we forecast will be sold in 2018 are a small fraction of the total potential market of consumers, businesses and government organisations worldwide."

"New providers are entering the market, sometimes directly, sometimes through crowdfunding campaigns, on what seems like a daily basis. These providers are leveraging the expiration of early extrusion technology patents to make low-cost, low-priced devices targeted mainly at consumers."

Gartner says that end-user spending on 3D printers varies by technology and shipments, but other market forces also come into play, including material extrusion spending impacted by the high number of startup and small companies worldwide that are taking advantage of the low barrier to entry to sell consumer 3D printers for less than $500.

The research group questions whether these startups and small companies have sufficient revenue to cover not only their production and overhead costs but also service, sales, channel development, research and development, and says “owners' profit remains to be seen”. Conversely, providers of technologies such as directed-energy deposition and powder bed fusion will be able to hold prices as demand for their equipment rises, adding value in ways other than a costly price war in order to attract and retain enterprise buyers.

Basiliere says average selling prices (ASPs) also vary with technology and market forces - each market has different dynamics, including the mix of devices, prices and buyer requirements that drive the average for all 3D printers in a given technology.

"Manufacturers will strive to add features and improve performance in the first few years rather than reduce the prices of printers," Basiliere says.

"Therefore, the ASPs of a few technologies are expected to increase or to gradually decrease in the outer years after an increase in 2014 or 2015. Directed-energy deposition printers are the most highly priced, followed by powder bed fusion printers. The ASPs of material extrusion and vat photopolymerisation printers are expected to decrease as more and more players enter the market with offerings in the lower price bands within these two technologies."

As strong uses emerge within both the consumer and enterprise segments, Gartner expects the significant price band growth rate differences will fade as more organisations employ low-end and midrange printers for testing and experimenting.

"This trend will accelerate as the market consisting primarily of early adopters who grew up with an open-source approach without lock-ins evolves into a market in which average consumers dominate," said Basiliere.

"While the early adopters will rage at the perversion of the 3D printer open-source ethos, the vast majority of mainstream consumers will demand the simple and consistent operation that 'plug and print' can provide them."

Published in Print Solutions
Tagged under