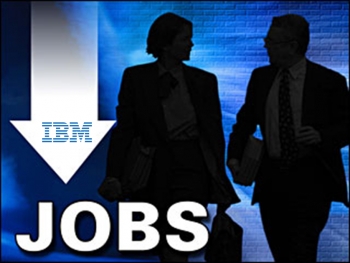 It used to be that a job at IBM was a job for life. No more. Now Big Blue is slashing jobs worldwide in an effort to cut expenses.

The cuts, which unions claim will reach 15,000 this year – on top of many more in previous years – are being felt most keenly in India, where IBM employees large numbers of workers. They come less than a month after IBM reported disappointing financial results for the 2013 fiscal year.

India’s Economic Times has magazine reported on the extent of ‘RAs’ (‘resource action’ an IBM euphemism for sacking) being experienced at IBM’s Systems and Technology Group (STG) Bangalore development centre.

"Several employees were called to a meeting and RA'd. They were asked to vacate premises immediately. Severance package was on an average three months basic component of salary, which is like six weeks full pay.

"People broke down after seeing the inhuman treatment. Laptops along with the cases were confiscated, so several employees were seen crying and exiting building carrying and balancing their personal belongings with their two hands.”

Instead of focusing on the people that made the company great, IBM is now transfixed by numbers and Earnings per Share (EPS),” said Conrad, writing on one of the many websites were sacked and threatened IBM workers unload their opinions of IBM and its work practices.

“In 2013, IBM spent US$1 billion on what it called ‘workforce rebalancing’, which means nothing else than a giant job cut. In 2014, the company is set to spend another US$1 billion to eliminate an estimated 15,000 jobs worldwide. This comes at a time when the company continues to make hefty profits.

“UNI Global Union and the UNI IBM Alliance denounce the company’s move to lay off its employees en masse. IBMers remain the company’s biggest asset, and should be in the forefront of any change. Alternatives to layoffs exist for companies looking to cut costs. Retraining programs can yield positive results for both employees and the company, and have been implemented successfully in numerous companies.

“The hits just keep coming. Following the news that job cuts will happen this quarter, the latest is that IBM will sell one of its server units to Chinese company Lenovo. 7500 workers worldwide will be impacted and moved out of IBM”.

Conrad also said that nearly 2000 job cuts are being planned in Europe.

Alan Tate, head of union UNI ICTS, said: “IBM needs to go back to its roots and focus on what made the company successful for over a hundred years. It needs to invests in its employees and ensure decent work. Innovation is what made IBM a great company, not greed.”

Graeme Philipson sadly passed away in Jan 2021 and a much valued senior associate editor at iTWire. He was one of Australia’s longest serving and most experienced IT journalists. He is the author of the only definitive history of the Australian IT industry, ‘A Vision Splendid: The History of Australian Computing.’

He was in the high tech industry for more than 30 years, most of that time as a market researcher, analyst and journalist. He was founding editor of MIS magazine, and is a former editor of Computerworld Australia. He was a research director for Gartner Asia Pacific and research manager for the Yankee Group Australia. He was a long time weekly IT columnist in The Age and The Sydney Morning Herald, and is a recipient of the Kester Award for lifetime achievement in IT journalism.

Graeme will be sadly missed by the iTWire Family, Readers, Customers and PR firms.

More in this category: « Ex HP executive to lead A10 Networks in ANZ region Sensis bloodbath – 800 jobs to go »
Share News tips for the iTWire Journalists? Your tip will be anonymous