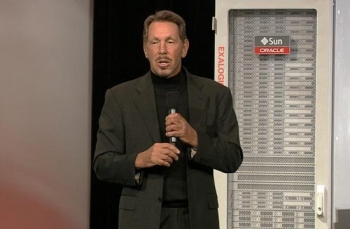 Oracle co-founder Larry Ellison has stepped aside from the role of CEO, which he has held since 1977.

Oracle now has two chief executive officers - not co-CEOs, mind you - with the appointment of both Safra Catz and Mark Hurd as CEO.

Co-founder and former CEO Larry Ellison has taken on the roles of chief technology officer and executive chairman of the board.

"Safra and Mark will now report to the Oracle Board rather than to me," said Mr Ellison.

Software and hardware engineering functions will continue to report to Mr Ellison.

"All the other reporting relationships will remain unchanged," said Mr Ellison.

"Keeping this management team in place has always been a top priority of mine."

Apparently staving off any suggestions that Mr Ellison may be winding down towards retirement (he turned 70 last month), Oracle board presiding director Michael Boskin said "Larry has made it very clear that he wants to keep working full time and focus his energy on product engineering, technology development and strategy."

Dr Boskin added "The Directors are thrilled that the best senior executive team in the industry will continue to move the company forward into a bright future."

Oracle's success - plus investments in other companies including Salesforce.com and NetSuite - has made Larry Ellison one of the world's wealthiest people.

But in an open letter, he wrote "Many years ago, I put virtually all of my assets into a trust with the intent of giving away at least 95% of my wealth to charitable causes. I have already given hundreds of millions of dollars to medical research and education, and I will give billions more over time."