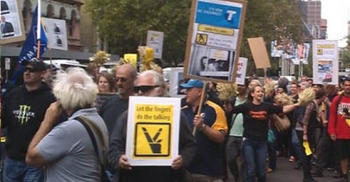 Telstra will reduce its workforce by around 1100 positions by June 2014 as a result of the restructure it announced in May. More than 500 jobs go immediately.

When first announcing the restructure in May. Riley said there would be ‘impacts’ on jobs. Now we are seeing the extent of them. Telstra is changing, and the structure of its workforce is changing with it. NAS and international operations are becoming much more important, while the traditional business, where most of the cuts will occur, is declining.

The proposed reduction equates to approximately 6% of Telstra’s local operations workforce, and about 3% of the company’s total workforce of around 30,000. The company had over 75,000 employees at its peak in the 1980s – the restructuring will never end.

“Always when there are implications for people’s jobs it is difficult and this is no exception. We will work through a careful consultation process with our people and we will do so with the utmost respect and sensitivity,” he said.

Riley said the layoffs will be partially countered by the “large number” of roles the company would add to service some of its large NAS contracts. He singled out the recent deal with the Department of Defence, which he said would add up to 400 new roles.

Telstra announced immediate cuts of 500 jobs to staff yesterday, via email. In a statement it described them as:

Cold comfort for the staff affected – a job cut is a job cut, especially if it’s your own. Community and Public Sector Union (CPSU) spokesperson Teresa Davison s said she was shocked at a decision.

“It’s a slap in the face for Telstra workers. It's really demoralising for them. Telstra has made more than $3 billion in net profit every year for the past five years. Those profits are the result of the hard work of staff and it's hardly a fair reward to have 1100 jobs cut.

"Since January this year, more than 2,000 staff have been made redundant from Telstra and its subsidiary, Sensis," she said, pointing out that Riley’s annual remuneration package was $2.8 million.

She said union representatives will meet with Telstra management today to ask the company to reverse its decision. "We don't believe it makes good business sense to get rid of highly skilled and loyal staff, particularly when Telstra is struggling to fill jobs in other areas including for large contracts such as Defence.”

Trouble is, a linesman can’t be immediately re-employed as an outsourcing project manager.

Davison said earlier announcements by Telstra about the proposed restructure had foreshadowed further offshoring of Telstra jobs. “We still don't know the extent to which these 1100 jobs are going offshore. What we do know is that Telstra has never had more offshore workers and the number has been steadily increasing.

"It's a kick in the guts for Australian workers and customers whose loyalty to Telstra is the foundation of the company's profitability. Our first priority is supporting affected members. We expect Telstra to honour all staff entitlements and provide opportunities for affected staff to apply for other job vacancies within Telstra.”

The Communications Electrical Plumbing Union (CEPU) has made similar comments. National Secretary Shane Murphy said: ‘‘This initial announcement is just the tip of the iceberg. We expect that this is the first round in a number of cuts to be announced between now and the end of the financial year.”

But Telstra is not likely to be moved by the unions’ arguments. Riley says the cuts are part of a continuing realignment. “As the changes flow through the operations team we are finding many examples where we could work better together in a more streamlined and productive way.

“Telstra is a changing business in a changing industry. We are seeing reductions of roles in declining businesses, due to evolving technologies and the restructuring of our industry, and growth in other areas such as NAS.”

More in this category: « Jobseeker mobility, confidence takes a battering WatchGuard's new man in New Zealand »
Share News tips for the iTWire Journalists? Your tip will be anonymous