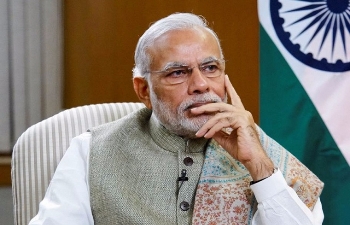 During a phone call with his Australian counterpart, Malcolm Turnbull, Modi expressed his worry about the impact the changes would have on skilled Indian professionals who take up employment in Australia, according to The Times of India. Turnbull initiated the phone call.

Turnbull announced the abolition of the 457 class on 17 April, 21 years after it was introduced by another Coalition leader, John Howard. He said it would be replaced by another system, known as Temporary Skill Shortage visas.

The 457 visa allowed a worker to stay for four years and apply for permanent residence after two years. The TSS visas are of two kinds: two years and four years, with the latter only granted to those whose profession is on Australia's medium and long-term strategic skilled list. An application for permanent residence can be lodged after three years.

The Indian government said a day after the announcement that it would examine the new visa system in the context of bilateral free trade talks. The two countries are yet to finalise a free trade agreement despite several rounds of talks.

Indians are by far the majority of workers in Australia on 457 visas, with a quarter of the number being from that country. The UK and China are next, with 19.5% and 5.8% respectively.

Shadow foreign minister Penny Wong told The Times of India that Australia only wanted to restructure the visa programme and giving preference to Australian workers was a logical outcome.

"Australia is now offering two different visas with slightly different criteria," Wong said. She added that having a greater focus on highly skilled workers with a good command of English was fair.

"It would seem to us that India is well placed to take advantage of those new categories,'' Wong told the TOI.

"I can only outline what the facts are. I would also say that as a matter of principle ensuring that we can fill up vacancies with Australian workers who are able to do the job is not a controversial proposition but a logical proposition. It doesn't mean that we don't see value in skilled migration for skill shortages," she said.

Wong also said the issue had been an Australian concern for a while. "It has been a matter of overall policy focus about how to get the balance right... between making sure we train young Australians for available jobs and at the same time having a properly focused, sensible skilled temporary migration programme," she said.

More in this category: « IT workers to sue after being replaced by H-1B holders Fairfax Media to sack 125 journalists »
Share News tips for the iTWire Journalists? Your tip will be anonymous