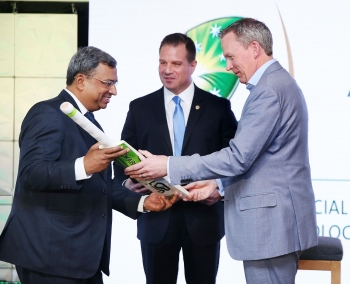 Cricket Australia has announced a new four-year deal with HCL Technology to provide an integrated technology solution for the benefit of fans around the world, replacing global services company Accenture in the role.

Asked what fans might see in the "now", "soon" and "future" timeframes as a result of the change, both Mike Osborne, CA's general manager of Technology, and Michael Horton, HCL's country manager for Australia and New Zealand, indicated the first task to be achieved (and one that was already underway) was to move all existing operations to the HCL platforms.

Horton also noted that, "The aim is that the experience for individuals, whether a fan or a player or whatever is personalised. The players, the coaches will have their personal details [so they can] build up their own analytics. At the moment it is more like a web site, and it's going to go from a website, which is not personal, to a personalised experience.”

When iTWire queried whether this would be something like a LinkedIn for cricket, Horton responded: "True, although in my own mind I've been thinking of it as very similar to online banking applications where you have access to all the collateral that the bank wants you to have, but it's also personalised to your account.”

Osborne added, "In the medium and longer term, Cricket Australia has done a really good job of building assets or capabilities one-by-one. A live app, cricket.com.au, various different properties for participation and teaching coaches and umpires. But they're all separate. Our ambition is to end that, pull them all together so that the fan or the participant [benefits] – they're at the centre of this and we orchestrate around them with the digital capabilities they need to engage with cricket, however they choose to.”

He added: "Fast forward a while, to use my own example, I'm a dad of two girls who play entry-level cricket, [and] are members of the Stars, I personally use the sites. The future experience we'd like to deliver to that fan — we know you're coming to the T20 International at the MCG, we know you're a Stars fan, we know a Stars player is playing — we can deliver that information to you and help connect you to the stuff you care about. Without putting the right infrastructure and platforms together, we just can't do that right now.”

Asked about the duration of the contract, Osborne immediately said it was for four years, with every expectation of continuing after that. Horton was less forthcoming, noting that he believed that information had not been made public, but, like Osborne, believed that the partnership would be expected to run for a significant period of time.

Regarding the number of staff who would work on this project, Horton suggested that CA would be treated in the same manner as any mid-sized account, with a mix of people in Australia, along with a team in India and digital and analytics people in the US, looking after the project. Osborne said he was expecting about 100 people to be involved.

When pressed as to the "political structure", both were very keen to describe the project as a partnership, not as any kind of hand-off to HCL.

Asked what the "big, hairy, audacious goal” was, Horton said he he had that between 1.75 billion and 2.5  billion people globally had an interest in cricket. "How many of those can we reach through Cricket Australia?” he queried.

"Many, say, Indian culture people who have migrated here to Australia, even over recent years, and their children are now playing cricket here. And if they start putting their personalised achievements into the website, the grandparents and extended family back in India are all going to [see this information]. So the potential flow through Cricket Australia is massive.”

Osborne took a similar view, focusing on participation. "The more boys and girls we can get playing the game, [that] is what inspires me the most."

More in this category: « US holds out H-1B visa threat if India demands local data storage US charges four men with H-1B visa fraud »
Share News tips for the iTWire Journalists? Your tip will be anonymous