John Ferlito doesn't like to be called a nerd. He prefers to be referred to as a geek - though judging from his photo, he looks just like one of the many youthful businessmen in the tech community.


One thing that sets him clearly apart is that he has an amazing array of accomplishments and is extremely modest about what he has done.

The presidency of Linux Australia fell his way recently in rather unusual circumstances when the man holding the job, James Turnbull, decided to accept a billet in the United States.

Ferlito was not next in line, Lindsay Holmswood, the vice-president was. But he opted out due to the impending arrival of an addition to his family. Ferlito put up his hand, and the rest, as they say, is history. 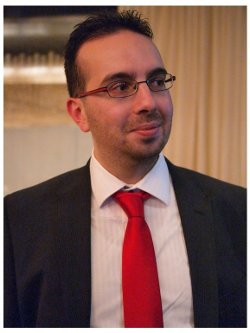 Ferlito has his fingers in many technical pies, something he says runs in the family.

"My parents have been a very large influence in my life. Since I was three they have always run a business of some sort and I always helped out," he told iTWire in an interview.

"It is this influence which has driven me to become an entrepreneur. At last count I'm up to my fifth start-up and need to actively stop myself from taking more on."


Ferlito was a geeky kid, "always pulling toys apart and rarely putting them back together. Dad was probably the main influence here. He was an electronics engineer by trade so there were always many visits to Jaycar and building various kits".

At the moment, Ferlito is the president of Robot Parade, which provides open source solutions, the CTO of Vquence, which deals in social video intelligence and metrics, and a systems consultant at Bulletproof Networks, a managed services provider.

Of himself, he says: "I'm not really a developer. I've always maintained a broad skillset. I suppose you would say at heart I'm a sysadmin but I'm just as proficient in networks and development when I need to be. It is this well-rounded skill set that means I can tackle almost any problem."

His term of office ends in early February 2011 when the next set of office-bearers will be voted in at the annual Australian national Linux conference, otherwise known as LCA. The conference is scheduled to be held in Brisbane.
Ferlito says he would like to run for another term. "One of the things I'd like to address is in terms of LCA. I'd like to start seeing it done smarter," he says.

"There is still too much re-inventing the wheel from year to year because we don't do enough to pass on the body of knowledge that is accumulated by each team. We'll be trying to rectify this in 2012 by providing more support in terms of Sponsorship and Media teams as well as having an LA-based wiki for LCA.

"Being run by volunteers it is always difficult to achieve all the goals you set out for the organisation, simply due to not being able to give it enough time. I will definitely be re-contesting next year, there is still a lot left to do and I'd like to try and get it done."

Ferlito has done a lot business-wise in his 32 years; when asked for his personal favourite, he opts for Bulletproof Networks. "I founded that business almost 10 years ago with three other friends, and in that time we have managed to turn it into on of Australia's best mission-critical hosting businesses."

Like many FOSS people, he finds himself doing something that he likes. "I find myself in the fortunate (position) that what I do for work is one of my hobbies. So you can put FOSS, Entrepreneurship and software development into that bucket. When I'm not doing technical stuff you'll find me in the never-ending cycle of renovating a house."

Ferlito is affianced to Silvia Pfeiffer, a well-known developer. "She is heavily involved in the video space having started the Annodex Association a number of years ago and is currently an invited expert to the w3C on a number of standard bodies around video and accessibility," he says.

"She is also currently writing a book on HTML5 Video. She does much more awesome stuff than I do."

More in this category: « If VMware buys Novell, what happens to the Microsoft deal? Mandriva fork Mageia is born »
Share News tips for the iTWire Journalists? Your tip will be anonymous