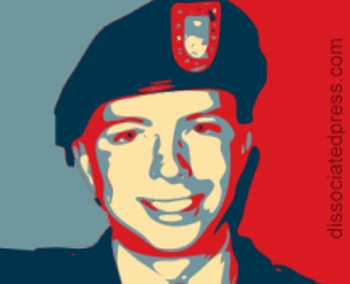 When governments become punch-drunk with power and abuse the authority they have been given by the people, it is the duty of the fourth estate in a democracy and patriotic citizens to hold their feet to the fire. That is all Bradley Manning has done, but instead of being honoured, he is being locked up for life.

But for Manning's part in leaking information about the cold-blooded killing of civilians and journalists in Baghdad, he is likely to be locked up for the rest of his life.

For decades, the US government has abused the power it has. It is not just in recent times that Uncle Sam has run amok. The last time an US citizen was charged under the outdated 1917 Espionage Act was when Daniel Ellsberg leaked the Pentagon Papers to the New York Times in 1971.

On that occasion, due to the manner in which Nixon administration officials tried to meddle with things, Ellsberg was acquitted.

Manning has not had any such circumstances to cite in his favour. A man of courage and integrity, he was betrayed by, of all people, a hacker named Adrian Lamo, who is a disgrace to others of his ilk. Lamo is the face of misplaced patriotism.

Would the world have known about the perfidy of the National Security Agency in spying on all and sundry if it had not been for a brave man named Edward Snowden? Would Australia have been apprised of its shameful agreement to invade Iraq alongside the US and others based on false evidence were it not for a courageous soul named Andrew Wilkie?

The reason why we need more and more of these people in society is because journalists do not do their jobs. In the US, the mainstream press is by and large a cheerleader for the government. Why have NYT journalists like Mark Mazzetti even snitched to the CIA about their own colleagues!

Manning is a small man physically. He looks like a kid who is running scared from a storm. Yet he has done more for our generation as a harbinger of the truth than all those pundits who bay themselves hoarse on network television. We should be celebrating what he has done.

The US has for ages thought that it could go into any country, murder people willy-nilly, and then hide the facts under the blanket of national security. After the trade centre towers were brought down in September 2001, there has been a bigger incident with which to frighten the masses - Osama is coming.

And, all along, you hear the weasel words: trust us, we know what's best for you.

This is the country that refers to itself as the land of the free and the home of the brave. Not any more. Yes, there are solitary brave souls like Manning who act in an ethical manner in the wider public interest.

But for the main part there are toadies and cowards in positions of power and responsibility (?), led first and foremost by Barack Obama himself, who try to justify overwhelming surveillance, the illegal killings of people by drones, as part of regular business to maintain what they claim is a civilised, western democracy.

If this is the hallmark of a civilised society, I would prefer to go back to the jungle.

More in this category: « High prices? Just stop using the software Ballmer's departure is far too late »
Share News tips for the iTWire Journalists? Your tip will be anonymous