The Wire gets entangled in its own breathless reporting Featured 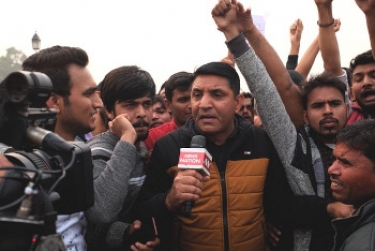 Image by Mikhail Mamontov from Pixabay

Indian news portal The Wire has filed a complaint against one of its own reporters over a story that claimed Facebook parent Meta was allowing a member of the ruling party to censor social media posts. It was alleged that the journalist had allegedly fabricated documents for the story.

The case against Devesh Kumar was filed with the Delhi Police's Economic Offences Wing a day after the cops themselves filed a first investigation report against the portal, the Indian Express reported on Sunday.

It is somewhat strange when a journalistic organisation does not stand behind its own reporting, preferring instead to hang a reporter out to dry.

India has been ruled since 2014 by the Bharatiya Janata Party, not exactly a political entity that believes in a free press.

Last year, Amnesty International said of the country, which is claimed to the world's biggest democracy: "The authorities used repressive laws to silence critics by curbing freedom of expression both offline and online.

Thus it came as no surprise that Amit Malviya, a ruling party member who was said to have censored posts on Facebook, filed a complaint against four staffers of The Wire: founder Siddharth Vardarajan, and editors Siddharth Bhatia, M.K. Venu and Jahnavi Sen.

The complaint was filed under several sections of the Indian Penal Code, one of the great bureaucratic leftovers of the British Raj expanded no end by India: 420 (cheating), 468 (forgery with the purpose of cheating), 469 (forgery for harming reputation), 471 (using forged document), 500 (defamation), 120B (criminal conspiracy) and 34 (common intention).

The Wire issued a rather strange statement: “Journalists rely on sources for stories and do their best to verify the material they receive. Technological evidence is more complicated and the usual due diligence may not always reveal the fraud perpetrated upon a publication.

"This is what happened to us. In the life of any publication, an occasion may come when it is misinformed… Whether the person who brought all the material to The Wire deceived us at anyone else’s behest or acted on his own is a matter that will be subjected to judicial process in due course. The malintent to discredit The Wire is obvious.”

The initial report claimed Malviya had been given special privileges by Facebook through its XCheck program allowing him to take down any posts that were critical of the BJP. The report was claimed to be based on material supplied by an insider at Meta.

It went a bit deeper than that after Meta called the source document a fake. The Wire then ran a number of stories citing so-called "internal emails" from Meta all of which turned out to be fakes.

Only after that did The Wire retract the story and offer a mea culpa to its readers.

A personal perspective: reporting in India is fraught with danger as individuals and organisations file lawsuits at the drop of a hat. This writer was hit with a lawsuit back in 1983 after revealing a scam by a travel agency that was promising to send people to the Persian Gulf for jobs.

Fortunately, the very day after the suit was filed, the company owner was arrested on a complaint of fraud. His case, thus, broke down.

Things are a hundred times worse now and a majority of the media indulge in cash-for-comment with no shame at all. Anyone who files something that is not liked by a company or a politician has to tread with extreme care.

More in this category: « Vic polls reason for licence issue as Optus kicks can down the road With nuke-capable B-52s coming, Albanese is now the new deputy sheriff »
Share News tips for the iTWire Journalists? Your tip will be anonymous