Richard Stallman, warts and all

One thing that can be said with certainty about Richard Matthew Stallman is that, at 57, nearly 27 years after he resolved to create a free computer operating system, he remains as stormy a petrel as ever.

RMS is in Australia for the next six weeks to give a series of talks, chief among them being an address to the World Computer Congress in Brisbane next week.

He is busy attending to his email on his little Lemote netbook when I enter the room at the Australian Computer Society in Melbourne. Inquiries about the hardware he's using yield a predictable answer – he uses the Lemote because the BIOS is open.

The six weeks in Australia, he tells me, will give him some time away from his regular hectic schedule, enable him to catch up his mail and other writing and also spend time with his partner, Doris.

He's still very much the geek, sporting a T-shirt and continuing to chomp on his breakfast — steamed cucumber and zucchini as best I can make out — as we speak. 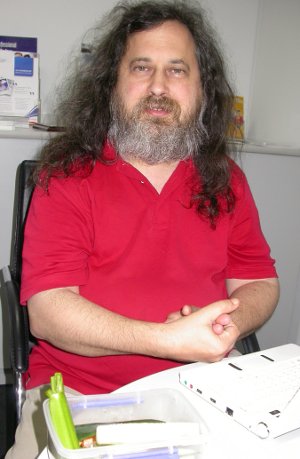 Stallman has been described to me by various people as intractable, annoying, steadfast, highly ethical and motivated. He is all these and more; he has very firm ideas and he is not about to change.

One area where he admits he did change was one of his speech routines. This happened after the ruckus at last year's GNOME summit, when he was accused of being sexist due to some of the language in the St Ignucius comic routine that he does as part of his regular talk about free software.

Stallman says he came under attack because people, to some extent, want to attack the free software agenda. However, he has modified some of the wording in the routine to ensure that it cannot be misinterpreted.

He spent the last 11 days in India, speaking to various audiences, and is greatly encouraged by the progress towards free software in that country.

Two years ago, he met representatives of the Indian Central Board of Secondary Education and they have agreed to change the information processing curriculum to free software away from proprietary software like that from Microsoft and Oracle.

The information technology curriculum still has to be moved, but Stallman has hope in that direction too.

When we start talking about free software and open source, it becomes quite clear that this is an ideological divide that will never be bridged. He describes the message of open source as "amoral", later pointing out that the main reason why the US does not make progress in the use of free software is because the resistance to the agenda of the mega-corporations has been more or less completely marginalised.

"The idea that users deserve freedom is something that the major newspapers and magazines won't talk about," he says. "If they ever talk about our software, they call it open source, they don't mention free software. And also they call the GNU system Linux.

"Occasionally they will mention my name.. if they do, they mention my work and say it's Linux and it's open source. They give a wrong idea of what we stand for."

In contrast, he says there is a lot of talk about free software in South America, to some extent because there are some governments in the region which oppose the agenda of the mega-corporations. "But there are some US puppets – Colombia, Peru, and, in some sense, maybe Chile."

He wants the means to justify the end – open source should also stress the message of freedom, he says. If it does not, then people will not say no when someone offers them a practical reason to surrender their freedom. "I'm fighting for freedom, I'm not looking for a middle road."

People should use free software because it confers freedom on them, else they will move away when it becomes inconvenient, he stresses.

Stallman points to the progress in South America – countries like Venezuela and Ecuador have made giant strides towards using free software through official mandate, and Brazil, while having no official mandate, has made plenty of progress nevertheless. In Argentina, some states have laws that state agencies have to use free software.

He doesn't like to discuss hypotheticals – when I put it to him that there may be a situation where a person has no choice but to use proprietary software at his job, he says he's not sure that such a situation exists. His remedy is extreme –"if I were you, I would quit."

When I point out that this same person may also be poor, he says that a person who is poor would not be in such a job in the first place. I get the feeling that he is a person who has a very firmly constructed worldview outside which nothing really exists or matters. When the discussion vends its way into abstract things, he quickly refuses to buy in.

Stallman gives his own example – in 1983, he walked out of a very highly paid job, driven by  idealism to create a free operating system. He points out that there were many programmers as talented as him; the only thing unique about him was his determination to have freedom; "that was rarer than being a good programmer".

Another thing that strikes me about Stallman is that he is content to let things take their own course – chiefly because, he says, most of what happens in the world that affects free software is not controlled by his Free Software Foundation. Big corporations control the agenda for the most part and he says he just tries to combat threats to freedom as best he can.

He says that when he set up the GNU Project in 1983, his only objective was to create a free operating system. Now, he says, the goal is for all software to be free – a grandiose goal, perhaps, but an admirable one.

Stallman has always been miffed that people refuse to give him credit for the GNU/Linux phenomenon and this is something he brings up more than once as we talk.  When I ask what Linux distribution he runs on his netbook, he appeals to me to say GNU/Linux instead. He uses gNewSense, the only fully free GNU/Linux distribution.

It reminds me of what Steve Wozniak, the creator of the Apple I and II, did in 2006 – he wrote a book called iWoz at the time when Steve Jobs was increasingly being seen as the only person responsible for Apple Computer. It looked very much like Woz wanted to remind people that he was the man behind the original company, not Jobs.

Asked whether there are things he wishes he could have done differently since he made his move in 1983, Stallman admits there were quite a few. As an example, he cites the lack of attention he paid to the development of the open source concept by Bruce Perens of the Debian GNU/Linux project – the redefining of free software, as Stallman puts it.

I mention the campaigns launched by the Free Software Foundation, like that against Windows 7, and ask him how the effectiveness of such campaigns are measured. He appears somewhat bemused, saying "how can we possibly do that?" With this, as with several other questions about the FSF's plans, he points to the lack of resources as the one hurdle standing in the way of systematic planning and strategy.

Stallman is clearly not interested in gauging how effective his talks in various countries are — "what use would that be to me?" — but he does admit that if he sees a distinct lack of interest in some country or the other, he may well avoid going there again.

As I get up to go, he wishes me "happy hacking." It's almost noon, but he still has bits of his breakfast remaining to be consumed.

More in this category: « What is Lundy doing at Software Freedom Day? Linux developer in solo bid to enforce GPL »
Share News tips for the iTWire Journalists? Your tip will be anonymous