Bruce Perens looks a bit disoriented as he comes into the hotel lobby, looking for me. "Anyone here called Sam?" he calls out. The tiredness is evident on his face after the long haul from the US to Australia.


Moments before that I have looked around and, noticing a man pushing what looks like a luggage trolley, turned back to my magazine again as I wait for him to arrive. But then that happens to be Perens, returning the trolley without waiting for the hotel staff to do it for him. There's an air of having done this a million times before as he shakes my hand and we make our way through the lobby, looking for a quiet place to talk.

The primary author of the Open Source Definition, Perens was in Melbourne today en route to Ballarat to attend the 13th Australian national Linux conference where he will be delivering the first keynote on Tuesday. The conference begins on Monday.

About a decade ago, many of the luminaries of the free and open source movement gave animated accounts about the rise of the genre in a film called Revolution OS.

Perens was one among them. There was fire in his eyes, and the passion was evident as he - along with Free Software Foundation founder Richard Stallman, Linux creator Linus Torvalds, primary Apache developer Brian Behlendorf, and others -  held forth about something which was obviously very dear to his heart. 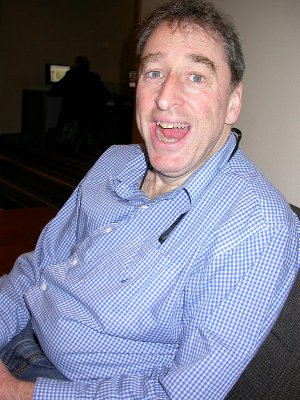 The enthusiasm is still there in 2012. Perens is wiser, older - "I don't have so much hair now," he laughs - but open source is still very much what drives him.

Perens talks freely and with authority about FOSS. But then he has been around for something like 20 years in these circles. "The same tension as existed then between the open source and proprietary genres exists today," he says. "We want to work together with them, we want to build open source software with them. The question is whether we are giving them too much and whether they are giving enough back."

At the LCA, his keynote will be on open hardware, what he calls the second revolution of open source. "Open hardware means sharing the design of physical or electronic objects similar to open source software," he says.

According to his own publication, the Open Hardware Journal, the first issue of which came out in November, the right to use, modify, redistribute, and manufacture, commercially or as a non-profit, is granted to everyone without any royalty or fee. "Thus, Open Hardware designers hope to enrich society by developing a library of designs for useful objects that everyone can make, use, and improve," the magazine says.

Most open hardware is under licences similar to the BSD licence but Perens hopes to bring in a GPL-like licence too. He says open hardware is very useful in satellites which are considered munitions and thus cannot be exported from the US unless they use open sourced components.

Perens has been known to make statements that do not go down well with other FOSS people and is willing to bear the backlash of his opinions. "I don't mind being considered as someone dangerous," he says. "I am pushing new ideas, things that may make people feel threatened. And I am not going to stop."

Ubuntu, to him, does not matter. "I'm not sure that they have the long-term future that they think they do," he says. Ubuntu founder Mark Shuttleworth offered him a job before the company that creates the distribution, Canonical, was set up, but "his style wasn't what I wanted to do."

In fact, he adds, free and open source software has penetrated so much into business and elsewhere that no one company matters, not even Red Hat, the most successful Linux business.

The fact that there is a lack of transparency in a company like Red Hat irks him. Sometime back, he highlighted the fact that Red Hat had quietly worked out a patent settlement and not revealed the details. "Having such agreements sealed is bad for the public. Transparency would help, especially when it comes to patents," he says.

Perens explains that patents are often waved as a threat by people who have no entitlement to do so; the companies which are targeted pay up, because it is cheaper to do so. "In many cases, the entity making the threat has no leg to stand on," he says.

The situation is not helped by the creation of bad laws like the DMCA and now the SOPA. "If we don't fight hard enough, we will lose our freedom," Perens says, adding that he is tempted to run for political office because of developments like this. But then the fact that he wants to have a life keeps him from doing so.

Perens points to the case of Ubuntu where 75 per cent of the software comes from Debian. People are habituated to look to companies, he adds.

"I don't think there is a conflict of interest if someone from an open source project is promoting his or her own project. I would like to see more of this from projects," he says.

"Open source fans have to be honest - if we don't use the tools that everyone else is using and we lose out, then we are fools. I believe in self-promotion - as I say on my website, I've found that I can get politicians, corporate officers, and other folks to take my phone calls and accept appointments with me because they've heard of me. Being well-known means that I can get people to listen who might otherwise not have the time. That's important."

He agrees that open source people are not the best when it comes to dealing with the media. "A lot of us are nerds, we would rather be programming," he says. "Some of us are low in social development, that's just the way people are."

Unlike many other FOSS community people who regularly criticise Stallman, Perens says the Free Software Foundation is very important. "I have tremendous respect and affection for Stallman but he is the hardest person in the world to be friends with," he says.

"Nobody else has given his entire life to this cause. I must honour him for that if nothing else. I understand that he cannot reach everyone. I'm not sure if he is comfortable with the way I talk to people but I feel that I build a bridge when he cannot."

Perens is involved in research with David Rowe, the man who devised the Village Telco. The pair are working on a new voice codec which is open source. He has many more strings to his bow - the Covenant is a dual-licensing scheme that he has thought up and which the company Lexis Nexis used when they open sourced HPCC, the parallel software they use for handling extremely large data files.

He is a well-known public speaker - though he does not take up engagements unless he is paid, the LCA being an exception because it is a non-profit.

Perens also has a consulting business and is now pushing a business plan to develop a software-defined radio where all the components are built in software. He is just getting back to full-time work after having spent the last 10 years more involved in parenting his 11-year-old son Stanley, along with his wife Valerie. Family is the centre of his life now.
Read 8406 times

More in this category: « Windows 8 will lock out GNU/Linux on ARM devices LCA code of conduct: devil is in the detail »
Share News tips for the iTWire Journalists? Your tip will be anonymous