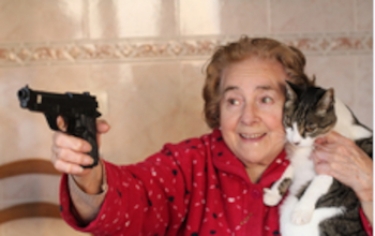 I kid you not. No other operating system suffers ransomware attacks, though helpful security experts try to spread the burden a bit, and suck up to the big M, by claiming they have seen similar malware for Linux and the Mac.

But no attack in which a ransom has been demanded and a company put out of operation for a while has involved anything other than Windows.

This kind of money making is in keeping with Microsoft's culture; the one thing the company possesses in spades is chutzpah. It is absolutely brazen in its bid to make money off something which its own products allow to happen.

That was the culture propagated by its co-founder Bill Gates and it has never gone away. Not that any serious effort has been made to change it over the company's 47 years of operation.

The American television network CNBC filed a report about this new method of raising money on Monday. You can see the details here, dear reader; I do not intend to give this company any more mileage on this score than it has already received.

For some time now, the Redmond-based company has been trying to divert attention from its abysmal security record by putting out so-called "studies" to claim that it has security credentials.

No online or print publication dares to point out the fact that Microsoft is now providing cures for diseases that it itself incubates and facilitates.

Microsoft is far too powerful for that kind of confrontation and most journalists in the US are more into stenography than actual reporting.

I never hesitate to hold Microsoft's feet to the fire, but then it does get a bit repetitive; the company has no shame and its bigwigs keep repeating the same shibboleths over and over again.

Occasionally, I drag myself out and point out the more egregious claims, as when the company issued a long write-up about flaws that allowed escalation of privilege on Linux systems without mentioning that none of these flaws could be exploited remotely.

But then this business of Microsoft providing a product to fight its own disease is not entirely new. Many years ago, the company announced that it would be supplying a program, now known as Windows Defender, to guard against malware.

At that time, there was talk of a lawsuit to prevent this as it was argued, correctly, that Windows was the reason why most malware was able to infect systems.

But nobody had the cojones to carry through on that threat. What has happened now is a repeat, with the only difference being that people will actually have to pay to get help with something which they could well avoid if they stopped using Windows.

That, however, would require a measure of common sense, something which has become really uncommon these days. I wouldn't hold my breath waiting for anyone to take that route.

More in this category: « Nine's leaders' debate just a badly organised shouting match
Share News tips for the iTWire Journalists? Your tip will be anonymous