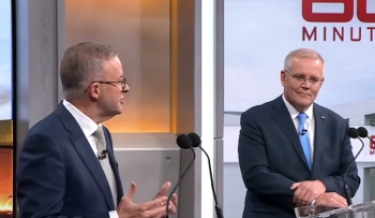 By the end of the roughly 75-minute affair, one was left wondering whether this was all the outfit could organise. Nobody was left covered in any glory, least of all the company hosting what turned out to be, for the most part, a shouting match. It was a terrible debate, just a waste of time. It was anything but great.

Watch till the end

Online voting is about the most unreliable way of gauging the winner or loser of any contest. Yet, Nine chose to have an online poll to decide the winner, which obviously had been put up in one hell of a hurry. One just couldn't vote using the poll, for a good part of the debate.

As can be seen from the video in this article, the number of votes kept changing. Despite the fact that Nine is heavily biased towards the government, this was no conspiracy; it was a major stuff-up.

There is no point in having grown men shouting at each other during a debate, with a moderator who adds to the confusion by trying to shout over them and get them to shut up. Add to that the fact that this debate was held in week five of a six-week debate; it had to provide something out of the ordinary to hold a viewer's attention.

I think we can all agree that Channel 9 should never ever host a debate again.

If only we had a national broadcaster to treat this process with some respect and professionalism.

Hang your head in shame Channel 9. This is appalling. #leadersdebate

It also does not help if questions are asked by a panel which is clearly not prepared to drill in and hold the feet of the two men contesting the debate to the fire.

Of the three panellists, only Deborah Knight showed some spirit and tried to break through the conventional bland, insipid questioning that has been on display for four weeks.

Ok this Nine Entertainment voting thing is officially a rort.

I tried 20 times to click “Labor” and then “Albanese” for PM. It would not let me.

But the first time I clicked “Coalition” and “Morrison” it accepted it. Total rort and joke. Nine should apologise. #auspol pic.twitter.com/oSY2idO4Hb

It was really a very lazy display by Nine and should disqualify it from holding any future election debates.

More in this category: « ABC unlikely to decide news presenter's fate before election is done No kidding, Microsoft now charges firms to tackle Windows ransomware »
Share News tips for the iTWire Journalists? Your tip will be anonymous