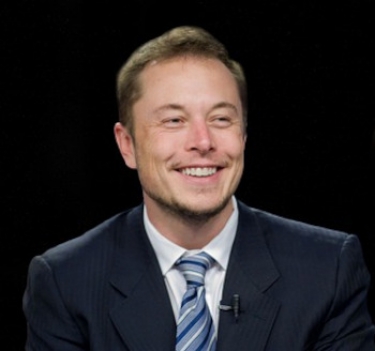 Elon Musk: his money is the same colour as that of all billionaires. Image by Tumisu, please consider ☕ Thank you! ? from Pixabay

Trump is a loose cannon. But then he has as much right to tweet out what he wants, provided that it adheres to the rules of the platform.

The degree of hypocrisy around opposition to Musk can be seen in the fact that nobody has any objection to Jeff Bezos owning the Washington Post – which, incidentally, has been one of the more vociferous voices opposing Musk's Twitter bid.

Neither have these virtuosos anything to say about Mark Zuckerberg and his ownership of both Facebook and Instagram, platforms which have spewed more wrong information in their existence than has been spread for the whole of the 20th century. And what about Rupert Murdoch and all the havoc he has casued around the world through his various media organs?

And as for Sergei Brin and Larry Page, who have presided over Google and YouTube, and all the censorship seen on those two platforms? Why, that is all good because it is part of the mainstream.

How about eBay owner Pierre Omidyar and his funding of The Intercept? And before one forgets, one has never heard any objections to Bill Gates, the co-founder of Microsoft, who forced upon the world a mediocre computer operating system known as Windows, one that has caused more woe for the world than even COVID-19.

US President Joe Biden shakes hands with an imaginary human being.

No, all these billionaires are fine and dandy.

But Musk is a tool of the devil. He doesn't fit into anybody's definition of what a "good" human being; no, the man is inherently "evil".

These ridiculous arguments have been articulated because one cannot claim Musk does not know how to run a business. No, that will really not wash; he has founded and runs two successful companies, Tesla and SpaceX.

Elon Musk got the entire ruling class to publicy come out against free speech. Incredible.

Voices have also been raised questioning whether he has the money to buy Twitter which, according to his own offer, should be about US$43 billion (A$58 billion). Most of his money is tied up in the two companies he runs.

But then, if he has sufficient assets — and he is said to be worth in excess of US$250 billion — it should not be too difficult to raise that amount towards the purchase of Twitter. That is a non-argument.

As to free speech, I really think it varies; one man's free speech is another's racism. the old argument about shouting "fire" in a crowded cinema comes to mind.

But what has remained with me over the years is something which Arjen Lentz, a techie from the free and open source community, told me many years ago: "In the Netherlands, freedom of speech is bound by the liberties of people around you; so I can exercise my liberties as long as they don't hurt the people around me. It is not absolute. I can't shout anti-Semitic abuse — not that I would, I'm Jewish myself — or other racial abuse because that hurts other people. I can't shout about religious opinions which hurt other people around me. In the USA, you can."

Musk is unpredictable. But then so are many businessmen; one never knows what they will do from one day to the next. It is laughable that a country which is willing to accept a president who shakes hands with non-existent people is making a fuss about Musk owning a social media company.

Another furphy is the objection by employees. Since when did employees decide who should own a company they work for? Given that Twitter has about 7500 people working for it, there will definitely be some who hate the owner, and yet continue to work there because they get a decent pay packet. Remember, no Twitter employee is being asked to cut down on urine breaks and pee into a bottle – something for which Bezos has been unmasked. 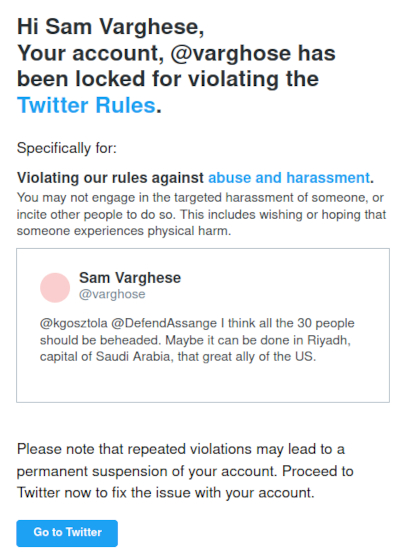 If Musk has been emboldened to make a bid for Twitter, then one can only blame the management which has shown blatant bias in censoring individuals who do not fit in with the thinking of the mainstream.

One of the latest to suffer has been former UN weapons inspector Scott Ritter, an American patriot if ever there was one. The system used to throw people off Twitter is simply crazy.

Why, Twitter once even banned me, a person who has at best 100 followers and one who has never sought to use it as a marketing tool. That makes the rules of the platform more of a joke than it would be otherwise.

I am one of the few who joined Twitter to listen to others, with most of those I follow being tech types. You do get some very good stories via Twitter, I must say.

When I sent one of my rare tweets, poking fun at a suggestion by former Trump official Mike Pompeo, that the people who served as sources for a story that the CIA was planning to kidnap and assassinate Julian Assange should be held to account, my account was locked.

The Twitter board has a duty to put the offer to its shareholders and follow their verdict. CEO Parag Agrawal has already put in place a so-called poison pill — allowing other shareholders to buy shares at a discount — to prevent Musk from increasing his ownership beyond 15%. He currently holds 9.2%.

Musk has hinted that he has a Plan B to buy the company, if his bid is rejected. One hopes for the good of the platform, that he succeeds.

More in this category: « AFR shows it does not know difference between poll and focus group Google exposed as it bids to show up Microsoft over security »
Share News tips for the iTWire Journalists? Your tip will be anonymous