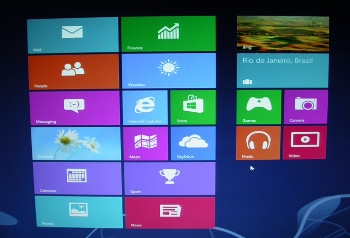 At the gates of Microsoft, there are numerous competing Windows versions now almost falling over each other as they strive for marketshare.

There's XP, the venerable warhorse, which businesses are reluctant to give up, but support for which officially expires only in 2014; there's Vista, the bastard child which nobody wants; there's Windows 7, which Microsoft wants everyone to move to as soon as possible; and there's Windows 8, the new kid on the block, hardly a month out in the open, and trying to be all things to all people.

There were a number of release candidates of Windows 8 in the run-up to the release to market on October 26, but there are quite a few noticeable changes, last-minute or otherwise, in the final release, which is named as build 9200.

Windows 8 is only about 64-bit releases; else, only about 3.2 GB of memory will be recognised and used. And you can't manage with that. Forget the officially stated minimum hardware requirements, it is a hungry beast and needs at least 8 GB to run at speeds that will not infuriate the average human being.

There were rumours before release that Windows 8 would only install on hardware that was certified by Microsoft, which meant that the BIOS on the motherboard in said box would support secure boot.

This is not the case. I installed Windows 8 Pro on an old PC, one built in 2007, and after some time was consumed by the operating system checking the BIOS, the software did install, though it took a fair while to do so. This, by the way, was a clean install, not an upgrade.

But it ran painfully slow, given that the machine had 4GB of memory and a dual-core AMD processor from 2007.

There are a few noticeable changes from the past. For one, the End User Licence Agreement, which used to be mostly legal gobbledygook, is now much more understandable; part of it has been redone in a Q and A style and the average person will be able to understand this portion, if not the remainder.

As someone who does fiddle with Windows a fair bit for the purpose of writing about it, despite being a GNU/Linux user, it is apparent that Windows 8 does have a lot of cosmetic changes. Many features that were part of Windows 7 are present, but one can access them through different ways than they did in Windows 7.

But one thing which appears to be gone is the old start menu. With the release candidates, there was a method of getting it back through a registry change; this appears to have been removed. I could be wrong though, and if any reader cares to correct me I would be delighted.

Windows 8 cannot correctly pick the time zone; it came up with a time three hours earlier than the actual time. The system also does not offer the choice of connecting to the internet via a static IP on a LAN; one has to burrow down into the internals to find the old menus through which this can be done.

For the rest, apart from the new desktop with all its tiles, there is not much to write home about. Microsoft is trying to get people to move to its own cloud and that is evident after a period of use; like Apple, it wants you, the user, to do everything with its applications and devices. But then that isn't new.

What is more interesting is installing Windows 8 with secure boot. That will be my next piece tomorrow.

More in this category: « Did Sinofsky jump or was he pushed? Installing Windows 8 with secure boot »
Share News tips for the iTWire Journalists? Your tip will be anonymous