One of the biggest talking points in the run-up to the release of Windows 8 has been the feature that will supposedly lock down the operating system so that it cannot be infected by malware at boot-time.

Called secure boot, it is a feature made possible by the emergence of a replacement for the old BIOS (basic input output system). Known as UEFI (unified extensible firmware interface), it is now making its appearance in motherboards. (It is now commonly referred to as the UEFI BIOS and I shall use this term throughout this article.)

Microsoft has done its own implementation of secure boot for reasons it refuses to divulge; the public statements are that it is done for the security of users. A process of matching of cryptographic keys takes place at boot-time to ensure that one is booting a genuine copy of Windows 8 and that it has not been tampered with.

All Windows 8 PCs or laptops that are sold by grey-box or other dealers come with secure boot turned on. This means that one cannot install another operating system, either to replace Windows or as an addition, on the same box. Not unless the operating system can boot on a box that is configured for secure boot. Else, one has to get into the UEFI BIOS and turn off secure boot. This is possible on the x86 platform.

Motherboard manufacturers appear to be loath to use the term "secure boot" on their packaging; ASUS has a "Windows 8 ready" sticker on some boxes, with an instruction that readiness may depend on the updating of the BIOS or the installation of drivers. Gigabyte, as yet, has no boards that support secure boot for general purchase in Australia; at least not at the dealer I visited, MSY, one of the bigger franchises selling computer parts in the country.

Micro-Star International (MSI) has a sticker on the box of some boards saying "Windows 8 compatible". This is misleading as even older boards are compatible with Windows 8, just not with the newer features like secure boot. But what the manufacturer really means is that one can use the new Windows 8 features, including secure boot. At this stage, it requires an upgrade of the UEFI BIOS.

Finding a motherboard that supports secure boot is thus somewhat difficult. The dealer did have an ASUS board (P8Z77M) that I knew would be fine as one enterprising blogger has tested out a variant and installed Windows 8 with secure boot enabled. But, then, it is no fun going where others have already gone; hence I opted for an MSI board, a Z77A-G41.

An Intel i5-3330 processor and 16GB of memory were the other parts I needed to upgrade the PC on which this experiment was to be carried out. This board has no IDE interfaces so I had to buy a DVD rewriter that is connected by a SATA cable.

In the last 13 years of building systems, I have bought MSI boards only once, when building a batch of 20 PCs for a charity. That turned out to be a bad experience and I have never bought anything other than ASUS or Gigabyte before and after this purchase, with a preference for ASUS boards as they are not as conservative as Gigabyte.

MSI's implementation of the UEFI BIOS is neat; it can be navigated using a mouse. One enters the interface the same way one did in the past with machines that have a BIOS supplied by AMI - hit the Delete key a few times as soon as it is switched on.

One can update the UEFI BIOS without entering the operating system interface, but this can be done only if a Linux-based utility named Winki, available on the manufacturer's DVD, which contains other drivers as well, is installed. This board needs an update to support secure boot.

My first install of Windows 8 was, thus, done without secure boot. After installing the utilities that the manufacturer provides on a DVD, I upgraded the UEFI BIOS to the latest version as of November 19. 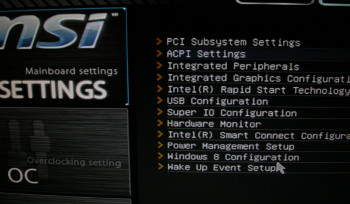 I then entered the UEFI BIOS and began looking around. After a while, I gave up and began wondering if I had bought the wrong board. Inserting an Ubuntu start-up CD indicated to me that secure boot had not been turned on by the system on its own after the upgrade, as Ubuntu booted to its regular interface.

Searching the Windows 8 install provided no clue either. But after digging deep into the UEFI BIOS I finally discovered an option titled Windows 8 configuration (seen above) under the Advanced option for mainboard settings. 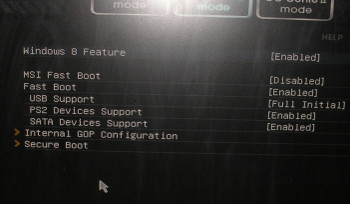 Two steps beneath that was the menu item Secure Boot (above). Hurrah!

Below this is an option called Image Execution Policy (below) that can be used to specify how the system treats images which are presented at boot-time; all images that support secure boot can provide the option of being booted if one selects the proper choice. 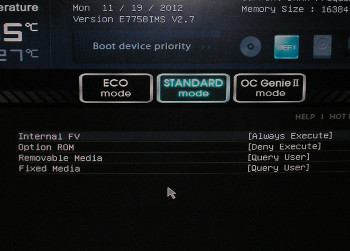 More important is the option of Key Management (below); here I installed the manufacturer's keys which will always support secure boot for Windows 8. There appears to be scope to install other keys as well but that experiment will have to wait until some other operating system which is designed to boot on a secure boot-enabled PC turns up. Some GNU/Linux distributions like Fedora, openSUSE and Ubuntu have versions in the works. 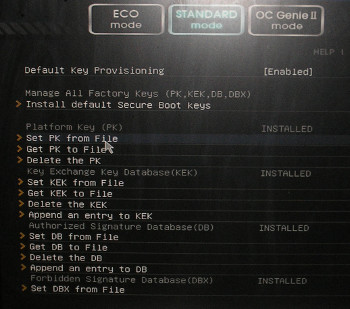 Once secure boot is turned on, one no longer has access to the operating system that was installed without this feature turned on. I had to reinstall Windows 8, and chose to wipe the first install as I no longer needed it.

After this is done, the machine ignores any other bootable medium that is inserted at start-up - unless it supports secure boot.

One can also check for secure boot by opening a Windows PowerShell as an administrator and keying in "confirm-securebootuefi". If secure boot has been set up correctly, the output that is returned is "True" . (below)

More in this category: « Installing Windows 8 without secure boot Ubuntu 12.10 and Windows 8: an uneasy marriage »
Share News tips for the iTWire Journalists? Your tip will be anonymous