Google helping Clinton get ahead in US poll 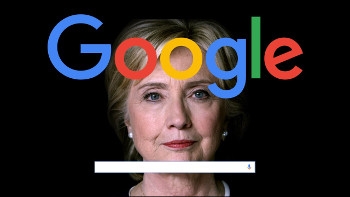 Google searches for subjects related to the Democratic presidential candidate Hillary Clinton appear to show her in a favourable light when compared to searches for the same subjects in other search engines. 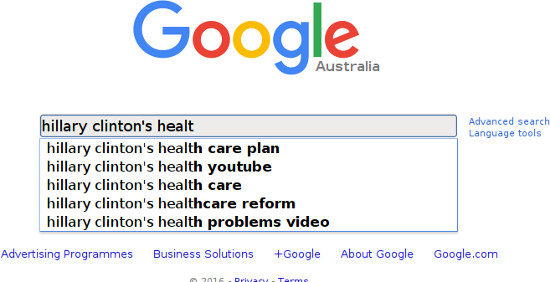 The subject of Clinton's health problems, which were illustrated when she collapsed at a memorial for victims of the September 11 terrorist attacks, is the last on the auto complete list.

In sharp contrast, searching for the same string in Microsoft's Bing brings up "health", "health problems", "health issues", "health news" and "health concerns" as auto complete strings. There is no mention of the health care plan at all.

Similar results are evident when one searches for "Hillary Clinton is". In Google, this results in auto complete options of "israel", "a robot", "awesome" and "dead".

In Bing, the auto complete options for this search are "not a leader", "deplorable", "totally beatable" and "allowing sharia law".

Google's support for Clinton is no secret. Eric Schmidt, the chairman of Alphabet, Google's parent company, set up a startup some time back to provide technical expertise to the Democrat candidate. 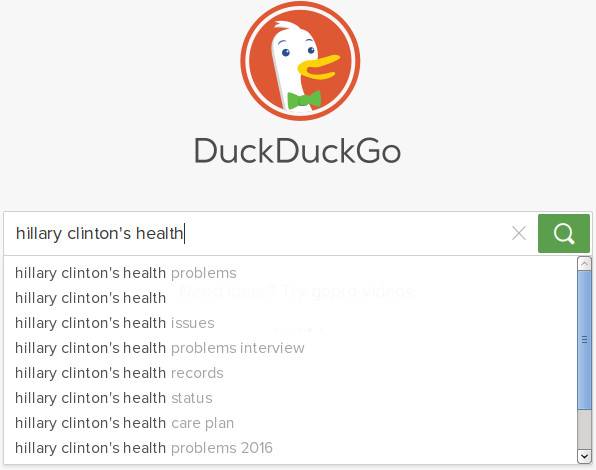 Thus, there is no guessing at to what one of the most powerful men in the technology industry would like readers to see on the Web when they search for material related to Clinton.

The auto complete feature works in the same way that Google claims it search results do: through popularity. So exactly how one search engine shows up one thing and a second an entirely different one is puzzling in the extreme. Indeed, it would suggest that Google is gaming its own results to show Clinton in a favourable light. 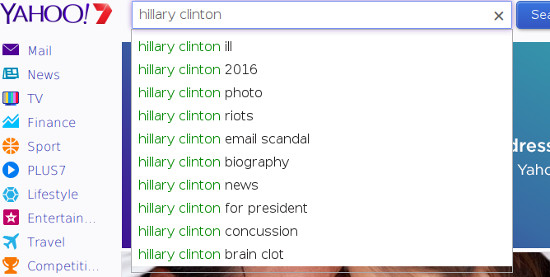 To say that Google dominates Web search is to state the bleeding obvious. In mobile search, Google has more than 90% of the market. In desktop search, it is a little more than 70%. Thus its influence on Web users is massive.

In August last year, the tech publication Wired carried an interesting article titled "Google's search algorithm could steal the presidency". In it, author Adam Rogers wrote about a study that had concluded the order of search results and the ranking of positive or negative stories could can have an enormous influence on the way people vote.

The article quoted Robert Epstein, a psychologist at the American Institute for Behavioural Research and Technology and one of the authors of the study, as saying: "We estimate, based on win margins in national elections around the world that Google could determine the outcome of upwards of 25% of all national elections."

In a separate article, Epstein wrote: "When Google's employees or algorithms decide to block our access to information about a news item, political candidate or business, opinions and votes can shift, reputations can be ruined and businesses can crash and burn."

Such discrepancies in Web searches are, thus, only to be expected.

More in this category: « Galaxy Note7 debacle shows Samsung in poor light Twenty and counting: KDE marks another milestone »
Share News tips for the iTWire Journalists? Your tip will be anonymous