From Windows to Linux: a sound decision

Five years ago, when Geoff Beasley decided to move his sound studio business from a Windows-based one to a Linux-based setup, he had one simple bit of logic driving him: things could not be worse under Linux.


Indeed, Beasley, who has been playing around with Linux since 1997, had reason to believe that they would be much better. Today his expectations have been more than realised; Laughing Boy Records, his little studio in Preston, a suburb of Melbourne, is an all-Linux shop.

He lists himself as a producer, composer, arranger and performer and in times when the number of gigs that a small musician is involved in has fallen from about 20 down to a couple a year, he has to do all of these tasks to keep going. 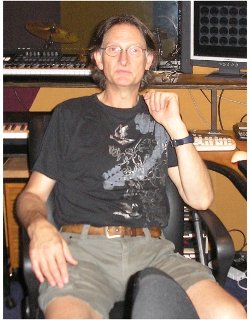 Not having to pay for licences for Windows and the associated software helps the bottomline. But for Beasley the reasons to run Linux go far beyond that. "I'm surprised that the take-up of Linux for pro audio is so little," he told iTWire during an interview at his little studio. "It may be that people are not aware of the possibilities that are available when you move over."

When Beasley first looked at Linux, it was Mandrake (now Mandriva) with KDE 2.0 that he picked up along with a PC magazine. "My initial impression was that I could survive in that environment," he said.

But it took seven years before Beasley decided to make the move. His Windows set-up caused him constant headaches, with the crashes of both applications and operating system, and given the level of use he was putting his machines to, he had to reinstall at least twice a year. The software also imposed severe limitations on creativity. All this time, he kept track of developments in audio software for Linux through the website of Dave Phillips, whom he describes as "one of the great movers and shakers in Linux audio."
By 2004, the Linux audio application Ardour had gotten to the point where Beasley reckoned that he could make the switch. He still kept using a Windows machine for midi sequencing.

But then one night it all changed. Rushing to complete some work, Beasley found himself using Internet Explorer and, after mistakenly typing the word "gfoogle" in the search bar, got diverted to a spyware site. His machine was taken over and he had to wipe it clean in order to use it again.

He's honest and forthright about the switch. "For a while, I had less functionality when I moved over. But this has improved to the point where things are just fantastic," he says. "I'm no developer, I'm just another long-suffering user, I've only helped to iron out lots and lots of bugs."

There's a tone of genuine gratitude in his voice as he lists some of the developers with whom he has had a constant back-and-forth over the years - Paul Davis, Torben Hohn, Rui Nuno Capella - as he has discovered bugs and communicated his needs to them.

The switchover hasn't necessitated any hardware changes. He uses eight machines in all, all placed in the space above his ceiling. His set-up is neat and utilitarian; it speaks of a man who pays attention to detail, loves his music and the tools he uses to create it.

In 2006, Beasley attended the Linux audio conference in Karlsruhe, Germany. Shortly before that, Hohn had released NetJack which allowed for the networking of machines running the sound server Jack. NetJack also provided an advantage in that it used Jack transport which clocked to the rate of the sound cards under use. Software written to the Society of Motion Pictures and Television Engineers standard allowed for a maximum of 30 frames. The speed and accuracy of the sync is substantially improved by using Jack transport which in turn has very high resolution - 48000 frames versus a maximum of 30 frames for SMPTE.
"There's a great difference between working with commercial software and Linux," says Beasley. "One is the speed at which things get fixed - it is simply amazing. Another thing is that though I am always running software which is in a constant state of development, it is incredibly stable. It is not possible to get fixes at this speed from commercial vendors - the guys I work with are driven by the sheer elegance of their software and its flexibility. And I am constantly amazed at what I can do with my limited knowledge."

Apart from one machine which does video, the studio is more or less complete. This machine needs some infrastructure to be purchased and installed - monitors in each room and a few more cams. "But at its worst, it's no worse that the commercial alternatives. Additionally, Wine (the emulation layer used to run Windows apps on Linux) is now good at supporting Windows applications to run very reliably on Linux," he says.

Beasley initially ran his setup using Red Hat 9, depending on the RPMs from Planet CCRMA for his applications. He then moved to Gentoo for a couple of years. A chance remark on a forum about ArchLinux ("it's Linux' best-kept secret") made him decide to have a look at that distribution and once he landed there, he has stayed on. All his machines run ArchLinux now. "I realised early on that I would have to make a commitment if I was going to do what I wanted to do," he says. "Commercial software has a business model - the more broken it is when released, the more people can promise to make it better. That doesn't happen with the software that I use."

Lest one think that Beasley is someone who has nothing to do but tinker with computers all day, let me point out that he is no stripling; at 54, he has nine children. Linux helps him earn his livelihood - and a pretty good one too. His eldest son, Llewellyn, was working with his dad until he decided to split off and run his own setup. All the kids use Linux, with Ubuntu being the distribution of choice. His wife, Annette, is a midwife.

"In creative environments like this, Linux is stable," Beasley says as I get up to leave. "The developers don't lie, any problem is a shared one and we fix it together. By contrast, I asked a question on a Matrox mailing list about 11 years ago - and I'm still waiting for a response."

He shakes his long hair back over his brow. "This (pointing to his studio) is science," he says. "Windows is commerce."
Beasley's set-up:

All 5 of the production machines have the following subsystem:

LinAS
LinAS is the audio master machine. It hosts 4 Hoontech C-Ports (ice1712-based chipset) in an Alsa multi-array providing 40 channels of audio to the other machines via 'netone'. jack is running with 2 periods @ 48kH and 64 frames giving a 'round-trip' latency (in and out) of 2.66 ms . Can be run @ 32 frames (half the latency) but the samplers struggle at this low a frame rate.

LinSampler
Uses the program fst (free software studio) by Torben Hohn to run vsti's (virtual studio technology instruments) under wine. The two I run are Kontakt 2 and Sampletank 2. Both work 100 percent maybe better than under Wine.

LinVS
This is the 'Video Server" This one specialises in distributing video throughout the complex via webcams using 'Cheese' to mount them. Kdenlive and capture cards are used to take interviews of Composers and Performers for web-based content enhancement. Qjadeo is used to playback vision also piped throughout.

More in this category: « Dealing with gifted kids: a geek's tale Learning with the computer using open source »
Share News tips for the iTWire Journalists? Your tip will be anonymous