0
Shares
By Sam Varghese
Any parent who comes to the realisation that his or her child is gifted generally feels conflicting emotions: happiness and confusion. Happiness over the fact that one has an unusual child and confusion over how one is going to deal with this child.


For a geek, the situation is much the same. When Andrew McMillan (below), a senior Debian GNU/Linux developer and a free software geek, found out that his elder son, Max, was unusually gifted, he reacted as any loving parent would.

"When my son first went to school we had lots of problems with his schooling when he was five," McMillan told iTWire in an interview. "The school brought us in on various occasions to work out how they were going to try and cope with this child who was difficult for them to deal with in class. 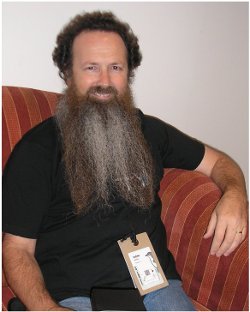 "As a result of that we went to a psychologist and got a full IQ test done and things like that. And he was assessed as being extremely gifted. He had a reasoning score that was in the top 0.2 percent of the population, and he had a processing speed score which was in the bottom five percent. It was quite an unbalanced sort of thing, which means that he could take a very long time to do something but what he did at the end of it was reasoned very, very well.

He and his wife, Heather Buchanan, had seen some difference much earlier. "We noticed certain elements of his unusual nature when he was two. When kids first learn to talk they learn to say yes and no. But when he was learning to talk, we would ask him a question - 'would you like to blah?', and he would say 'I would', rather than saying 'yes'. He had very unusual speech patterns and by the time he was three any adult he met on the street could understand what he was saying."

McMillan says the school managed to take some action around it and he got involved with the New Zealand Association for Gifted Children. "There's a Wellington branch of the association and I was president of that for a few years; I'm still on the committee. And I was on the national board for the national association. As a free software geek I'm into communities and things like that, so I find it reasonably easy to get into that sort of thing."

The association is a social network for parents and families with gifted children. "Often you find yourself in this sort of situation and you can feel quite lonely, so it provides an opportunity for the children to experience things together, for the parents to discuss the difficulties that they are having together," McMillan explains.

He and Heather have two sons; the younger one, Fraser, is also gifted but in a different way. "Fraser does not have the same reasoning ability that Max does. Max is extremely logical and deep-thinking, but Fraser has his own unique characteristics, particularly around relating to people," McMillan says.

"To some extent, he's been a little bit of a guinea pig for the school. But we have a very good relationship with the school now. And he also goes one day a week to a one-day school which is specifically for gifted children."

In New Zealand, there are schools like this in every city. "I think there are four in the Wellington area," McMillan says. "This is how it is frequently handled in New Zealand where there are one-day schools, where the child is taken out of their normal class for one day of the week.

"And when Max started at one-day school, it was a huge relief. There was a relief both to Max that he had one day when he wasn't in the classroom situation that was quite difficult for him, and the classroom that he'd come out of had one day when he wasn't there. And they didn't have to work so hard to extend their teaching in a different direction."

To McMillan and his wife, Max was just another normal kid. "My wife and I are both pretty smart too, and we didn't see anything unusual in his behaviour because that was our only experience of having a child," he says.

"Other people outside did see him as unusual. When he was at pre-school, he invited his teachers to his birthday party. They said that he was the first child who had ever invited them to a birthday party in 30 years of teaching pre-school. Hence, whenever they didn't know something at pre-school they asked him, which is not that normal - preschool teachers normally know more than their charges."

McMillan says that some things are still different when it comes to their elder son. "He's 12 now and he has an adult reading age. We go to a cafe and he gets bored. He goes and reads the paper, you know, because he needs to read something.

"He wanted me to upgrade his computer from Ubuntu to Debian because Debian displays a whole lot of scrolling text as it boots and Ubuntu displays a moving bar. He found the moving bar appeared to take forever, whereas the scrolling text was something he could read."

As McMillan is a software developer, his son also gets a lot of exposure to computers. McMillan says he's not sure whether Max will go into the same line as him. "Inevitably, he's got a lot of exposure to computers. He does some programming with Scratch and I'm starting to teach him to use Python. We'll see if he goes down my line. He's interested in other things, he likes cooking, he likes writing and drawing, so he's quite artistic."

What advice does McMillan have for other parents who may have gifted children? They should realise "that every child is different," he says without hesitation. "Some extremely gifted children have a very difficult time, particularly when they're reading at the age of two. It can be difficult to convey the difference to the school. "

Mcmillan says he and his wife were very fortunate to go to a psychologist, and to have her help in advocating for them with the school. "She came along with us when meeting people from the school and was able to provide a formal analysis and formal information which the school had to take note of.

"A lot of the time parents going to advocate for their children are not treated as being authoritative in any way. When you can bring a formally qualified person to bear on it, it can be extremely helpful. But it can be a costly process as well, because psychologists are highly qualified people and can cost a lot."

McMillan says that while gifted kids can be somewhat pedantic and, at times, annoying, they are very funny too. "The sense of humour that we get out of Max is worth it," he adds.

And he says that while Max is ahead of where he was when he was 12, he is not ahead of his father now. He can understand Max's reasoning because "we think in similar ways. I mean, a lot of his style of thinking is from the family that he's grown up in".

Max has told his father a little about what he would like to do once he grows up. "He's talked about it a little. He plans to go to university, and he wants to train as a chef before he does that, so he's got some sort of a trade that he can use to help pay his way. He'll probably train as a chef first and then we'll see what he does after that."

McMillan says there have been cases where schools have not coped half as well as happened in his case. "I've heard horror stories of schools, and the children not fitting into the schools and parents not being able to come to any negotiated agreements with schools. There are all sorts of things that can go wrong."

More in this category: « Memo to Google: please Buzz off! From Windows to Linux: a sound decision »
Share News tips for the iTWire Journalists? Your tip will be anonymous