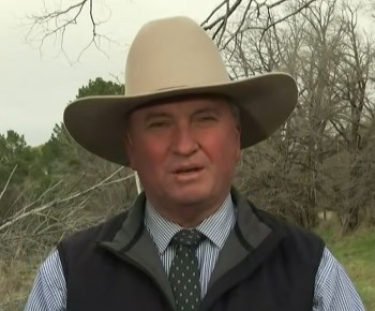 Barnabu Joyce has set the cat among the pigeons. Courtesy YouTube

Say what you like about Barnaby Joyce, the Australian deputy prime minister knows when to interject himself into an issue and make himself relevant. He has very finely tuned political antennae.

That's what he has done in the case of WikiLeaks publisher and founder Julian Assange, saying that he does not support the man's extradition to the US, and that he should be tried in the UK and then either jailed in that country or Australia.

Joyce knows only too well that the government of which he is part will take the Assange issue seriously only if it becomes an issue in the forthcoming federal poll. And he has ensured that it will, given that his, and National Party, views, will be treated very politely by Prime Minister Scott Morrison given the existing wafer-thin majority the government commands.

A rally in support of Assange. Silence from the NYTimes, WaPo and others who published and profited from his journalism. Inconvenient Truth=Criminal Charges pic.twitter.com/Vjg5AA0SaD

Assange's extradition to the US was given the green light by a two-judge High Court bench in the UK last Friday; the next step will be the cancellation of a lower-court verdict blocking the extradition.

British Home Affairs Minister Priti Patel will then have to decide whether to accept the change of verdict; if she does, then Assange can approach the Supreme Court to see if that venerable institution will hear an appeal. If he is turned down, then the final port of call could be the EU Court of Human Rights.

Morrison can easily intervene in this mess if he so desires – but, like John Howard, he will only put his fingers into the pie if the issue is harming his electoral prospects.

The Assange issue is not actually complicated. The most powerful government in the world is trying to extradite a journalist and try him under the Espionage Act for exposing its war crimes. It is that simple. This isn't some super complex subject that you defer to the experts on.

Years ago, when Australian David Hicks was arrested by the Americans in Afghanistan and taken to the US, he was held there on one pretext or the other — there are still people imprisoned in Guantanamo who were taken into custody during that same period — until he became an electoral liability for Howard.

John Winston then made a personal appeal to Dick "Kaboom" Cheney, telling the then US vice-president, the power behind the throne, that Hicks was causing his standing in the polls to plummet.

Cheney pushed for a plea bargain and Hicks was sent back to Australia within a few months. Given Britain's desperation for trade deals in the wake of Brexit, it would not be a great feat to put pressure on the British prime minister Boris Johnson to cut a deal on Assange.

Julian Assange is being targeted for exposing US war crimes - in Iraq, Afghanistan and Guantanamo Bay.

Extradition to the US is not only an attempt to silence him - but to stop all journalists from speaking truth to power.

We must continue to oppose his extradition to the US.

Morrison could have done something similar when Joe Biden came to power, given the fact that he [Biden] supported Barack Obama when the latter decided he could not sue Assange without also suing some of the world's major newspapers, and hence abandoned the idea.

But when has Morrison done anything unless he stands to gain personally? That he is in thrall to Joyce and the Nationals is clear, given the way he has been pushed around over the past 11 or so months.

Democracy dies in the dark.
My @smh @theage cartoon. pic.twitter.com/01i02i0gdL

There are a few Australian politicians who understand the real implications of the Assange issue, among them people like Andrew Wilkie and Rex Patrick. It is time for them to step up as well, and increase the pressure on Morrison.

Assange is said to have suffered a stroke after the Friday hearing. The time to act is now and if Morrison cannot see that, then one would have to seriously doubt his political acumen.

More in this category: « Op-ed on electric vehicles omits facts that don't suit its arguments For Christmas, Bloomberg delivers a fairy tale about Huawei »
Share News tips for the iTWire Journalists? Your tip will be anonymous